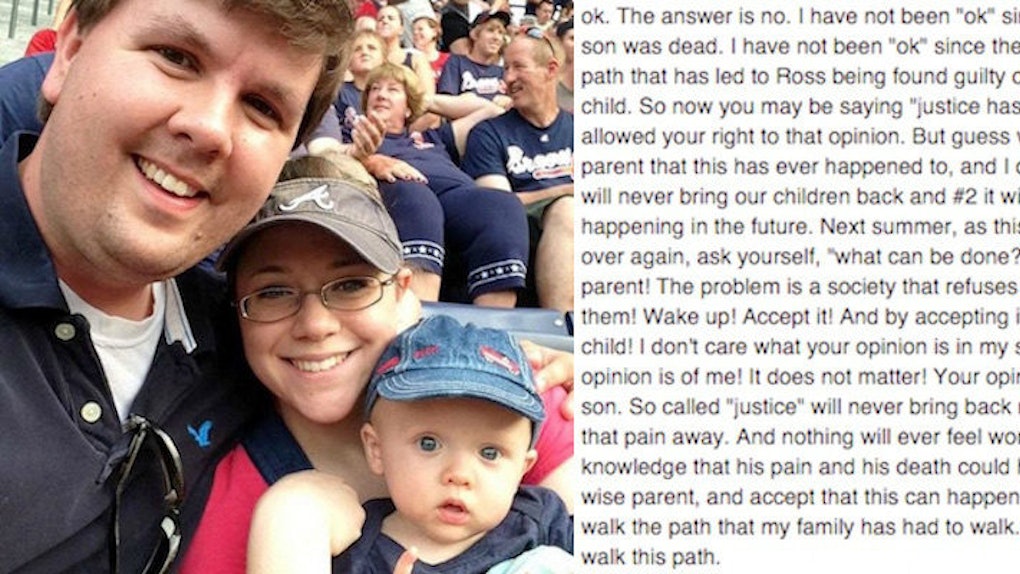 Justin Ross Harris was put on trial last month after he allegedly left his 22-month-old son to die in a scorching car while he sexted women and went to work in June 2014.

His vehicle was parked outside a Home Depot in Marietta, Georgia, where he was employed.

Apparently, the temperature inside the car reached 120 degrees, and his son, Cooper, cooked to death.

However, Cooper's devastated mother has not found justice in the case.

In the post, Taylor allegedly claimed she is "not OK," and that she hasn't been since she discovered Cooper was dead.

Rebecca Lindstrom of 11Alive re-posted Leanna Taylor's alleged Facebook status, and the statement she made serves a lesson to all parents who risk the possibility of having their child killed in a hot vehicle.

So now you may be saying "justice has been served." And you are allowed your right to that opinion. But guess what, you can convict every parent that this has ever happened to, and I can promise you 2 things ... #1 it will never bring our children back and #2 it will not prevent this from happening in the future.

Taylor then continues in her post about how parents can easily prevent such a tragedy from happening to one of their own.

Next summer, as this begins to happen over and over again, ask yourself, "what can be done?!" The problem is not the parent! The problem is a society that refuses to believe this can happen to them! Wake up! Accept it! And by accepting it you will be protecting your child!

Her message is harrowing and extremely true.

Cooper's death could have easily been prevented if it wasn't for Harris's hidden agenda.

Apparently, he had been sending sexts to multiple woman. According to Daily Mail, investigators believe he didn't want his son in his life so he could follow through with his affairs.

In the remainder of Taylor's post, she admitted she doesn't care what kind of opinions people have about her, because no justice will bring back her son.

She closed her statement with,

Even though Harris has been found guilty of killing their son, her pain will never cease to exist.

Harris will be sentenced for the case on December 5.