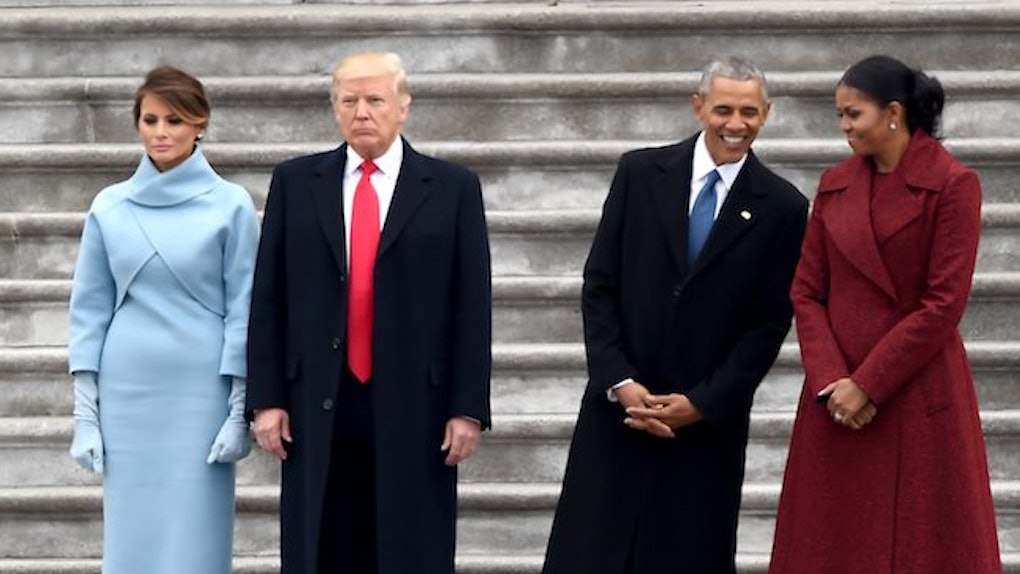 Photos Of Trump & Melania Vs. Obama & Michelle Will Bring The Nostalgia

All politics aside, I think we can agree that Michelle and Barack Obama are pretty much the definition of #relationshipgoals. Politics still set aside, can we agree that Donald Trump and Melania Trump are, ermm, possibly not the happiest couple out there? If you need further proof of these two theories, let's take a look at Trump and Obama with their wives, and play a little comparison game.

First off, for any of you who haven't followed the beautiful, *magical* timeline that is Michelle and Barack Obama's relationship, let me give you a crib sheet. Their romance started back in 1989, when Michelle was an associate at a Chicago law firm, and she was assigned to mentor a young Barack Obama. He liked her, asked her out, but she refused because she was basically his boss. He persisted, and finallllly, as he told Oprah.com, it happened.

I offered to quit my job, and at last she relented. On our first date, I treated her to the finest ice cream Baskin-Robbins had to offer, our dinner table doubling as the curb. I kissed her, and it tasted like chocolate.

So basically, like pretty much the rest of the world, Michelle could not deny that the man had style. But, more importantly, he had a good set of morals. She told graduates at Morgan State University,

All right, ladies, listen to this.  This is what I want you to be looking for. Yes, [Barack] was handsome--still is. I think so. He was charming, talented, and oh-so smart, truly.  But that is not why I married him. What truly made me fall in love with Barack Obama was his character. You hear me? It was his character. It was his decency, his honesty, his compassion, and conviction.

Now, let's go down the Donald and Melania Trump relationship timeline, shall we?

Trump met Melania in 1998, while he was dating Norwegian heiress Celina Midelfart. The two of them were attending a party together when he spotted Melania. He then (get ready to gag...) sent Midelfart to the bathroom so he could talk to Melania. He told Larry King,

I went crazy. I said... I was actually supposed to meet somebody else. And there was this great supermodel sitting next to Melania, and I was supposed to meet this supermodel ... I said, 'Forget about her. Who's the one on the left?' And it was Melania.

Melania wasn't super into it because, you know, he was on a date with another woman, but accepted his phone number. She recalled to Harper's Bazaar,

I said, "I am not giving you my number; you give me yours, and I will call you." I wanted to see what kind of number he would give me — if it was a business number, what is this? I'm not doing business with you.

The two dated, then briefly broke up because – according to a GQ interview with Melania's former roommate – there were "some trust issues with him at the beginning."

But on the plus side, their meet-cute timing was perfect.

"She ran into Donald just at the right time. She was just about out of money, at the end of her rope and about to move back to Eastern Europe," Melania's friend told the New York Post.

Okay, the timelines have been established. Now let's take a look at some photographic evidence.

Here are Obama and Michelle reading stories to children on the White House lawn.

Melania hating Donald Trump with every fiber of her being.

D'awwww so sweet. One more for good measure.

AND ALSO LITERALLY THIS.

The moral of the story? Find someone who will take you to get chocolate ice cream your first date.  And don't ever, ever go out with someone who asks you out while he's on a date with another woman.