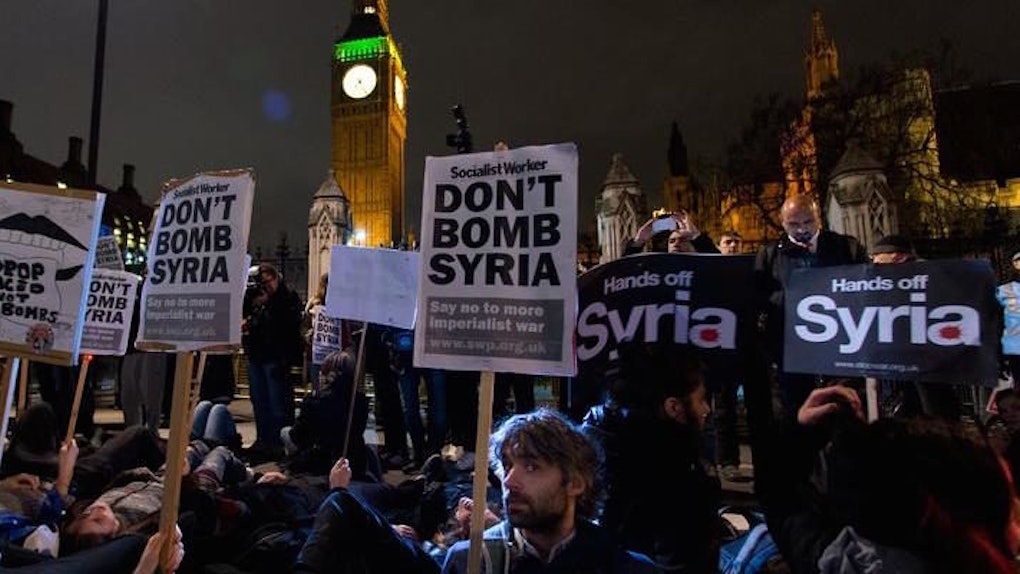 On Wednesday, the UK parliament voted to authorize Prime Minister David Cameron's plan for airstrikes against ISIS in Syria. The decision followed a contentious debate and occurred amid public protests.

Britain didn't take very long to act on this development and conducted its first airstrikes in Syria just hours later. Prior to this, the UK was only bombing ISIS in Iraq.

Ostensibly, Britain is completely justified in extending its military efforts against these terrorists to Syria.

ISIS is an abhorrent entity that condones genocide, sexual slavery and the brutal murder of innocent civilians. It's committed numerous atrocities and presents a clear threat to the world.

Unless you happen to sympathize with its radical and barbaric ideology (and I certainly hope you don't), you probably agree ISIS needs to be destroyed. Britain's airstrikes are part of a larger effort to accomplish this.

There's also the fact ISIS just claimed responsibility for the Paris terror attacks, and France happens to be a close ally of the UK. Following the attacks, French President François Hollande called for France's friends in the EU to aid it in the fight against the terrorists.

Moreover, the UN Security Council recently unanimously adopted resolution 2249, which called on UN members to take "all necessary measures in compliance with international law” to fight ISIS due to the "global and unprecedented threat to international peace and security" it presents.

Therefore, there are arguably ethical, strategic and legal justifications for expanding military action against these terrorists.

Many of these points were outlined in an impassioned and eloquent speech by Labour Party Shadow Foreign Secretary Hilary Benn as the UK parliament discussed the issue. Some might say his words ultimately swayed the vote in favor of approving the airstrikes. He said,

The question which confronts us in a very, very complex conflict is at its heart very simple. What should we do with others to confront this threat to our citizens, our nation, other nations and the people who suffer under the yoke, the cruel yoke, of Daesh? The carnage in Paris brought home to us the clear and present danger we face from them. It could have just as easily been London, or Glasgow, or Leeds or Birmingham and it could still be. And I believe that we have a moral and a practical duty to extend the action we are already taking in Iraq to Syria... We must now confront this evil. It is now time for us to do our bit in Syria. And that is why I ask my colleagues to vote for the motion tonight.

But the larger and arguably more important question that remains is whether or not this move will be effective, which is why there was such a heated debate in the first place.

In Benn's defense, he addressed many of the concerns surrounding the ultimate impact of airstrikes in his speech, but perhaps not as extensively as he could've.

Jeremy Corbyn, the leader of the Labour Party, is among those who believe bombing will not only be ineffective but make things worse (which makes things awkward between him and Benn as members of the same party).

Corbyn, like Benn, agrees ISIS is a threat and an evil that must be confronted, but he does not believe airstrikes are the way forward.

In a recent op-ed published by The Guardian, he said,

The prime minister has been unable to explain why extending airstrikes to Syria – which is already being bombed by the US, France, Russia and other powers – will make a significant military impact on a campaign that has so far seen Isil gain territory, such as the cities of Ramadi in Iraq and Palmyra in Syria, as well as lose it.

Correspondingly, some experts believe bombing won't necessarily hurt the situation, but won't have a significant impact either. Malcolm Chalmers of the Royal United Services Institute, a think tank that focuses on international security, contends,

[Airstrikes] will not make a big operational difference. It is important symbolically, useful operationally, but not transformative. A willingness to deploy will allay the concern that the U.K. is not a reliable partner.

When one looks at the recent history of Western military interventions in the Middle East (Iraq and Afghanistan), as well as the overall impact of US-led airstrikes against ISIS in Iraq and Syria thus far, it's hard to disagree with these perspectives.

The US conducted 6,692 airstrikes against ISIS in Iraq and Syria since August 2014, spending $5.2 billion ($11 million a day) in the process. The rest of the coalition has conducted an additional 1,881 airstrikes.

This means the US and its allies bombed ISIS 8,573 times, but it's still standing, still staging attacks and still recruiting.

It's true US airstrikes have been effective in some respects, and recently helped Kurdish Peshmerga fighters retake the Iraqi city of Sinjar. From a broader standpoint, however, they've largely done little but simply contain ISIS when the goal is to destroy it.

There's also evidence coalition airstrikes killed innocent civilians in Iraq and Syria and will continue to.

This is often because in places like Raqqa, ISIS' capital, the terrorists are mixed in with the local civilian population. ISIS doesn't care about the safety of civilians and hiding among them is almost certainly a deliberate tactic. These people are not currently sympathetic with ISIS, but if their friends and relatives continue to die in Western-led airstrikes this could quickly change.

Indeed, airstrikes often only serve to increase enmity toward the West while risking the lives of innocent civilians who've already suffered in ways most can scarcely imagine.

But that doesn't mean we should support the use of Western ground forces (particularly from the US or the UK) as such a move would undoubtedly exacerbate a conflict that's already complex enough as it is.

It will take international cooperation combined with collaboration with local people and military forces to establish lasting peace and political stability in the region. ISIS will not be defeated through military force alone.

The international community also needs to make a more concerted effort to resettle refugees while assisting those that are currently in Jordan, Lebanon and Turkey (where the largest populations of Syrian refugees reside). Helping refugees hurts ISIS, and must be a part of the larger strategy to defeat it.

You can't ram democracy down people's throats, it has to be built through dialogue, humanitarianism and compromise.

The issue is not that airstrikes are never helpful, it's that they're currently being employed as the prevailing strategy in this conflict when they're merely a tool of warfare. This is not viable in the long-term.

Yet again, Western states are exhibiting short-sighted logic in their approach to the Middle East.

There are already enough bombs raining down on Syria and the UK government just helped ensure this will continue for the foreseeable future.