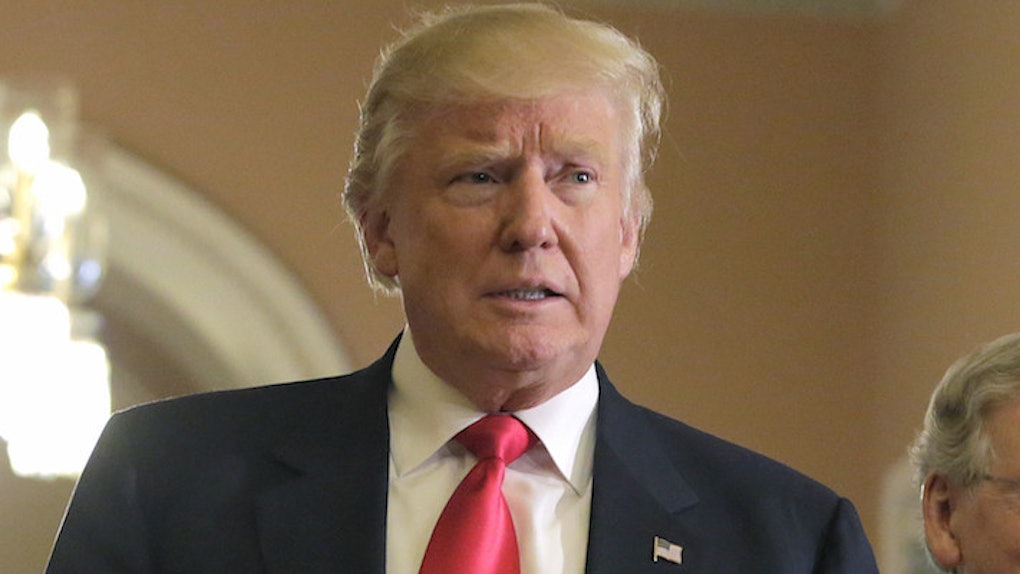 It's official -- Donald J. Trump is the President-elect of the United States of America. I'll say it again for the people in the back...

Actually, no I won't. It gives me a headache just thinking about it.

As Hillary Clinton's supporters continue to mourn following her devastating loss to the 70-year-old real estate mogul and reality TV star, quite a few citizens have taken to the streets to protest the stunning election results.

Their goal? The complete opposite of having Trump behind the wheel of America.

People have been wondering if Trump even has ANY clue about the mass protests going on around the country.

Does he know? Does he care? Is he tucked under a gold-embroidered blanket on the top floor of Trump Tower sucking his thumb and ignoring the protests at the ground level? These are all valid questions.

After all, Trump has been pretty quiet on social media following the presidential election -- until now.

Let's face it, the old Trump (from, like, two weeks ago) would've addressed the protests immediately and probably found a way to blame Clinton for it.

He even blamed the media for inciting them, you know, because he can't blame Hillary for everything under the sun anymore.

Here's Donald Trump's tweet about the widespread protests as a result of him being elected to be the next POTUS.

I think what Trump fails to realize is that these protests weren't even being picked up by several publications that make up the mainstream media.

As a matter of fact, most of the word about the protests began circulating on social media first.

I personally witnessed hundreds of people take to social media pleading for media publications to pick up coverage on the protests and spread the word.

Still, Trump has this rather strange idea that the media has something to do with the assembling and organizing of the outrage against him and his presidency. No, those are American citizens.

Not to mention, he thinks the protests against him are "unfair..." Are you even surprised?

Prior to his tweet about having "a very open and successful presidential election" and blaming the media for "very unfair" protests against him, Trump had a SUPER awkward meeting with President Obama in the Oval Office.

When I say awkward, I mean AWKWARD.

Meanwhile, a random woman ran into Hillary Clinton after the election while jogging through the woods. What a time.