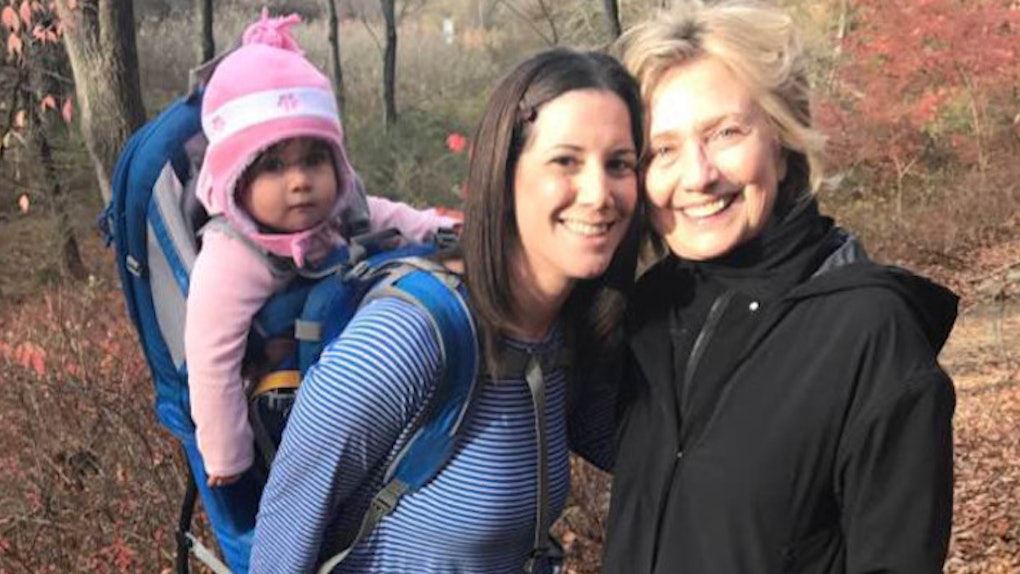 With the world still in utter shock following a roller coaster of a presidential election, everyone's been wondering how Hillary Clinton's coping with such an upsetting loss.

Well, what if I told you that Hillary Clinton went hiking the day after conceding to president-elect Donald Trump? Because that's exactly what she did, folks!

Now, I know this sounds super weird, but Hillary is actually a human being. No, she's not constantly wearing a pantsuit and hand-delivering wise words to our great nation during every second of the day. She has a life, and she's just like us!

Here's how it all went down.

A woman named Margot Gerster, along with her baby daughter, had been walking her dog in the woods in Chappaqua, New York.

The New Yorker had been at the right place at the right time because when she looked up, there she was -- Hillary Rodham Clinton going for a peaceful hike in the woods.

I've been feeling so heartbroken since yesterday's election and decided what better way to relax than take my girls hiking.

It's a good thing she did! While on a calm, serene walk with nature, Hillary Clinton just happened to be there with her dog, too.

Here's the photo of Margot Gerster running into Hillary Clinton while walking through the woods in Chappaqua, New York.

What are the odds of that happening?! Here's the full caption Gerster attached to the photo:

I've been feeling so heartbroken since yesterday's election and decided what better way to relax than take my girls hiking. So I decided to take them to one of favorite places in Chappaqua. We were the only ones there and it was so beautiful and relaxing. As we were leaving, I heard a bit of rustling coming towards me and as I stepped into the clearing there she was, Hillary Clinton and Bill with their dogs doing exactly the same thing as I was. I got to hug her and talk to her and tell her that one of my most proudest moments as a mother was taking Phoebe with me to vote for her. She hugged me and thanked me and we exchanged some sweet pleasantries and then I let them continue their walk. Now, I'm not one for signs but I think I'll definitely take this one. So proud. #iamstillwithher #lovetrumpshate#keepfighting#lightfollowsdarkness

I totally agree with Gerster. This has to mean something...

This isn't the first time Margot met Hillary. Back in high school, she had been at a fundraiser her mother hosted at the Kittle House in Chappaqua, New York.

Hillary was a guest of honor at the event, according to Gerster's Facebook.

Overall, it's just good to see Hillary Clinton out and about with Bill and her pup following a stunning loss to President-elect Donald Trump on Election Day!

She's a true warrior and a true boss in every sense of the word. This should help everyone else who's been feeling down lift themselves up, get back out there and #KeepFighting.

Citations: This Is Good Facebook: Mother and Daughter Hikers Run Into Hillary Clinton in the Woods (NY Mag)