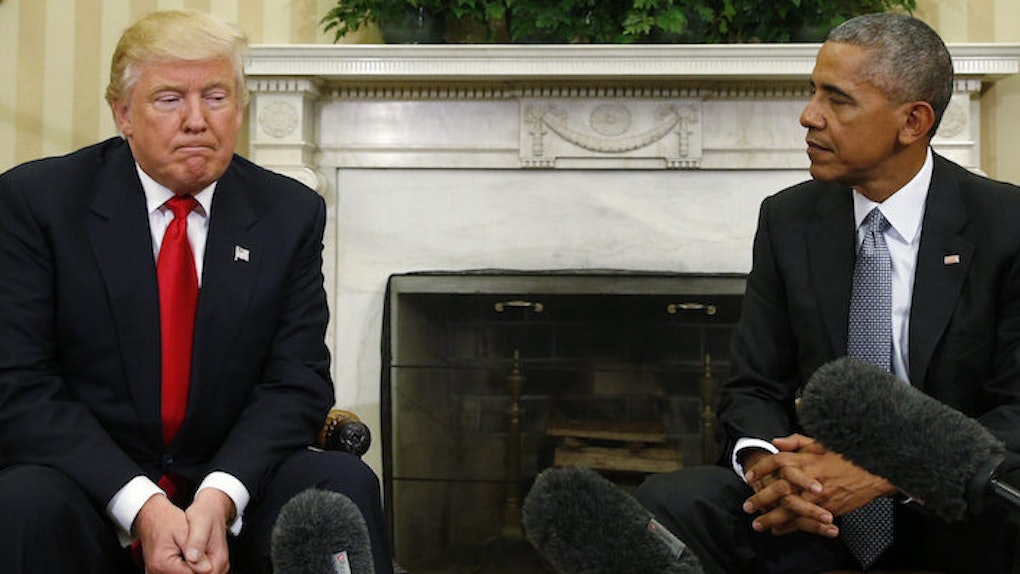 President Obama And Trump Had An Awkward Meeting

President-elect Donald Trump met President Obama at the White House on Thursday, and it looked about as awkward as you might expect.

Trump, who started a conspiracy the president wasn't born in the US and called him the "founder of ISIS," referred to the president as "a very good man" and said he would seek Obama's "counsel" in the future.

Yeah, we're not buying it, dudes.

A picture is worth a thousand words.

If you've ever wondered what it looks like when mortal enemies have to pretend to like each other, now you know.

To both of their credit, they're clearly trying to carry on the tradition of the peaceful transfer of power.

As the president stated,

My number one priority in the next two months is to try to facilitate a transition that ensures our president-elect is successful.

Speaking to Trump, he added,

If you succeed, the country succeeds.

In a way, it's good for them to bury the hatchet and try to bring some civility back to American politics, but it's hard to feel as if this was genuine.

These two have traded blows for years, and the looks on their faces as they shook hands says it all. Trump couldn't even look Obama in the eye.

The look on the president's face says, "I can't fucking believe I'm actually in the same room as this guy."

The video of the meeting is about as awkward as the pictures. They tried to sound cooperative and civil, but it's cringeworthy.

The US is very divided right now. There were protests against Trump's victory across the US on Wednesday night.

And everyone at the White House was clearly devastated and unhappy about Trump winning.

In spite of Obama and Trump's efforts to play nice, it's definitely going to take a lot more time before this country starts to feel normal again.