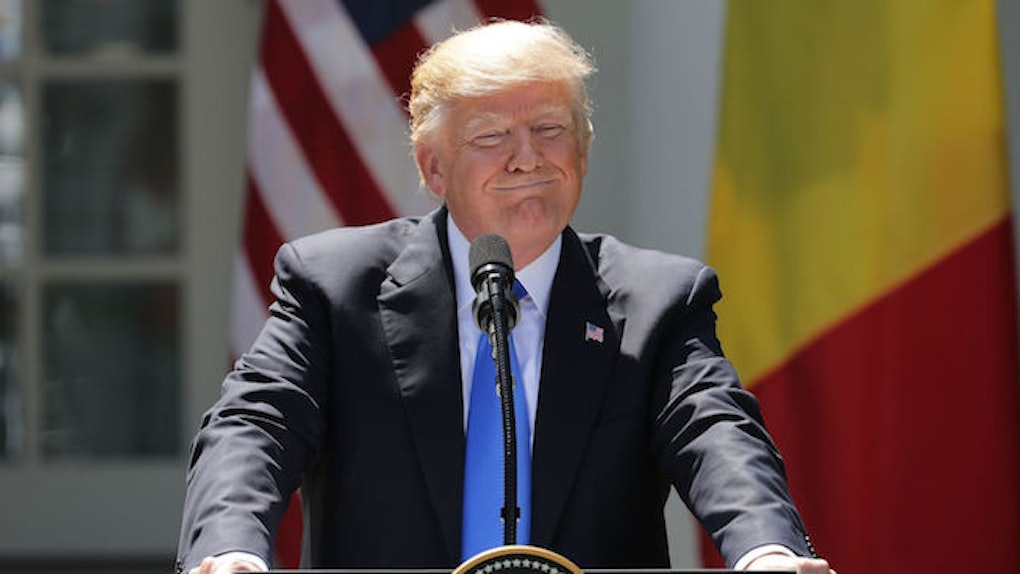 Trump Put Out A Statement For "Men's Health Week"

The Donald Trump White House put out a statement for "Men's Health Week" on Monday, June 12.

Men's Health Week was started by the (heavily male) Congress in 1994. It's celebrated in the week leading up to Father's Day.

In the statement, Trump encourages "all fathers, brothers, and sons to prioritize their health and well-being by learning more about preventative health practices and steps they can take to live longer, healthier lives."

He notes that men have a lower life expectancy than women and that many men suffer from cardiovascular disease.

Trump also takes the time to note that our healthcare system is "failing many Americans."

There are lots of reasons to raise your eyebrows at Trump's "Men's Health Week" statement.

For one, he released a statement on that but not for Pride Month.

For another, when it comes to men's health, Trump does not think exercise is good for a body, contrary to scientific evidence. After college, he pretty much stopped exercising because he "believed the human body was like a battery, with a finite amount of energy, which exercise only depleted," according to the Washington Post.

Then there's the whole question of health care coverage.

In the statement, Trump says that we "must ensure that the market for healthcare works for both men and women."

The Republican party has been badly trying to repeal and replace the Affordable Care Act, aka Obamacare, with their own American Health Care Act (AHCA).

Republicans' current version of that plan would leave 23 million people uninsured by 2026, according to a Congressional Budget Office analysis.

And, of course, there's the whole issue of women's health.

Trump has not exactly been supportive of policies that support women's health, so it's extra enraging to see him highlight men's health at a time when women are literally fighting for their right to receive the care they deserve and need.

Those 23 million uninsured people from the AHCA include women. The AHCA would also allow states to take away protections for pre-existing conditions, which hurts women.

With all these reasons in mind, Twitter saw the statement and immediately let out one big, collective eye-roll.

Of course, all of this is not to say that men's health isn't important.

But coming from Trump, the emphasis isn't appreciated.