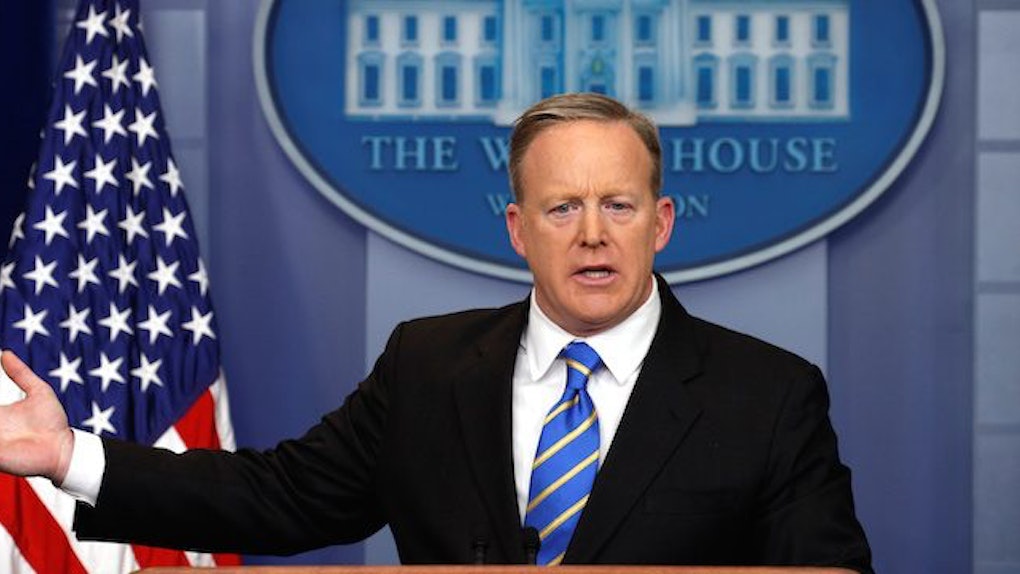 Sean Spicer, Donald Trump's press secretary, is not having a good first week at his new job.

It all started over the weekend, when he went on a ridiculous tirade claiming Trump's inauguration crowd was massive, although it clearly was not.

Then at the beginning of the week, Spicer went on a ridiculous tirade complaining the media was being mean by stating facts, and it was, like, really not cool!

As the public heard more from Spicer, we became more interested in him. And thus, we found out about his five-year feud with Dippin' Dots.

Then it was reported Trump shamed Spicer for poor clothing taste and made him change his suits.

On Thursday, which is the sixth full day of the presidency (although Spicer will tell you it's Day Four), Spicer seemed to cause even more problems for himself thanks to Twitter.

And, no, it's not because of something that Trump tweeted. For once.

On Thursday morning, Spicer tweeted out a jumble of letters and numbers.

This could very easily be explained as a butt tweet or a mistake or whatever.

But many clever tweeters saw something more significant in that keyboard smash of eight characters with both numbers and letters.

For the record, I tried to log in to Spicer's account using that code, and it didn't work. But that was also like 20 minutes after he'd tweeted and by then, perhaps, he'd realized his mistake and changed his password.

If this was, in fact, Spicer's password, it would be an embarrassing mistake for a prime member of the White House staff.

But what would make it more embarrassing? If he'd done it two days in a row.

This makes it even more suspect that it was, indeed, his password.

If Spicer is accidentally tweeting out his Twitter password, it's a horrific show of how well the Trump administration is keeping up cyber security.

Which is ironic, considering, you know.

Both of these tweets, on Wednesday and Thursday, were quickly deleted.

Citations: What we learned at Sean Spicer's first briefing (CNN), DID SEAN SPICER GET A TRUMP-APPROVED MAKEOVER? (Hollywood Reporter)