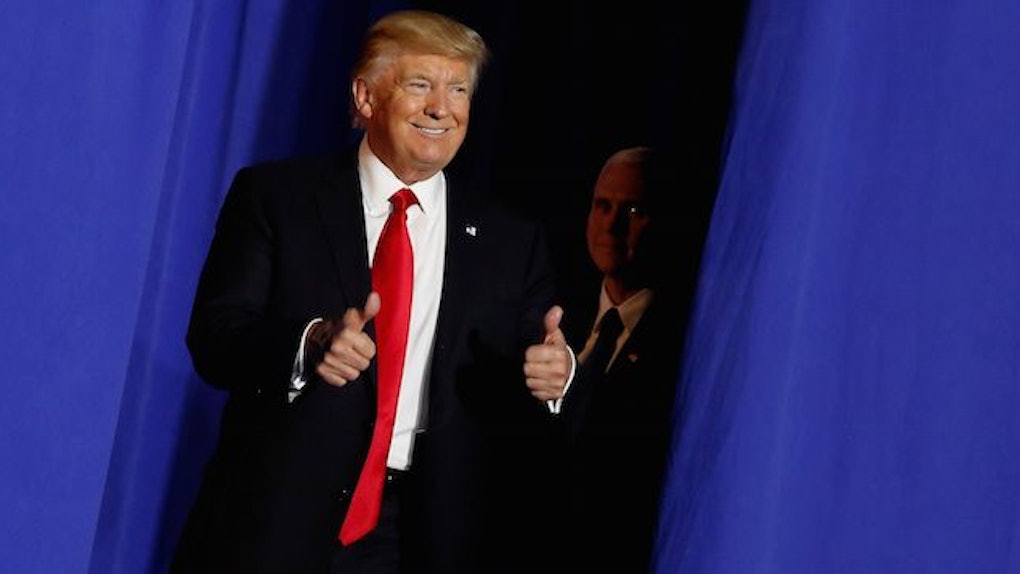 If there was one word or topic that dominated headlines during the US presidential campaign, it was "emails."

We heard about Hillary Clinton's use of a private email server countless times (in addition to a lot of news about leaked emails).

Along the campaign trail, Donald Trump habitually brought this issue up and actively condoned the idea of Clinton going to jail over it.

"Lock her up" was one of the most prevalent chants at Trump rallies.

Well, it seems like America's new president is a giant hypocrite (shocker) because he's still using a private, unsecured phone.

On Tuesday night, Twitter users noticed that Trump's tweets said they were sent "via Twitter for Android."

Subsequently, on Wednesday, the New York Times confirmed that Trump was indeed continuing to use his unsecured Android phone, to the great dismay of his close aides.

Mr. Trump's wife, Melania, went back to New York on Sunday night with their 10-year-old son, Barron, and so Mr. Trump has the television — and his old, unsecured Android phone, to the protests of some of his aides — to keep him company.

Why does this matter?

It's pretty simple: It puts a communication device utilized by the leader of the free world at great risk of being hacked.

Given Trump has already done things like supporting the start of a new nuclear arms race via Twitter, it's not the safest thing in the world for him to be using an unsecured phone.

Not to mention, if Twitter users can look at Trump's tweets and see he's using an unsecured phone, sophisticated hackers and America's enemies can definitely figure it out.

The security of the president's communications is a serious matter that impacts the safety of the country.

Throughout his tenure, President Obama's use of phones was strictly restricted. There were no apps whatsoever on his phones.

I now have an iPhone. But, it is, you know like the phone you give your 2-year-old? Where… they can pretend to press things but nothing actually happens? So my phone has no phone, no camera, no music. All it has is the internet and I can send emails… But my rule throughout my presidency is that, I assume someday, sometime, somebody will read this email. So I don't send any email that at some point [will be] on the front page of the newspapers.

So, it's not likely President Trump is tweeting from a government-issued phone, because he wouldn't be able to.

Consumer phones like Androids are not hard to hack.

As Mike Murphy, a tech reporter for Quartz, notes,

Consumer-grade devices just aren't that secure. There's a reason the government builds specific, hardened devices for the president and other high-ranking officials—they are then able to control and monitor exactly what information comes into and leaves the devices. Consumer phones, with their multiple cameras and microphones, are relatively easy to hack or turn into devices that can spy on their owners. Just imagine what would happen if Trump's insecure Samsung smartphone was on the table during a Joint Chiefs of Staff meeting about the country's security.

In short, this is a matter of national security and President Trump needs to take it seriously.

There's too much at stake and the risk is too high to not take all precautions.