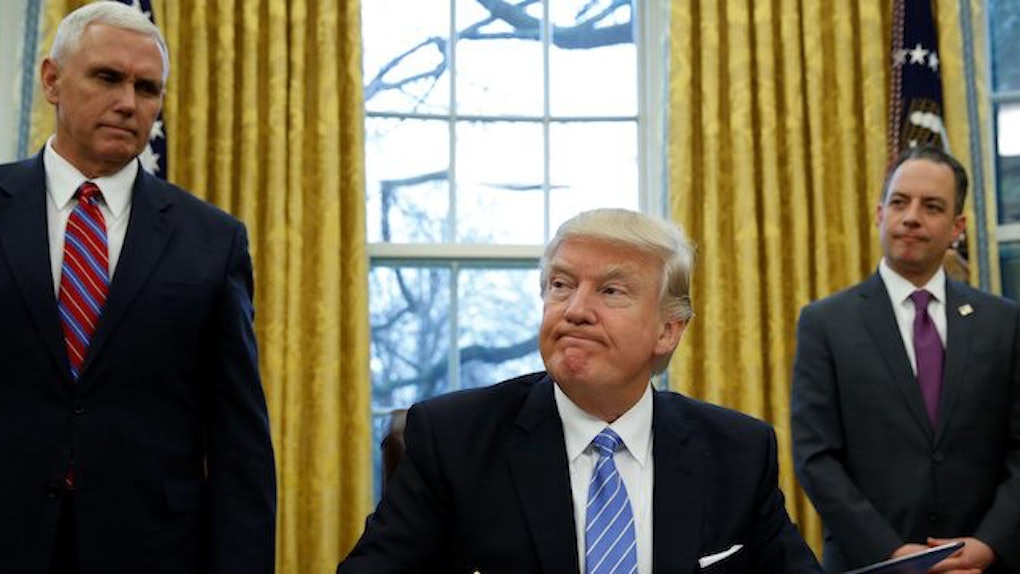 Donald Trump wants you to know he's very proud and not at all embarrassed by the size of his inauguration turnout.

In fact, he wants to celebrate the masses upon masses of deplorables who descended upon Washington, DC last week. So, he got a photo framed that he plans to hang in the White House for all to see.

Trump is so proud of the photo — greatest photo of all time, real winner — that he tweeted it:

There was just one minor issue with the photo of Trump's inauguration that he's so proud of and not-at-all feeling bullied about.

Can you see it?

Specifically, at the date printed on the photo Trump wants to hang in the White House:

And January 21? That was the Women's March, which Trump is apparently feeling a little "SAD!" about, according to his press secretary, Sean Spicer.

So Trump, champion of accuracy and facts, got his own inauguration date wrong and didn't even notice. But a lot of other people did, and noted its "alternative" date.

It really does give you confidence in our president.

This is especially ironic considering that Trump just declared his inauguration day a national holiday.

Regardless of the dictator-like context, you'd think Trump would at least remember the date of his own National Day Of Patriotic Devotion.

But apparently, that was just too much to pay attention to between complaining about people being mean, taking away environmental protections and abortion rights and reiterating complete and utter lies.