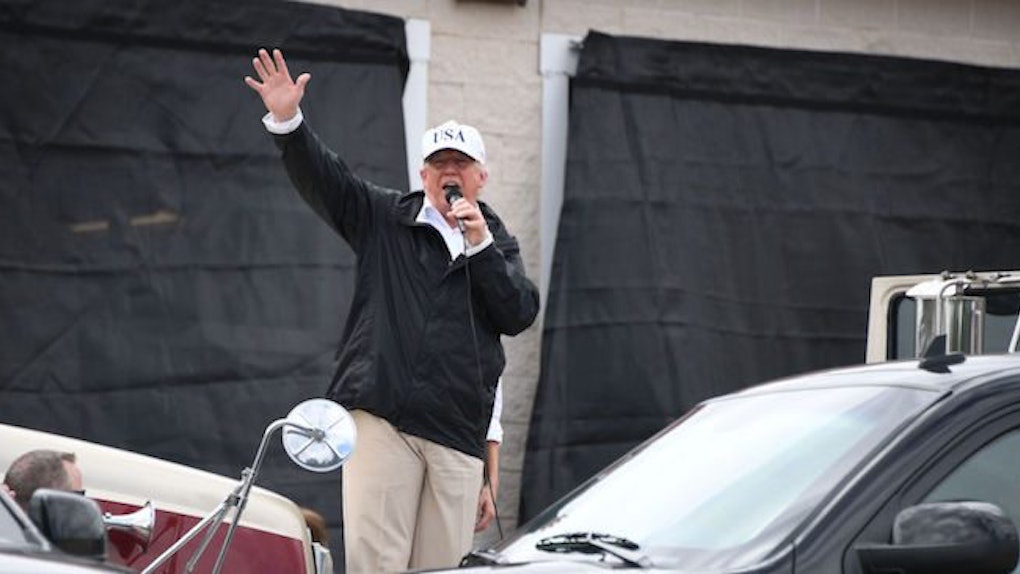 On Tuesday, Aug. 29, President Donald and Melania Trump visited Texas to survey the damage from Hurricane Harvey. This is a presidential tradition of sorts, as the leaders of the country are expected to be on hand when disasters happen to assure people that relief efforts will be made and to comfort victims. But the current president hit a bit of a stumbling block with his Texas visit as it's been made clear that Trump did not meet with Hurricane Harvey victims on his trip.

That's right. After traveling all the way out to Corpus Christi, Trump reportedly failed to actually greet and speak with people who had been hurt by the storm. Instead, Trump attended a meeting with officials, including Texas Governor Greg Abbott and Texas Senators Ted Cruz and John Cornyn, the Washington Post reports. In addition to the meeting, Trump hosted a makeshift rally... where he bragged about the "crowd" and "turnout."

The president is being criticized for failing to actually talk about the victims of the storm, let alone meet with any of them. At least 30 people died in Harvey, according to The New York Times, and an estimated 30,000 are or will be displaced from their homes, according to the Washington Post.

Ari Fleischer, who served as Press Secretary for George W. Bush, slammed Trump for not speaking with empathy for the hurricane victims:

Fleischer was not alone in his criticism.

Hurricanes and natural disasters have been seen as tests for presidents -- from Bush's bungled response to Hurricane Katrina (remember "George Bush doesn't care about black people"?) to former President Barack Obama suspending campaigning in the 2012 election for Hurricane Sandy.

And Trump's public appearances and statements aren't making him look too good.

Between his failure to meet with victims, his rally and comments about crowd size, and his tweets about the storm -- which seemed to be oddly congratulatory about how big it was -- Trump is not making such a presidential appearance amid the very real destruction and loss of life in Texas.

It's not just Trump himself not looking great. Melania Trump is facing criticism for her outfit choices for the hurricane visit. While she looked great boarding Marine One in heels and walking around Texas in her "FLOTUS" baseball cap, she didn't exactly give the appearance of a first lady humbly going to comfort victims in a flood zone.

And unfortunately for the Trumps, these public appearances matter. Of course, what matters more are the actual relief efforts and the real people whose lives have been affected, but in terms of the success of his presidency, this moment matters. How he acts is a signal of who he is and what he feels for those very real people -- which could inform what they, in turn, feel for him.

A president is supposed to be a leader in times of crisis in the United States. So far, Trump's just been leading his own ego.