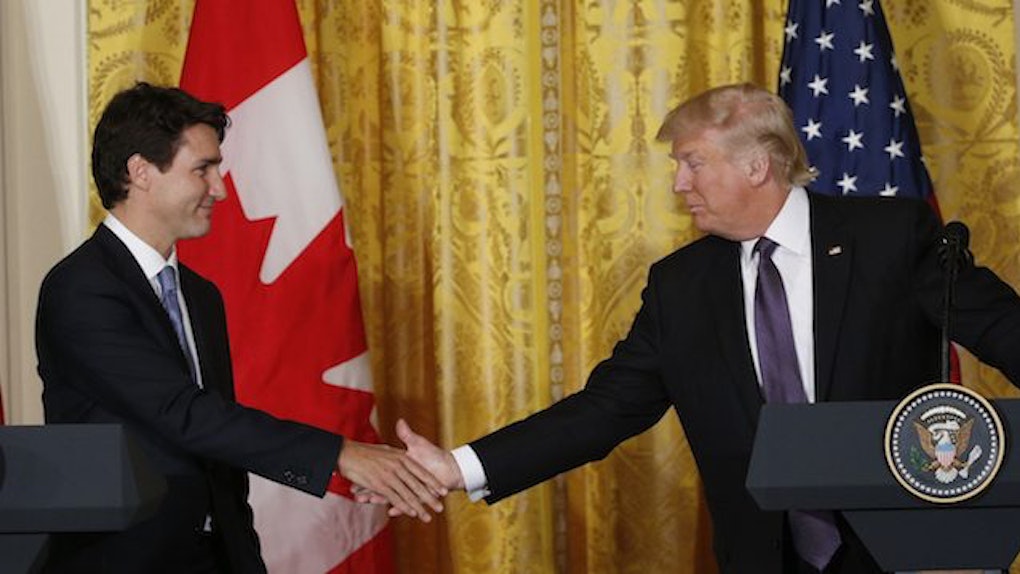 President Donald Trump faced questions about his rejection of Syrian refugees while standing next to Canadian Prime Minister Justin Trudeau.

Trudeau and Trump were asked about their stances on Syrian refugees during a joint press conference in Washington, DC on Monday, February 13.

A reporter asked Trump if he felt that the northern border of the United States was safe given that Trudeau was allowing so many Syrian refugees into the country.

Trump, characteristically, gave a rambling response that did not actually answer the question.

Instead of talking about Syrian refugees, Trump about talked criminals in the United States.

The president said you can "never be totally confident" of a border's safety, but new Secretary for Homeland Security General John Kelly is doing a "great job" getting criminals out of the country.

Trump says "criminals" with "a tremendous track record of abuse and problems" are getting taken out of the United States.

Presumably he's talking about immigrants (and, likely, illegal immigrants) with criminal records who come to the country — that was a talking point of us during the election — but as he never actually clarified that, I'm not totally sure.

And, no, I'm not sure what this has to do with Syrian refugees, either.

Then Trump makes his pivot to winning the election.

He says (and, no, there's no further transition from what I'm writing here, he just jumps into this),

That's what I said I would do. I'm just doing what I said I would do when we won by a very, very large electoral college vote, and I knew that was going to happen, I knew this is what people were wanting — that wasn't the only reason, that wasn't my only thing that we did so well on — but that was something that was very important, and I said, 'We will get the criminals out, the drug lords, the gang members,' we're getting them out. General Kelly, who's sitting right here is doing a fantastic job, and I said at the beginning, 'We are going to get the bad ones, the really bad ones, we're getting them out,' and that's exactly what we're doing.

Trudeau was later asked what he thought of Trump's refugee ban.

The Canadian prime minister said although the United States and Canada have had a strong relationship for a long time, "there have been times where we have differed in our approaches."

The last thing Canadians expect is for me to come down and lecture another country on how they choose to govern themselves. My role, our responsibility, is to continue to govern in such a way that reflects Canadians' approach and be a positive example in the world.

Meanwhile, immigrants living in the United States have been  fleeing across the northern border to Canada, seeking refugee status as they fear the state of their lives under Trump.