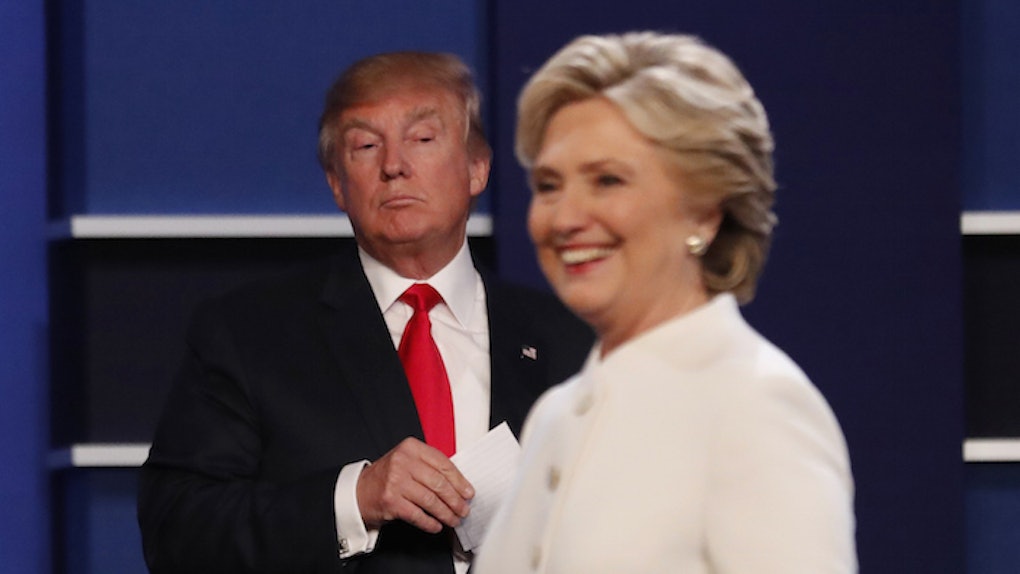 Donald Trump knows he's down in the polls.  So, his campaign's devised a questionable new strategy.

Bloomberg took a look at the campaign's digital operations center out in San Antonio, Texas, in an article published on Thursday.

We have three major voter suppression operations under way.

Those "three major voter suppression operations" include convincing "idealistic white liberals, young women and African Americans" – according to Bloomberg – to not vote. It just so happens these are the three groups the Hillary Clinton campaign has been wooing.

Voter suppression is a serious offense: It means you keep people from voting. This has been done largely through laws like requiring photo IDs and banning people who've had felonies from voting.

Another instance is repealing the 19th Amendment to keep women from voting (and leading Clinton to victory, as polls predict women would).

We also saw this in American history with the Jim Crow laws, which kept black Americans from voting after the Civil War thanks to requirements like literacy tests.

In this case from the Trump campaign, it seems like the senior official made an unfortunate choice of words.

The Trump campaign's operations are not technically "suppression" so much as "discouragement."

The campaign has a different strategy for targeting each demographic. It mostly consists of telling them things they think will make them not want to vote for Clinton.

Trump is bringing up Clinton's flip-flop on the Trans-Pacific Partnership and the WikiLeaks emails to convince Bernie Bros (ie, idealistic white liberals) from voting for her.

There's just one issue with that: Bernie Sanders is campaigning for Clinton.

That bill is credited for a harmful rise in mass incarceration, especially among minorities.

In that speech, Clinton was talking about gangs. She said there are "the kinds of kids that are called superpredators." Black Lives Matter activists brought this up with Clinton in February this year.

She has since apologized, saying,

Looking back, I shouldn't have used those words, and I wouldn't use them today.

That's why Trump has been parading around the women who say Bill Clinton assaulted them, and that Clinton intimidated them to stay silent.

This method, of course, backfired pretty hard on Trump. We're now up to 11 women who have come forward to say Trump himself assaulted them.

Meanwhile, these methods are unfounded. There's no evidence any of them will work at all.

As the Bloomberg article notes, this could end up having the opposite result for the Trump campaign.

This is not to mention the fact that many voters are not idiots. Trump bringing up Bill Clinton's accusers is easily seen as Trump using women as props. As the Millennial generation cares about "authenticity," this matters.

Trump bringing up Clinton's "superpredators" remark is difficult persuasion against the Mothers of the Movement's support for Clinton, as well as Trump's history of housing discrimination.

And again, Trump going for Bernie Bros is hard to hold up to Bernie literally campaigning for Clinton.

But I guess we'll see how well this turns out for Trump on November 8.