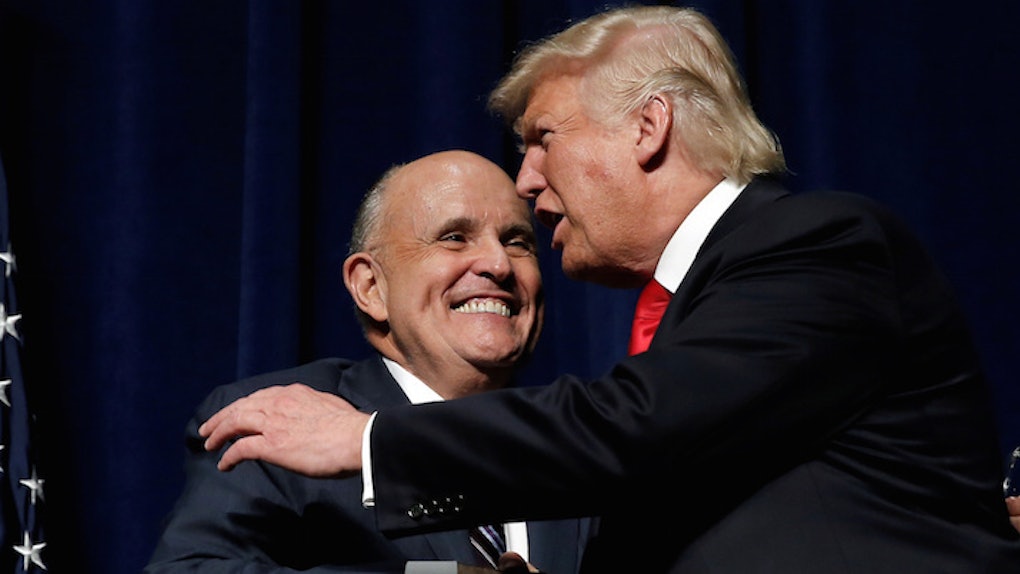 We Asked Rudy Giuliani If Donald Trump Is A Feminist

Donald Trump is "absolutely" a feminist, according to former Mayor of New York Rudy Giuliani.

Giuliani has been supporting Trump in the presidential election.

He gave a fiery (and terrifying) speech during the Republican National Convention in Cleveland in July and has been standing by Trump's statements on city crime and stop-and-frisk policies.

Giuliani was playing his role as a surrogate in the spin room after the first presidential debate on Monday night.

After the debate ends, surrogates -- campaigners who represent and support a candidate -- gather in the spin room to answer questions about the candidate.

The former mayor was spinning around saying that the debate showed him that Hillary Clinton is a fake feminist.

His argument was that,

Giuliani kept repeating this argument. So I had to ask:

Is Donald Trump a feminist, then?

Giuliani responded that Trump is a feminist.

To which another reporter interjected,

Giuliani said that he was "absolutely sure" that Trump is a feminist, adding that he's known him for 28 years and that women in Trump's organization are treated fairly.

This response was in spite of Trump's noted history of sexist comments.

In addition, Trump's parental leave policy is only for mothers, because, as he's said, he believes only mothers should be taking care of children.

Giuliani went on to say that Trump was too "reserved" and "gentlemanly" to say what Giuliani would've said had he been on the debate stage.

Of course we had to know: Rudy, what would you have said?

I sure would've talked about what she did to Monica Lewinsky.

Giuliani went on to blame Clinton for her husband's indiscretions, saying,

After being married to Bill Clinton for 20 years, if you didn't know the moment Monica Lewinsky said that Bill Clinton violated her that she was telling the truth, then you're too stupid to be president.

So there you have it, folks: Donald Trump, who has five children from three marriages, is a champion of marital fidelity and a feminist icon.