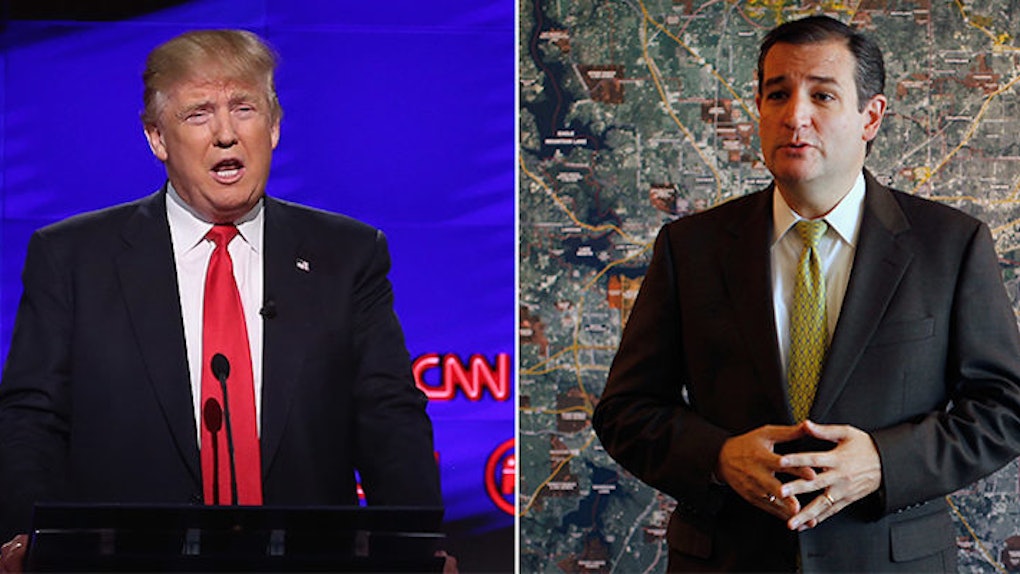 At this point, Donald Trump has managed to piss off pretty much the entire world.

In the past few days alone, R&B singer John Legend and New York City Mayor Bill de Blasio called Trump "racist," the creator of "Humans of New York" condemned him in an open letter and the hacker group Anonymous declared "total war" on him.

The unfortunate reality, however, is his campaign for the presidency has significant momentum. Trump is the GOP frontrunner and is dominating his opponents.

While many laughed him off when he first announced he's running, the prospect of Trump becoming the Republican nominee is no longer so far-fetched. Accordingly, no matter what your opinion on Trump might be, we have to take him seriously.

But amid all of the hoopla and uproar surrounding Trump's campaign, we can't forget there are still three other candidates and anything could happen in the future.

While we can all agree Trump is a horrendous individual, we shouldn't be fooled into thinking his Republican opponents are any better.

This is particularly true when it comes to Senator Ted Cruz, whose policy proposals and rhetoric are just as bad as Trump's, if not worse.

Trump might be leading the Republican field, but Cruz isn't trailing that far behind. As The Guardian recently noted,

The Texas senator is running second to Trump in the race for the Republican nomination: seven states to Trump’s 15, roughly 29 percent of the votes to 35 percent, and about 100 delegates behind the self-proclaimed billionaire in the race to 1,237, which would give either man the nomination outright. Cruz is the underdog but, in this most unpredictable of election years, he still has a fighting chance... Cruz is currently the only candidate besides Trump who has a mathematical possibility of obtaining a majority of delegates on the first ballot at July’s Republican convention.

The prospect of Trump becoming president is terrifying. No reasonable person wants a man who desires to deport over 11 million people, ban Muslim immigration and build a massive wall along the US-Mexico border to ascend to the White House.

Trump is a xenophobic demagogue who's campaign has already managed to damage America's reputation. Between encouraging violence at his rallies, condoning Islamophobia, scapegoating immigrants and degrading women, the man is absent of any redeemable qualities.

But the fact of the matter is if Trump actually becomes president, much of what he's proposing would almost certainly never come to pass because it's completely unviable.

Mexico is not going to pay for his giant wall (as he's contended) and deporting over 11 million undocumented immigrants would wreak havoc on the US economy and destroy communities. Not to mention, establishment Republicans in Congress despise him, and would likely be as obstinate as they've been with President Obama. There's also the possibility of impeachment.

If he did become president, Trump would have a lot of trouble accomplishing, well, anything.

Trump just doesn't understand the system and he has revealed his ignorance on policy specifics time and again, especially during Republican presidential debates.

As Lee Drutman of Vox put it,

Most likely [Trump] would make an ineffective and terrible president, because he has no real understanding of what being president involves. And in all probability, the damage he can do is limited by the basic constitutional and administrative designs of the US government, which restrict the powers of the executive... Trump's policy promises run the gamut from unrealistic distortion to infeasible bluster.

This is why Senator Ted Cruz is a lot more dangerous than Trump in many ways.

Cruz is a shrewd political operator with an intimate understanding of how Washington works.

He's not afraid to manipulate the system to his favor, even if it drives down his popularity among both Democrats and Republicans. Moreover, he has a background in law (former Solicitor General for Texas) and is an expert on the Constitution (even though his interpretation of the document is questionable).

Cruz might have dubious perspectives, but he's very intelligent -- unlike Mr. Trump -- and that makes him more threatening.

His viewpoints are inconsistent with American values, and his policy proposals are fundamentally regressive.

Cruz is a hyper-religious conservative who's pro-war, anti-abortion (but pro-death penalty), anti-gay marriage, fervently pro-gun, condones Islamophobia (calls for banning all refugees except Christians), anti-Obamacare, denies the scientific consensus on climate change and opposes the Iran deal (he's not big on diplomacy).

In spite of being the son of a Cuban immigrant, Cruz's stance on immigration completely lacks compassion -- he's a proponent of deporting undocumented immigrants and, like Trump, wants to build a wall along the US-Mexico border. As President Obama recently stated,

This is not a man we want as president.

Trump is bad, but Cruz is definitely not the lesser evil.