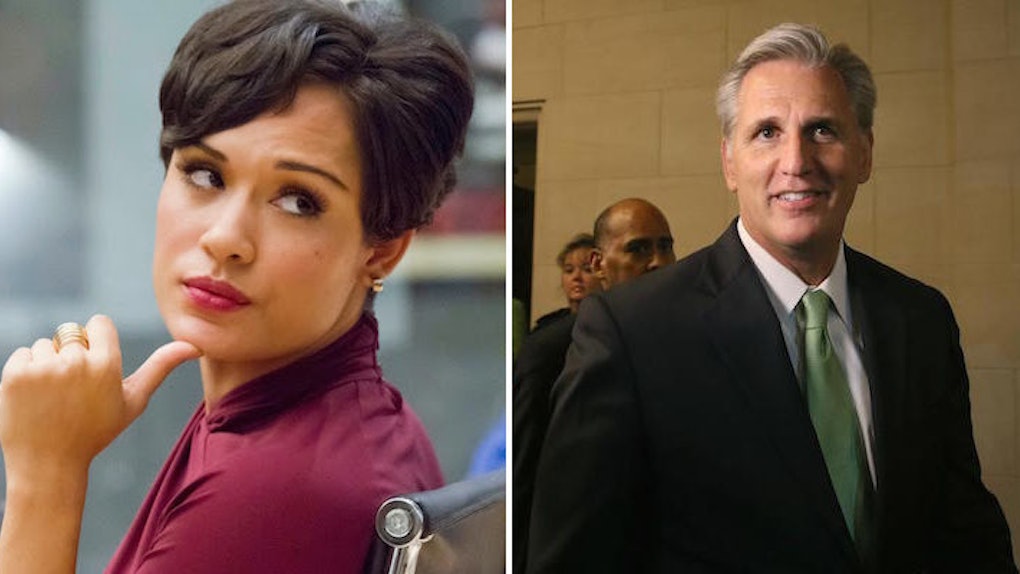 The Speaker Of The House Race Just Turned Into 'Empire'

Republicans in the House of Representatives were supposed to vote for their speaker of the House candidate today, but instead, favorite Kevin McCarthy announced he was dropping out of the race.

This announcement came as a huge shock, as McCarthy had just reiterated this morning he was running and looking for support.

Current speaker John Boehner surprised the House two weeks ago by announcing he would be resigning. There's been general turmoil among the GOP as they teeter between more and less conservative beliefs.

The Republicans were supposed to pick their nominee on Thursday, going into an official vote at the end of October. The vote has been postponed.

The speaker gets to push forward topics to be heard in the House and elects the timing for legislative discussions.

In other words, the speaker of the House is kind of like the A&R person in a record company -- the person in charge of artists and repertoire who scouts new artists to be heard and potentially represented by the company.

McCarthy, a Republican from California, was basically Anika Calhoun from “Empire.”

He serves as the majority leader for the House Republicans and is considered Boehner's right-hand man. Most political analysts had figured it was a given he'd take over as speaker.

Like Anika, though, McCarthy took some major stumbles. McCarthy insinuated on Fox News that the special committee to investigate the 2012 Benghazi attacks was put together to hurt Hillary Clinton's presidential campaign. He apologized for the comments on Wednesday.

But for politicians, saying that was like secretly working for Billy Baretti. Republicans used it as a reason to turn against McCarthy and Clinton is using it as fuel for her campaign.

Meanwhile, there are rumors going around conservative media that McCarthy was having an affair with another representative, which sounds very Anika/Baretti.

As Anika got kicked out of Lucious' mansion, McCarthy walked himself out of the race.

(I'll take this moment to note all of these comparisons are about the speaker campaign itself, not people's beliefs -- we're talking about a bunch of old Republican white dudes, after all.)

So who's left to take over the House's A&R?

Like Cookie Lyon, Jason Chaffetz from Utah, leader of the House Oversight and Government Reform Committee (you know, those guys who put on the Planned Parenthood theatrics last week), has been using the chaos among the GOP to his advantage.

As the New York Times wrote:

Mr. Chaffetz has a long history of taking advantage of opportunities, and little compunction about challenging a member of his own party.

When the race for speaker started, Chaffetz jumped up to throw his hat in the ring, just like Cookie telling Lucious she'd be much better at A&R than “Boo Boo Kitty” (and that Kid FoFo's lyrics suck).

Anyone who underestimates his ability does so at their own peril.

But Chaffetz isn't the only one going for the job.

Daniel Webster from Florida is also pushing for the job, though -- at least before McCarthy dropped out -- he didn't have much of a shot of winning at all.

Webster said he wants to be speaker to change Congress for the lower-profile members, like himself, who are basically at the whim of higher members.

In that, Webster is similar to Becky, whom Jamal promoted to A&R. While in a smaller role as Lucious' assistant, Becky continually demanded more responsibility to match her ability.

Like Jamal backing Becky, the conservative House Freedom Caucus backed Webster on Wednesday. While it may not have enough votes to get Webster the speaker position, the caucus has enough to derail the race.

Some are saying this may be the reason McCarthy dropped out on Thursday, thinking it was going to be too much of a fight.

There's still one person who might be able to garner a strong amount of votes: Paul Ryan of Wisconsin. Republicans have been continually asking Ryan to run and he has continually said "no thanks."

Ryan has a strong likability factor from various sides of the fractured GOP, and many contend he could be a unifying presence for them.

But, as I'm sure Porsha would, Ryan has all but laughed in the face of those who asked him to run for speaker, reiterating again on Thursday that he would not.

Being speaker of the House these days is a fraught, thankless job. Porsha's smart enough to avoid accepting positions for personal gain that would hurt her in the long term -- like Anika's offer for higher pay if she spied on Cookie -- and so, apparently, is Ryan.