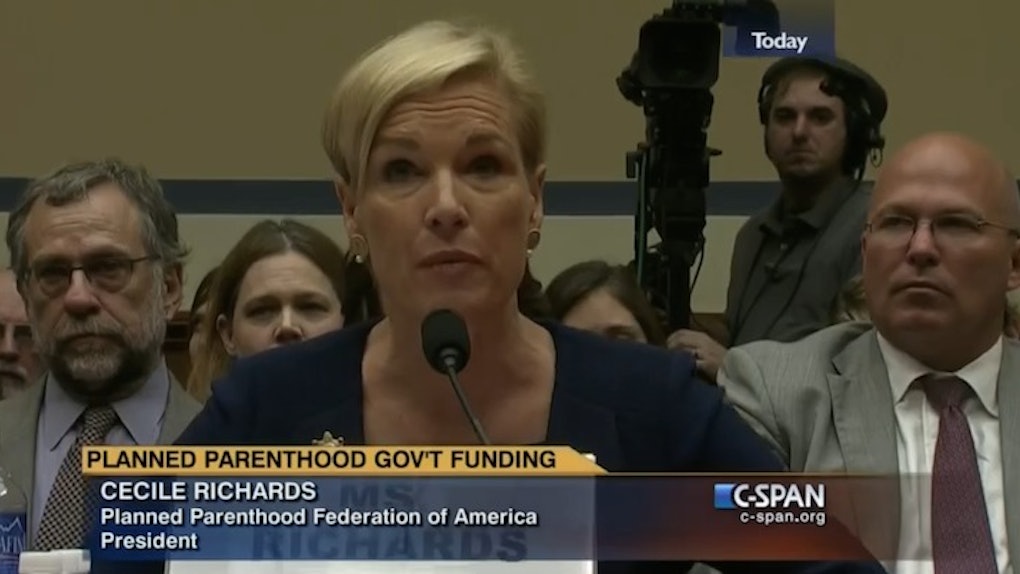 The hearing was held after controversial videos were released by an anti-abortion group purported to show Planned Parenthood selling fetal tissue.

The GOP has been threatening to take away federal funding from Planned Parenthood.

Several themes emerged in the hearing, some of which are based, frankly, on factual inaccuracy and a lack of understanding of women’s healthcare.

These are the five major facts ignored in the Planned Parenthood Congressional hearing:

Abortion is legal in the United States. Thanks to 1973’s Roe vs. Wade, states are not allowed to ban abortion.

Do you understand how some of us may, at a base level, disagree with you on the origin of life?

In response, Rep. Elijah Cummings from Maryland, top Democrat on the committee, put it best at the end of the hearing:

There’s one thing that we seem to be sort of glossing over, and sort of moving around: It is the law. I mean, it’s the law. You may not like the law, but it’s the law. [Planned Parenthood is] doing what is within the bounds of the law.

Say it with me now: Abortion is legal in the United States.

2. Federal funds do not pay for abortions.

Ostensibly, Republicans are fighting to defund Planned Parenthood to stop abortions. But federal funding does not pay for abortions.

Federal money only goes to abortions in the case of incest, rape or danger to the mother. Otherwise, private donors, foundations and personal fees pay for abortions.

Fetal tissue research is at the center of the current debates, thanks to the videos.

Like abortion, fetal tissue research is legal in the United States.

Tissue is collected when a woman getting an abortion gives explicit approval. Fetal tissue has been used to find treatments for HIV, Parkinson’s, Alzheimer’s and Down syndrome.

Vaccines for polio, measles, mumps, rabies and other diseases have also been made thanks to fetal tissue research.

I think it’s crazy we’re having this hearing based on heavily-edited videos and misleading videos that actually showed the exact opposite of what was happening. And what was happening was that Planned Parenthood was following the law. I think it’s also crazy that we’re here when we have fetal tissue research that is not only entirely legal, but has bipartisan support. And I think it’s insane that in my district now, because of these misleading videos, women have, in some cases, had to go through two sets of bomb-proof doors just to access healthcare.

4. What happens at a gynecologist appointment.

If I learned one thing from this Congressional hearing, it’s men have no idea what happens when a woman goes to the gyno.

Republicans kept bringing up a stat that Planned Parenthood has been performing fewer Pap smears in recent years. There’s a medical reason for this.

The recommendations now say women ages 21-65 should only get them once every three years.

Rep. Brenda Lawrence, Democrat from Michigan, takes it away:

Every woman here knows you have a primary doctor and that doctor examines you, and if there is a lump, you are referred to a specialist. So I wish those who sit here to ask those questions would actually have the sensitivity to understand what a woman goes through with her healthcare.

Republicans asked why Planned Parenthood was necessary when there are so many other healthcare providers and clinics.

Planned Parenthood clinics comprise only 10 percent of publicly-funded contraceptive clinics, but see 36 percent of patients who use the government birth control programs.

The Congressional Budget Office itself reported without federal funding for Planned Parenthood, between 130,000 to 630,000 women would lose access to healthcare.

Moreover, many Democrats testified that their constituents choose Planned Parenthood over public clinics because of the higher-quality care. Rep. Mark DeSaulnier of California said:

In California, the counties provide healthcare for disadvantaged communities, low income communities. It was always my experience that the clients chose Planned Parenthood, when they had the opportunity, because they wanted to -- whether they were a private payer or not.

Other Democrats testified about what happened in their states without Planned Parenthood.

Del. Stacey Plaskett from the Virgin Islands, which do not have a Planned Parenthood, said she wants one there to help residents.

Rep. Lujan Grisham of New Mexico explained since 2008, public funding for health has gone down. Also since then, New Mexico has become the state with the highest teen pregnancy rate:

Ultimately, it’s ridiculous in 2015 we still have to fight for women’s right to access legal health services, and I have no idea how Richards sat through that without ripping her hair out and screaming.

Rep. Bonnie Watson Coleman of New Jersey made me proud of my home state, saying:

We’ve got so much good work to do but instead, what do we do? We harp on a woman’s right to make choices that are hers to make.

You can watch the entire hearing, if you have the stomach for it, here.