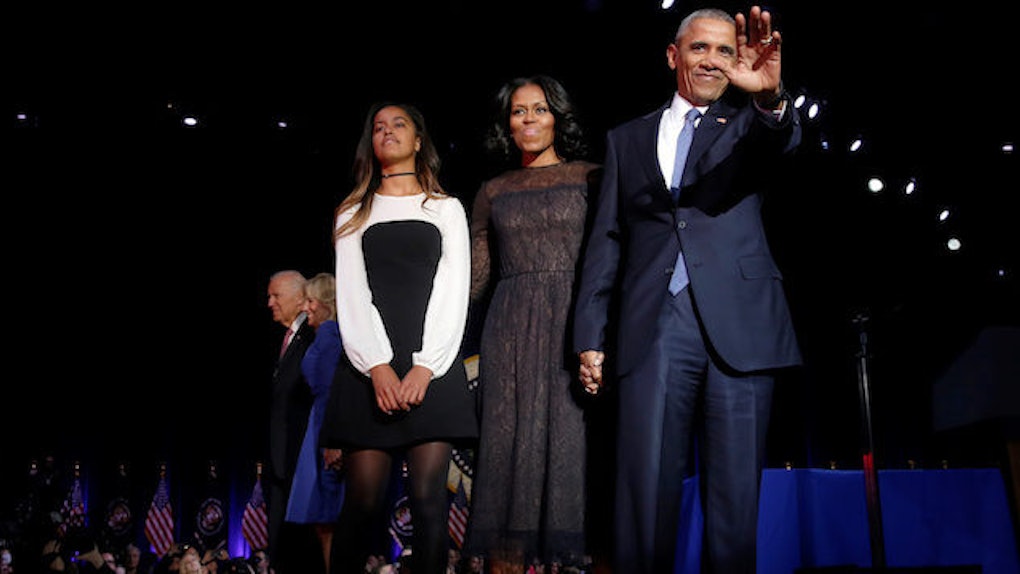 When Barack Obama took office all those years ago, Malia and Sasha were just tiny humans.

Now they're all grown up and dealing with the same teenage nonsense me and you once did.

In fact, Sasha Obama had to take care of some adolescent business last night, which is why she wasn't in Chicago supporting her dad's farewell speech.

Instead, the 15-year-old was at home in Washington D.C. studying for a school test she has today.

Now that's commitment. I mean, if anyone in that class has a valid excuse for skipping a test, it would be, "Sorry, my dad ended his eight years of presidency last night and I had to be at the event."

She missed quite a performance from Barack.

He showered America and his family with compliments while wiping away tears from his eyes. It was emotional and I may have wept slightly as well.

Speaking of his daughters, he said,

Malia and Sasha, under the strangest of circumstances, you have become two amazing young women, smart and beautiful, but more importantly, kind and thoughtful and full of passion. You wore the burden of years in the spotlight so easily. Of all that I've done in my life, I'm most proud to be your dad.

Malia was so touched by his words she appeared to be fighting back tears.

Barack then moved on to his wife Michelle -- the FLOTUS we all know and love, who shall forever remain America's number one woman in my heart. He remarked,

You made the White House a place that belongs to everybody. And a new generation sets its sights higher because it has you as a role model. You've made me proud, and you've made the country proud.

His speech was so inspirational, the crowd started chanting, "Four more years!"

Please don't go, I can change, I promise.