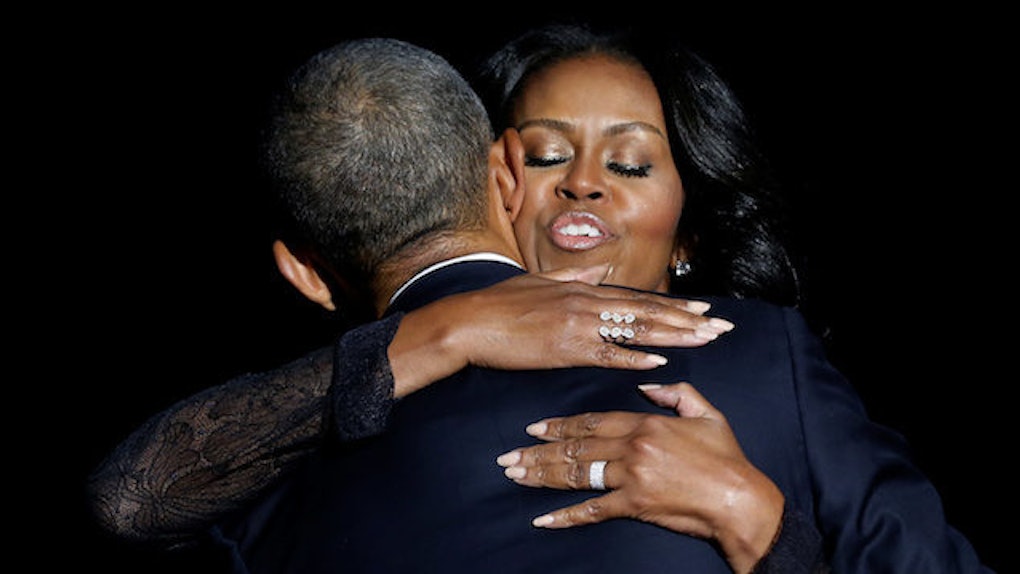 Barack Obama's presidency may be over, but his love for Michelle shall NEVER WANE!

The FLOTUS posted a sweet Instagram after her husband gave his farewell speech last night.

Things were already super emotional, but Michelle just pushed the world over the edge with a throwback photo of the family when the Obama administration began (look how young they all are, btw -- their kids are... kids).

So proud of POTUS and all that we've accomplished together. What an incredible journey filled with remarkable people. I love you Barack. -mo‎‎

Then releasing his emotions all over the place like a big man baby:

We love you, Obama.

He signed off eight years as president with an inspirational speech and chants of "four more years."

The president returned to his original election campaign rhetoric and said,

Change only happens when ordinary people get involved, get engaged and come together to demand it... You were the change. You answered people's hopes. And because of you, by almost every measure, America is a better, stronger place than it was when we started.

Obama did not use his speech to speak against Donald Trump, which must have been pretty hard.

The president-elect's going to have a turbulent introduction to The White House as he tries to find a way to make that explosive dossier disappear.

The 35-page document claims Russia has some serious dirt on Trump both financially and personally.

One of the outrageous allegations includes Trump hiring prostitutes and getting them to perform a "golden showers" show on the same Moscow hotel bed where Barack and Michelle Obama once stayed.

The dossier was allegedly compiled by a British intelligence agent and has been circulating around the intelligence and government communities for weeks -- landing on the desks of Obama and Trump last week.

It is, however, unverified.

The whole thing was published last night, but somehow didn't cast too much of a shadow over Obama's farewell speech.