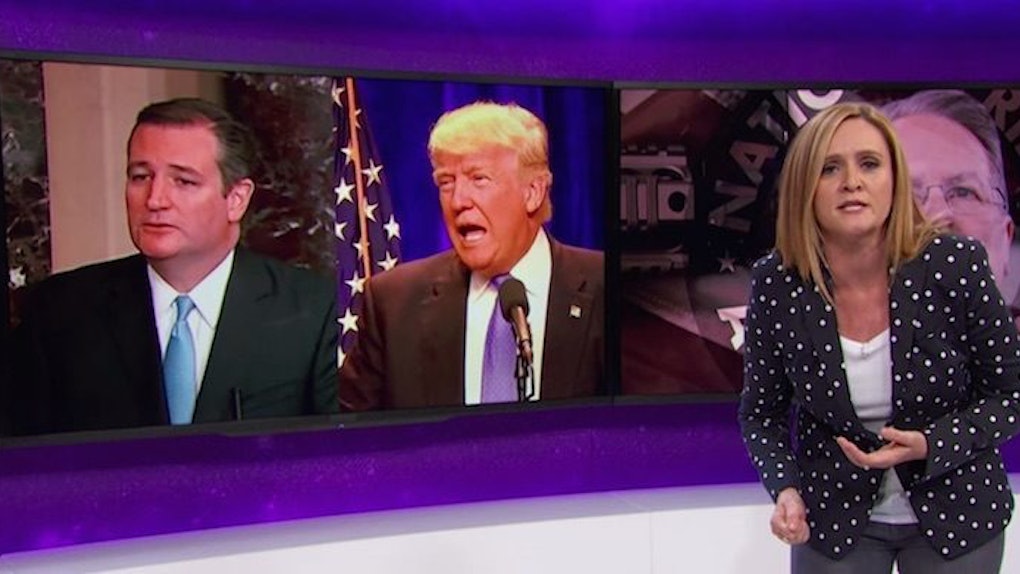 Why Samantha Bee Is The One Voice America Needs Right Now

For years, Jon Stewart and Stephen Colbert were a collective light in the darkness that is America's political system. They helped us make sense of America's dysfunctional government through laughter.

But then they left us. Well, sort of.

They're not dead or completely out of the spotlight, but they definitely aren't a consistent part of the political conversation anymore.

Over the course of the past year or so, Jon Stewart retired from "The Daily Show," and Colbert left the "Colbert Report" to host "The Late Show."

Stewart has occasionally popped up and offered commentary on this insane election cycle, and Colbert sometimes touches on it during his show, but it's just not the same.

Who is America's voice of reason during one of the most ridiculous elections in recent memory? Who can we turn to when we're fed up with the mainstream media's penchant for sensationalism and utter lack of integrity?

Fear not, my friends. There is still hope.

Trevor Noah might not be the replacement everyone hoped for on "The Daily Show," but he's coming into his stride and has given us some pretty powerful segments in his first year. The guy had some enormous shoes to fill, and he's doing a lot better than many give him credit for.

Meanwhile, John Oliver continues to offer an incredible blend of comedy and investigative reporting on "This Week Tonight." His complete annihilation of Donald Trump's campaign (and overall existence) was arguably one of the best television segments of the year.

But one person who is really starting to emerge as one of the most forceful (and hilarious) social commentators during an extremely contentious era in the US is none other than Samantha Bee.

If you're not already watching her show, "Full Frontal," do yourself a favor and check it out immediately.

Donald Trump claims to "tell it like it is," but he doesn't hold a candle to Samantha Bee.

Her cutting analysis of timely issues will leave you laughing your ass off while forcing you to think critically about complex issues.

Moreover, it's about damn time a woman got the chance to host a politically themed comedy show (or any kind of show, for that matter). She's proof this was long overdue.

From her response to the misogynistic ignoramuses who were angry about the Harriet Tubman $20 bill change, to her commentary on gun violence in America following the Orlando shooting, Bee always delivers.

On Monday, she was in excellent form once again while discussing Congress's consistent aversion to doing anything about gun violence in the wake of mass shootings.

She ripped into the GOP for being completely beholden to the NRA.

So if you need a good laugh or are looking for someone to help you comprehend what the hell is going on in this country right now, I'd highly recommend you start watching "Full Frontal." You will not be disappointed.