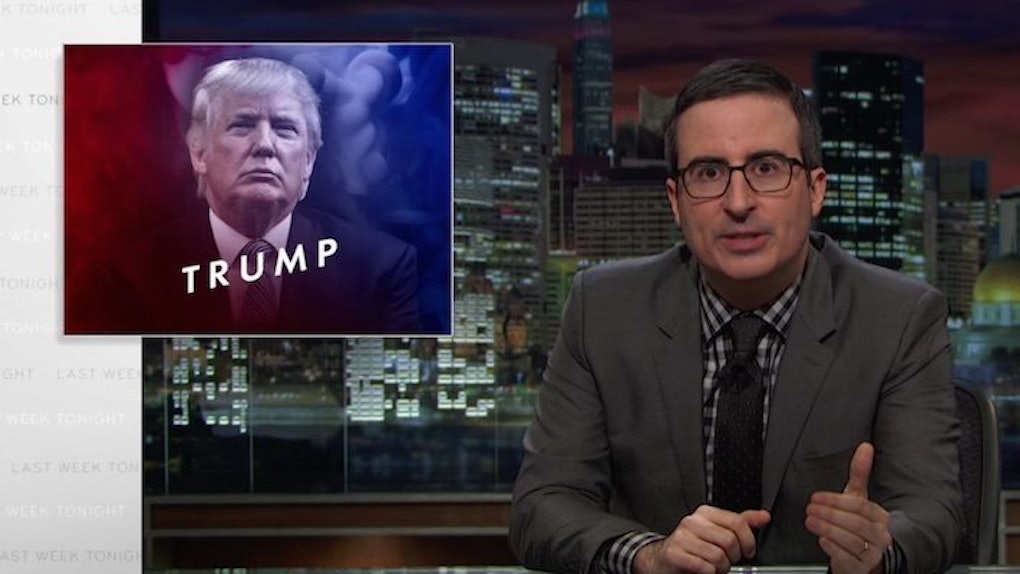 Donald Trump is America's back mole. It may've seemed harmless a year ago, now that it's gotten frighteningly bigger, it is no longer wise to ignore it.

Oliver said he understands why Trump might be appealing to people because there's a small (but unflattering) part of all of us that enjoys watching him make the political establishment squirm.

But when you really start taking a closer look at Trump, Oliver stated, you see what an empty yet dangerous candidate he really is.

A lot of people like Trump because he purportedly "tells it like it is," but as Oliver notes, the website PolitiFact (a Pulitzer Prize-winning fact-checker) checked 77 of Trump's statements and rated 76 percent of them false. In other words, Trump is completely full of sh*t.

Oliver went on to dismantle Trump's claims about how he's financing his campaign and highlighted how ridiculous it is he claims to be "tough," given he flips out anytime someone says something negative about him and threatens to sue them (but doesn't follow through).

Trump is easily the most sensitive presidential candidate in recent memory. And if you can't face criticism without throwing a temper tantrum like a child whose parent won't buy him or her candy, you aren't suited to be president.

Not only did he get a multi-million dollar inheritance from his father, but he's also lost a huge amount.

Still, if all of this is true, why is Trump currently the Republican frontrunner, and why has he been so dominate throughout this race?

Oliver broke it down, and explained why it's so disconcerting,

The problem is, even when you can demonstrably prove Trump to be wrong, it somehow never seems to matter. And that may be because he has spent decades turning his own name into a brand synonymous with success and quality, and he's made himself the mascot of that brand. But if he's actually going to be the Republican nominee, it's time to stop thinking of the mascot and start thinking of the man, because a candidate for president needs a coherent set of policies... Trump's opinions have been wildly inconsistent. He's been pro-choice and pro-life, for and against assault weapon bans, in favor of both bringing in Syrian refugees and deporting them out of the country... That inconsistency can be troubling.

What's more, over the weekend, Trump was even unwilling to unequivocally condemn David Duke -- a former KKK leader who recently endorsed him.

During an interview with CNN, Trump claimed he didn't "know anything" about David Duke, despite ample evidence to the contrary.

Touching on this subject, Oliver ripped Trump to shreds,

You definitely know who [Duke] is, partly because you called him a 'bigot' and a 'racist' in the past. But that's not even the f*cking point. The point is, with an answer like that, you are either racist or you are pretending to be and at some point there is no difference there. And sure, he disavowed David Duke later in the day. But the scary thing is, we have no way of knowing which of his inconsistent views he will hold in office.

As a nation, do we really want to take a gamble on an individual who flip-flops on whether to condemn a man associated with one of the most infamous hate groups in US history?

Donald Trump might be entertaining, and his name might be associated with success, but as it turns out, "Trump" might not even be his family's real name. There's evidence his ancestral name is actually "Drumpf," which an ancestor changed at some point in the past.

Simply put, Trump's brand, much like his campaign, has been carefully manicured to drastically obscure the truth, and we should not be fooled.

As Oliver put it,

'Drumpf' is much more reflective of who he actually is. If you are thinking of voting for Donald Trump, the charismatic guy promising to make America great again, stop and take a moment to imagine how you would feel if you just met a guy named 'Donald Drumpf': a litigious serial liar, with a string of broken business ventures and the support of a former Klan leader, who he can't decide whether or not to condemn. Would you think he would make a good president, or is the spell now somewhat broken?

It's a fair question, and it's why Oliver is asking America "to make Donald Drumpf again," and has launched a campaign via #MakeDonaldDrumpfAgain and the website DonaldJDrumpf.com to do so. Join the movement.

Watch the full segment below.