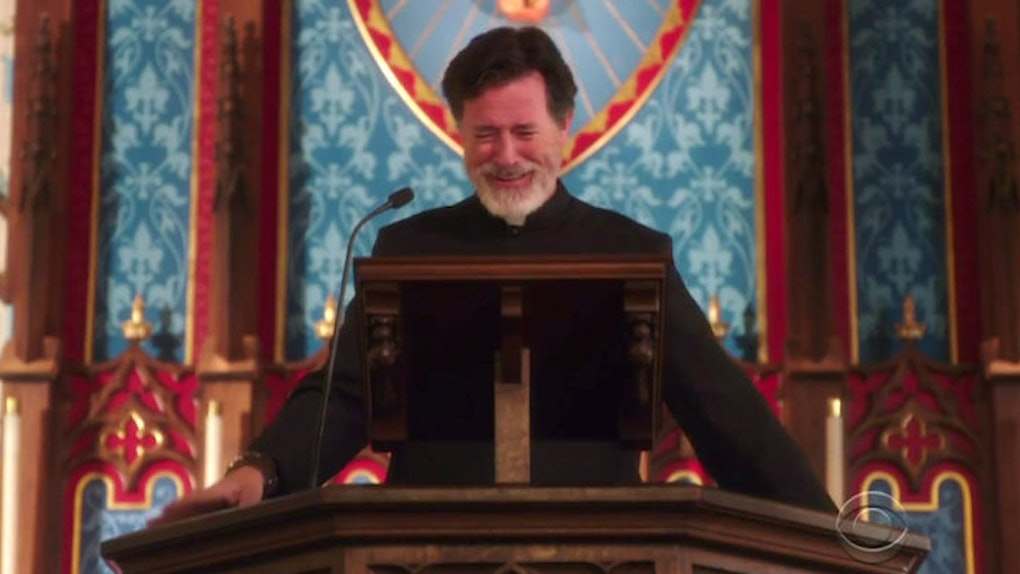 There is basically no one on this Earth more likeable than Stephen Colbert, which is weird considering for a decade he pretended to be a bible-thumping, gun-loving, conservative superhero, and there is probably no better evidence of Colbert's likability than the bloopers Mindy Kaling shared of him when he was on her show.

He did a stint on "The Mindy Project" as a white-bearded priest before he took the reigns of "The Late Show." In the show, he had to do a scene where he gives a eulogy at a funeral.

Apparently, his talent for keeping a straight face, which seemed unparalleled (I mean, dude straight-up testified before congress IN CHARACTER), was completely shattered by Mindy Kaling's script-writing skills.

He couldn't get through a couple sentences before having an utter giggle meltdown. The lines that caused him such trouble were:

Let's all bow out heads for one final prayer for Father Francis… I know some of you called him, quote, 'a decrepit bag of bones'… or 'the boring wizard.'

Yeah, Colbert COULD NOT HANDLE THAT. I mean, it's definitely a funny line, but I really want to know what exactly (a memory? a deep love of "LOTR"?) it was that broke him when little else ever could. Perhaps we shall never know.

Don't worry, though, Colbert had a clip of his own ready to throw back at Mindy Kaling. Watch the video and find out.