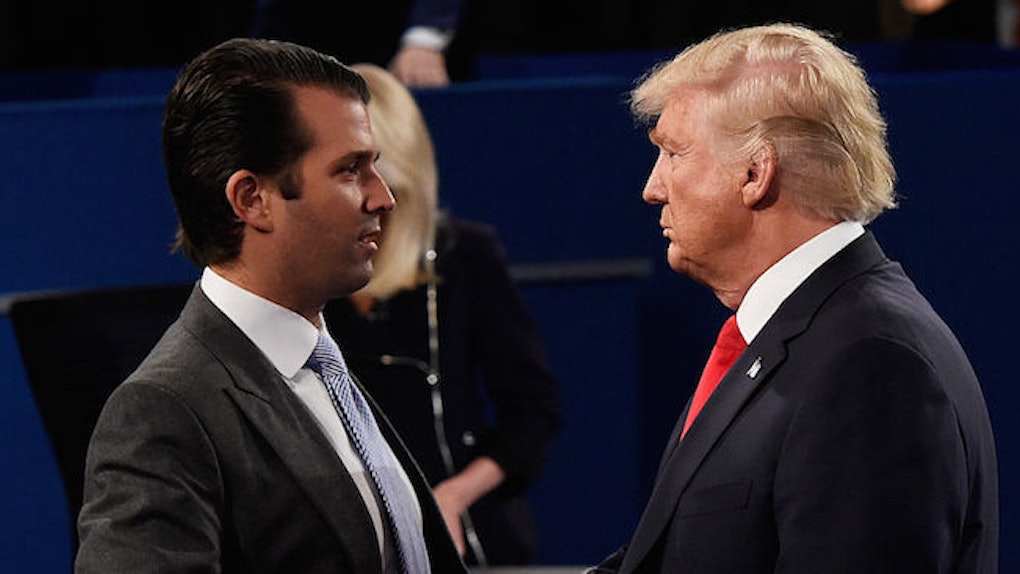 Trump Jr.'s Relationship With Dad Is Built On Mutual Pride, According To Body Language Experts

Last week, The New York Times rolled out report after report on President Donald Trump's son, Donald Trump, Jr., and his hand in the campaign's possible involvement with Russia during election season. The reports revealed that the younger Trump took a meeting with a Russian lawyer, apparently to get dirt on Democratic opponent Hillary Clinton, his emails seemed to show.

With the Trump family in a particularly fierce spotlight these days, many are drawing parallels between father and son, pointing out that the apple doesn't fall too far from the tree. According to two body language experts who spoke with Elite Daily, this family is no exception.

An analysis of their body language reveals that Trump and his son Don Jr. are mirror images of each other. Independently, both experts call Don Jr. a "carbon copy" of his dad. Perhaps their likeness has made them closer, as well.

Father and son have a great deal of pride and respect for each other, says body language expert Dr. Lillian Glass.

Glass notices things like the way Don Jr. teared up while speaking at his father's rally on the campaign trail, and how he speaks with conviction. When he talks up dad, he genuinely means it. She describes him as "the staunchest cheerleader and fiercest advocate" for his father.

While Trump himself has said that he doesn't feel the same about all of children, it's clear he's proud of Trump Jr.. Referring to the elder Trump, Glass says,

Donald is also serious as his son speaks, which indicates that he respects him. When they hug, it is a mutual embrace that is very powerful and affectionate.

In her own words, expert Susan Constantine also commented on Trump Jr.'s specific gestures that mimic his dad's: the "sweeping horizontal hand movements" and "pointed up index finger," among them.

Constantine points out one area where Trump Jr. was different from his dad:

He's [a] polished speaker! His movements and gestures were on point with his words. It was a perfect example of a person with conviction and passion. He exemplified leadership with his commanding tone, gesturing, appropriate pausing, eye contact, posturing, and movements.

Ouch, that's got to hurt.