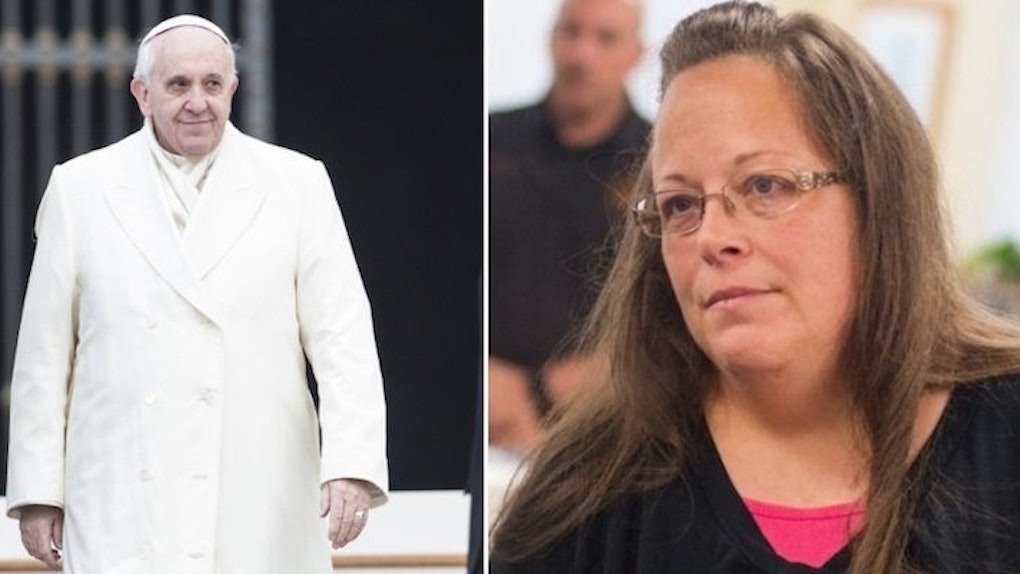 Pope Francis is considered by many to be one of the most progressive religious leaders in recent memory.

His views on poverty, in particular, even led people to label him a "liberal."

His positions on climate change and the death penalty, among other issues, put him at odds with conservative American politicians like Ted Cruz.

But when it comes to some social issues, such as abortion and same-sex marriage, the pope is very much in line with the Catholic Church.

In other words, while it might be fair to say he leans left on a wide array of issues, he is decidedly conservative on these two matters.

The pope revealed this once again on Monday when he seemingly supported the case of Kentucky clerk Kim Davis, who refused marriage licenses to gay couples on religious grounds.

As NBC News reports, the pope told reporters it's a "human right" for government workers to conscientiously object to certain duties.

Supporters of Kim Davis will undoubtedly use the pope's remarks to bolster their positions.

While Davis has the right to object to same-sex marriage on a personal level, as an elected official it's unconstitutional for her to deny marriage licenses to any couple, gay or straight.

Moreover, as people respond to the pope's comments, they should remember he is beholden to church doctrine, and the US was founded upon the notion of separation of church and state.

The pope certainly has a great deal of wisdom and perspective to offer on many issues, but his views on this matter contradict US law.

He may have a more general point, thinking government workers have a "human right" to conscientiously object to duties that are perhaps inhumane or criminal, but the issue of same-sex marriage does not apply.

Not to mention, many would argue same-sex marriage is a human right, or as Amnesty International puts it,

Civil marriage between individuals of the same-sex is... an issue in which fundamental human rights are at stake. Amnesty International believes that the denial of equal civil recognition of same-sex relationships prevents many people from accessing a range of other rights, such as rights to housing and social security, and stigmatizes those relationships in ways that can fuel discrimination and other human rights abuses against people based on their sexual orientation or gender identity.

Indeed, love is love, and it can be dangerous to argue otherwise. As Pope Francis once contended, who are we to judge?