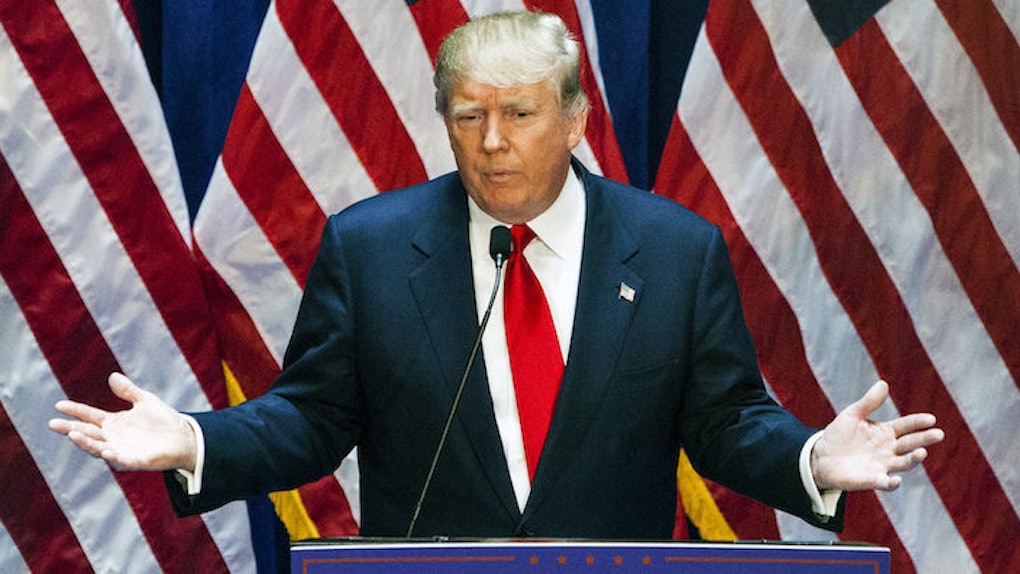 Dear Trump: Obama Isn't Muslim, But Why Would It Matter?

The views of many (if not all) Donald Trump supporters are so hyperbolic and illogical, his entire campaign feels like satire. But this is not a comedy sketch, it's real life. The terrifying thing is they actually believe what they're saying, regardless of how xenophobic, intolerant and ignorant it may be.

What's more, Trump is currently the GOP frontrunner, which means there are a lot of people who share some pretty regressive perspectives. This doesn't offer a very positive reflection of America.

On Thursday, this disturbing reality was on display with flying colors when a man at a Trump rally stated:

We have a problem in this country. It's called Muslims. We know our current president is one. You know he's not even an American.

The man then asked Trump how America can "get rid of" Muslims.

We are going to be looking at a lot of different things. You know, a lot of people are saying that.

Trump made no effort whatsoever to refute the false assertion President Obama is Muslim as well as not American. He also tacitly condoned the man's implicit suggestion Muslims should be eliminated.

Social media exploded after this incident, with many criticizing Trump's silence.

Trump must apologize to the president and American people for continuing the lie that the president is not an American and not a Christian. — Bernie Sanders (@BernieSanders) September 18, 2015

Trump responded to the backlash with this statement to the Washington Post:

The media wants to make this issue about Obama. The bigger issue is that Obama is waging war against Christians in this country. Their religious liberty is at stake.

The truth is, while there is ample reason to be disturbed by Trump's extreme lack of appropriate response, it also comes as no surprise.

For years, Trump has been among the large crop of Americans who continuously question the president's background. Often referred to as birthers, these individuals perpetuate the belief Obama was born in Kenya and, therefore, ineligible to be president. The notion he's Muslim has corresponded with this myth, along with the claim he's a socialist.

In fact, a recent poll found 29 percent of Americans and 43 percent of Republicans believe President Obama is Muslim.

Let's be clear: President Obama is not Muslim. He was born in Hawaii and by every definition is not a socialist.

He's also not waging a war against Christianity, nor is the religious liberty of Christians under any particular threat. Christians have continuously been the most privileged group in this country, particularly white, male Protestants (looking at you, Huckabee).

But the biggest point missing from this discussion: It shouldn't matter if the president, or any leader for that matter, is Muslim because there's nothing wrong with being Muslim.

The myth surrounding Obama's Islamic ties is directly related to rampant Islamophobia in the United States. We were reminded of this irrational fear of Muslims earlier this week when a bright young man was arrested for bringing a homemade clock to school.

We're reminded of it via the fact hate crimes against Muslims are still five times more common today than prior to 9/11.

We're reminded of it given a majority of Americans see Islamic extremism as the nation's greatest existential threat, even though white extremists have killed nearly twice as many Americans since 9/11.

We're reminded of it when state legislatures pass anti-Sharia laws when there is absolutely no risk of them being implemented anywhere in the US.

We're reminded of it when CNN asks respected human rights lawyers if they support ISIS simply because they're Muslim.

Islam is not an indicator of evil, in spite of what individuals like the man at Trump's rally want you to believe.

Moreover, being Christian is not a prerequisite for being president, although when you look at the religious affiliations of most presidents, it seems to be one.

The Constitutional requirements for being president are as follows: One must be 35 years of age, a resident "within the United States" for 14 years and a "natural-born Citizen."

President Obama meets all of those criteria. He also meets the de facto requirement of being Christian.

While he's not quite as hyper-religious as politicians like Republican presidential candidates Mike Huckabee and Ted Cruz, it shouldn't matter.

America was never meant to be a religiously homogenous nation, which is why it was founded on the notion of separation of church and state.

The Founding Fathers (who conservatives love to cite on many other issues) were quite clear on this matter.

John Adams signed the 1797 Treaty with Tripoli with these words:

The Government of the United States of America is not, in any sense, founded on the Christian religion.

Thomas Jefferson, who wrote the Declaration of Independence, had no formal religious affiliation. And, while he's not one of the Founding Fathers, neither did Abraham Lincoln.

As the Atlantic notes, James Madison, who authored the Constitution, "consistently warned against any attempt to blend endorsement of Christianity into the law of the new nation."

Simply put, religion shouldn't impact people's perceptions of a leader, and it should never play a role in governance in the United States.

Donald Trump and his supporters, Kim Davis, Mike Huckabee and Ted Cruz among far too many others, would do well to remember this.

People have every right to criticize a president on the basis of his or her leadership, but nothing justifies using faith as a means of defamation.