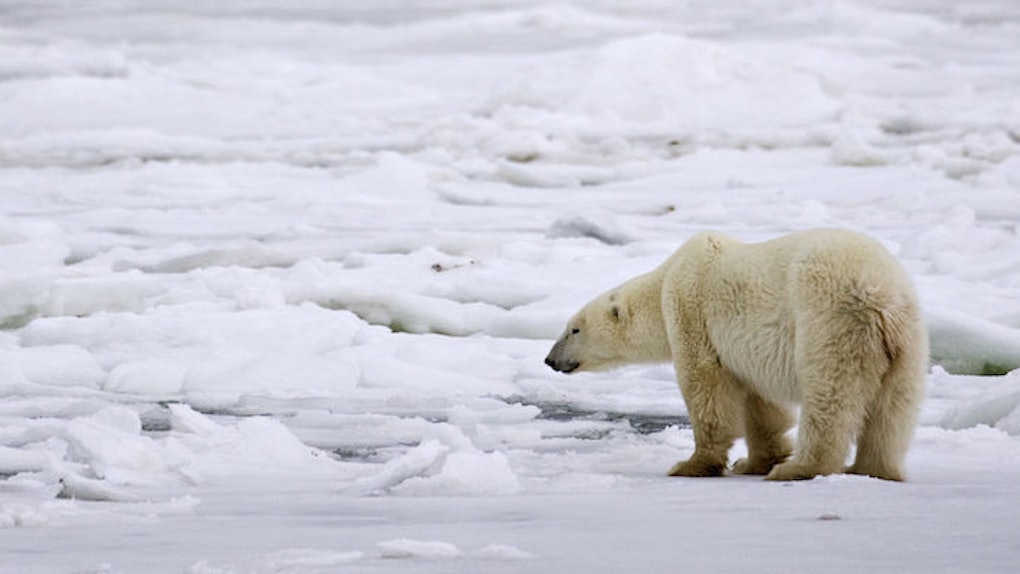 National Geographic asked photographers around the world to expose the devastating impact of climate change, and the images they produced are heartbreaking.

This is the saddest polar bear of all time.

This polar bear is on the edge of the Barter Islands in Alaska, where there is no snow right now, even though there should be, the Washington Post reports.

Climate change is real, it's happening and it's a product of human activities; 2016 will be the hottest year ever recorded.

Our dependency on fossil fuels, addiction to meat and the palm oil industry, among other things, are having a horrendous impact on the environment.

We desperately need to change our behavior.

Yes, that is a photo of a dead polar bear.

It's sadly not uncommon to see polar bear remains like this as climate change continues to make it more difficult for these magnificent animals to survive.

According to the World Wildlife Fund,

Polar bears spend over 50% of their time hunting for food, but less than 2% of their hunts are successful. Their diet mainly consists of ringed and bearded seals because they need large amounts of fat to survive. The total polar bear population is divided into 19 units or subpopulations. Of those, the latest data from the IUCN Polar Bear Specialist Group show that three subpopulations are in decline and that there is a high estimated risk of future decline due to climate change. Because of ongoing and potential loss of their sea ice habitat resulting from climate change, polar bears were listed as a threatened species in the US under the Endangered Species Act in May 2008.

Unfortunately, polar bears are hardly the only species impacted by our warming planet.

Human activities are pushing many species to the brink of extinction.

It's important we work to maintain diverse ecosystems for the overall health of the planet. This isn't just about saving animals — it's about our survival as well.

This is the only planet we have.

Rising sea levels are threatening communities across the world.

The photo above is of the island of Mousuni, located in the Ganges Delta region of West Bengal, India.

We can either wake up and fully acknowledge what's happening, or face the catastrophic consequences of living in denial.