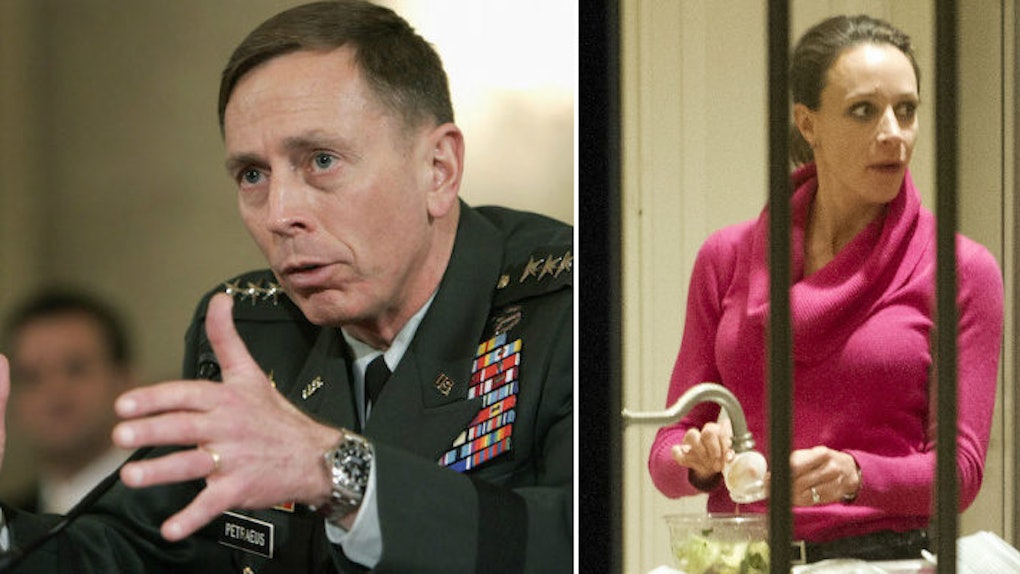 Petraeus Considered For Trump Secretary Of State Despite Past

President-elect Donald Trump is allegedly looking at General Petraeus to be his top diplomat: the secretary of state.

Incidentally, that's the job Hillary Clinton had when she used a private email server because she didn't feel like using two emails/phones, thereby possibly putting United States classified secrets at risk of exposure.

GOP-led hearing and FBI investigations determined there was no legal wrongdoing by Clinton.

General Petraeus, on the other hand, pleaded guilty of intentionally leaking classified information to a woman he was having an affair with when he was the head of the CIA.

(That's the woman he cheated on his wife with. She was actually his biographer, Paula Broadwell. And yes, I am fully aware how weird this picture is, but I didn't have the usage rights to the other one.)

Petraeus was fired for the offense, charged with a misdemeanor, given two years probation and had to pay a $40,000 fine.

He is, in no uncertain terms, a convicted criminal. And, um, kind of a traitor?

Anyway, the hypocrisy of this appointment has not been lost on people.

Steven Aftergood, a specialist on government classification at the Federation of American Scientists, explained the about-face to Politico like this:

The very consideration of Petraeus for a senior position reveals that the Trump campaign's rhetoric regarding Hillary Clinton was totally bogus. Candidate Trump was generating hysteria over Clinton's handling or mishandling of classified information that he likely never believed or took seriously himself.

As Aftergood went on to explain that, unlike Clinton, "Petraeus admitted lying to the FBI, which distinguished his case from Clinton's and made his case a good deal worse."

And yet, Petraeus was considered to be an excellent general and integral to the counterinsurgency in Iraq. And, he still carries a lot of clout with the military, which, as Politico reports, "clashed with President Barack Obama on foreign policy and national security."

The truth of the matter is, it seems hypocrisy is par for the course for Trump. Throughout his campaign, it proved to not really be a deal-breaker at all.

CBS News reports that Petraeus is one of three remaining contenders for Trump's secretary of state. The other two are Rudy Giuliani and Mitt Romney.