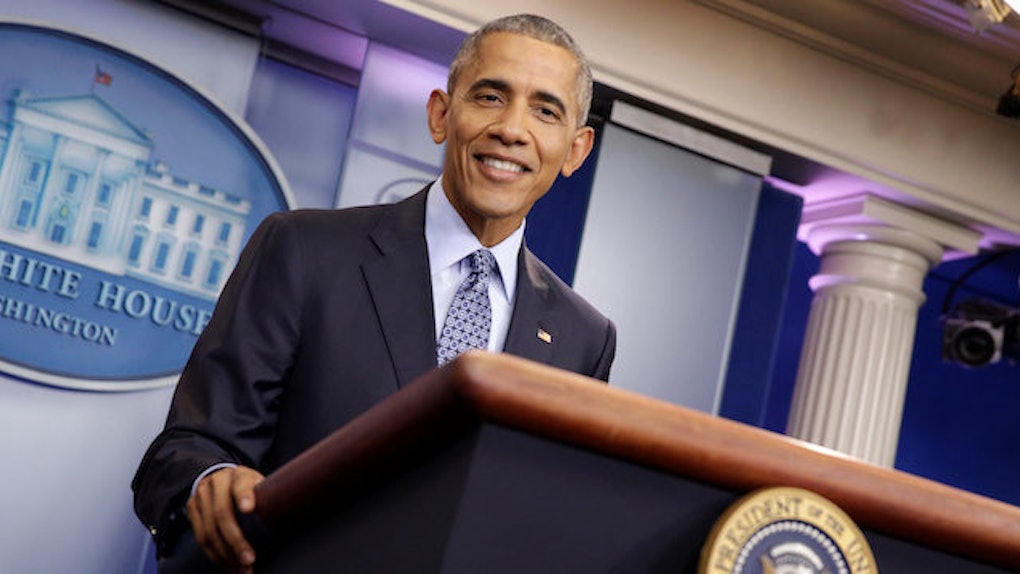 Obama Won't Rule Out Return To Office After Presidency

While we're teary-eyed and trying to avoid the fact he's leaving the Oval Office, he's thinking about the hopeful year that lies ahead.

On Wednesday afternoon, Obama gave his final press conference as the proud leader of our nation, and one of the reporters asked him a question that's undoubtedly been on our minds for months.

What did you mean when you said you would come back? Would you lobby congress, maybe explore the political arena again?

Alas, the question of the hour.

In a lot of people's perfect world, Obama wouldn't even be leaving the White House. But, quite obviously, we do not live in that perfect world.

Upon answering the reporter, Obama didn't exactly say "no."

With effortless poise, he responded and said,

Let me be absolutely clear: I did not mean that I was going to be running for anything anytime soon.

Let that sink in. He ended his statement with "anytime soon."

That certainly doesn't mean he'll never consider a political position again, right? We can take his response and feel a teeny, tiny bit hopeful we'll see him in the political field once more.

Moments later, he elaborated on his answer and acknowledged his direct plans for 2017. Needless to say, his wife and children are a big part of 'em.

During the conference, he stated,

What I meant is that it's important for me to take some time to process this amazing experience that we've gone through; to make sure that my wife, with whom I will be celebrating a 25th anniversary this year, is willing to re-up and put up with me for a little bit longer.

Speaking of Michelle Obama, it was reported back in November that Barack is planning on taking her on a much-need vacation post-presidency.

Obama then went on to speak about more low-key pastimes he hopes to spend after leaving the White House.

I want to do some writing, I want to be quiet a little bit, and not hear myself talk so darn much. I want to spend precious time with my girls.

OK... OK. I guess we'll give him some downtime after his eight-year presidency comes to an end.

But some Americans can keep that little glimmer of hope that someday (not "anytime soon") he'll return to a political office once again.

I'm keeping my fingers crossed — that's for sure.