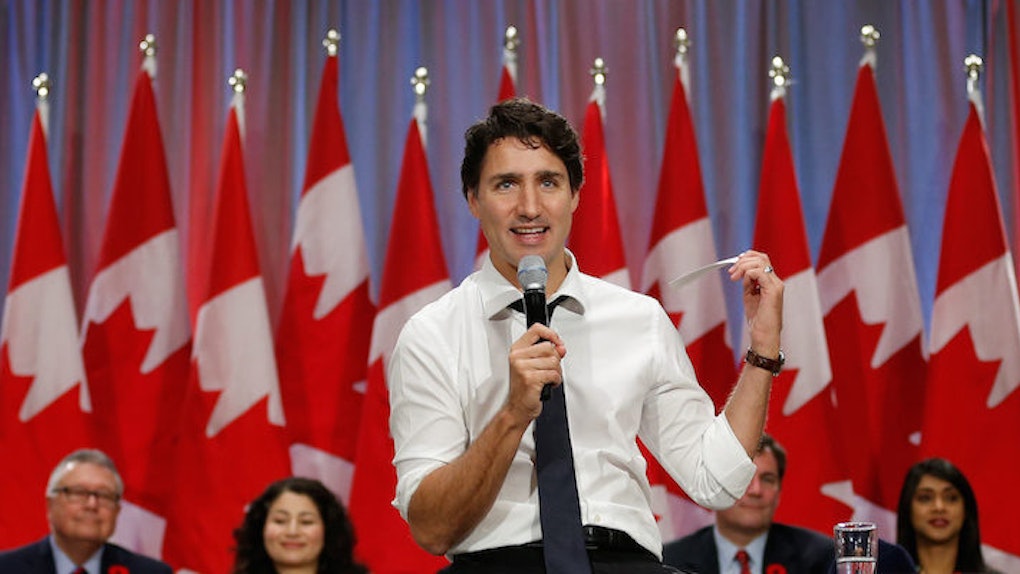 How To Move To Canada If Trump Wins

A lot of people have said they're going to move to Canada if Donald Trump becomes president, including celebrities like Lena Dunham and Bryan Cranston.

Some people who've said that were probably joking. But it seems others might actually be serious.

The number of Americans looking for jobs in Canada has increased by 58 percent since last year, according to the job search engine Monster Worldwide.

Google also recently found the number of searches for "move to Canada" was higher than at any other point in its history.

It seems like the election has people taking the idea of heading up to Canada pretty seriously (or serious enough to Google it, at least).

There's even a Canadian island, Cape Breton, that has invited US citizens to move there if Trump becomes president.

It wouldn't be that surprising to see people leave, given that a recent New York Times/CBS poll showed the vast majority of Americans – 82 percent, to be exact – are absolutely "disgusted" with this election.

There have also been plenty of moments in American history where people have felt inspired to migrate north, especially when they were unhappy.

During the American Revolution, around 100,000 American Loyalists (people who wanted to remain British subjects) fled to Canada.

There were also thousands of African Americans who headed to Canada to escape slavery. They migrated there via the Underground Railroad.

So, migrating to Canada is not exactly a novel idea.

It also might not be the smartest idea, at least from a financial standpoint.

You have to be a legal adult.

If you're not 18, sorry: Moving to Canada by yourself isn't an option.

Canada wants to make sure you have something to offer.

Moving to another country is never easy, and not liking your new president isn't enough of a reason for Canada to accept you.

There are a many different visas you can apply for. If you want to move there, apply for residency sooner rather than later.

Canada chooses skilled immigrants to become permanent residents based on "their ability to settle in Canada and take part in our economy" through a system called Express Entry.

If Canada determines you're eligible, you'll be placed in a pool with other candidates and ranked based on several factors.

Canada invites the top candidates to apply to become permanent residents. If you're invited, you need to let the Canadian government know you plan to stick around.

To apply for citizenship in Canada, you need to be a permanent resident.

Being a permanent resident means you're entitled to health care coverage and most social benefits Canadians receive. You can also live, work or study anywhere in Canada.

But if you want to vote, run for political office or hold certain jobs that require high-level security clearance, you need to become a citizen.

According to the Canadian government, to apply for citizenship,

So, yeah, becoming a citizen requires spending a significant amount of time in Canada. If you love hockey and maple syrup – among the other wonderful things to come out of Canada – that shouldn't be too hard.

You should also know English or French, as well as some basic things about Canada's history.

If you want to become a Canadian citizen, you need to have at least an "adequate knowledge" of French or English.

You also need to know basic things about Canada's history and culture to become a citizen, and are required to take a citizenship test. So study up.

Additionally, make sure your tax records are in order. Canada looks into that.

Also, make sure you have a clean record.

Canada is a friendly place, but it isn't willing to let just anyone in. If you don't have a clean record, you might not be eligible to become a Canadian citizen.

But before you do anything, double check to make sure you're not already Canadian.

If aren't sure whether you might already be a Canadian citizen, take this quiz.