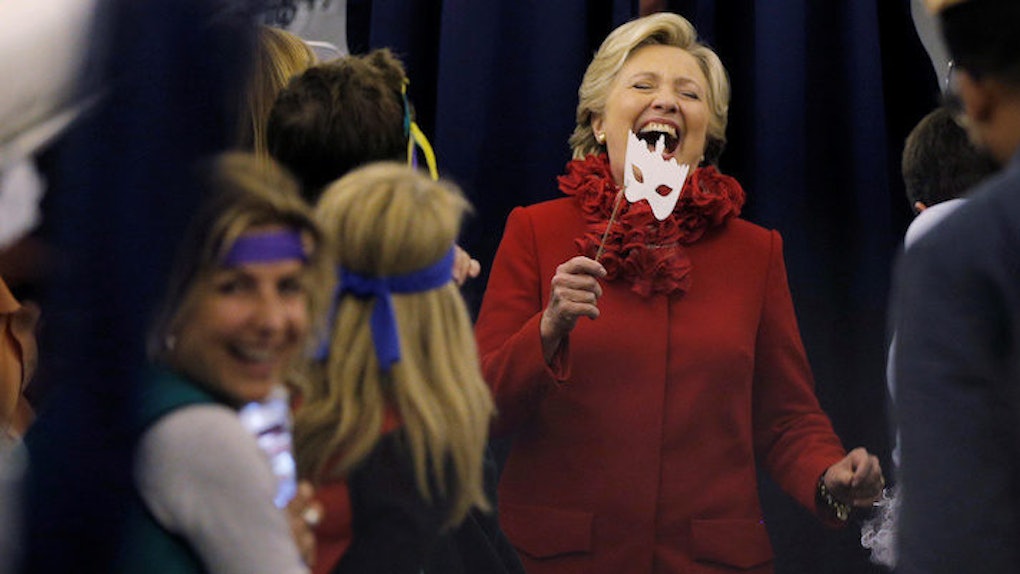 Hillary Clinton Had A Halloween Party On Her Campaign Plane

Forget about bars and trick-or-treating -- I want to party with Hillary Clinton next Halloween.

The Democratic nominee had a spooky night aboard her "Stronger Together" plane with her campaign party on Friday, DailyMail.com reports.

Aides, flight attendants and photographers joined Clinton in costume for a ghoulish celebration in the plane's cabin, and it looked pretty lit.

Seriously, why wasn't I invited?

That wasn't enough to stop the team from getting festive, though.

Flight attendants on the plane didn't miss the party, either. The staff members -- Joysie Garcia, Bethany Green and Jessica Ferriera -- dressed as a witch, a princess and a devil.

Of course, we can't forget about the photographers who inevitably joined in on the festivities.

The three men and woman aboard with their cameras were Andrew Harnik, Justin Sullivan and Melina Mara. They sported blue blazers and red berets while dressing as flight attendants.

Apparently, Harnik carried a carafe of coffee to make the getup as realistic as possible.

Hillary also managed to dress up for the party.

She wore a white masquerade mask and a classy red suit, which was simple and mysterious. You rocked it, Hill.

Based off the photos that were taken mid-flight, she had a blast celebrating Halloween with her campaign members.

It's been reported the "Stronger Together" plane wasn't the only spot the campaign spooked-up for Halloween.

Apparently, the campaign's vans and busses were also decked out for the holiday.

Hm, I wonder what the White House is going to look like next Halloween.

If (when) Clinton moves in, we hope she decorates accordingly and brings the holiday spirit to a new level.