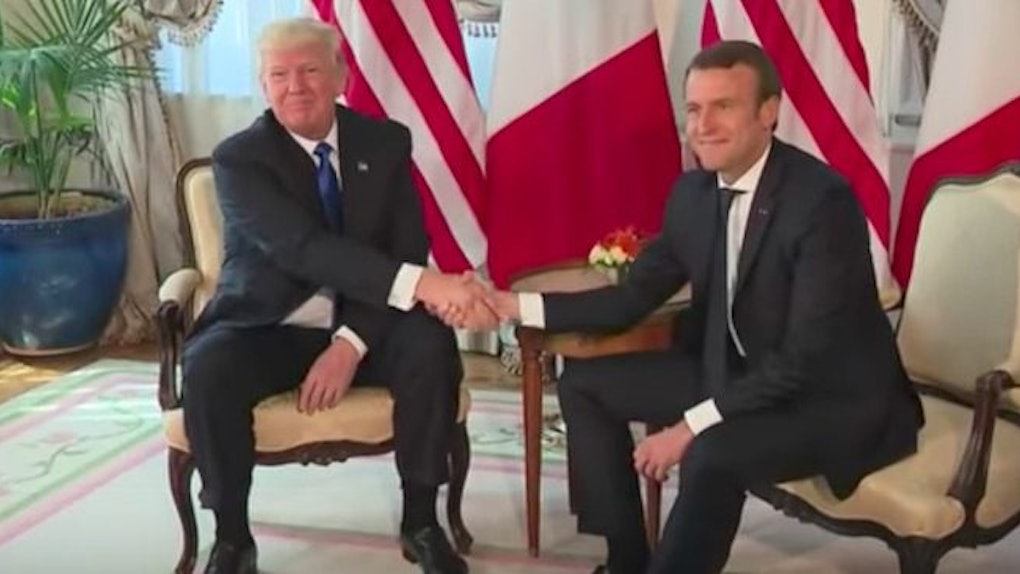 President Donald Trump met with the recently elected French President Emmanuel Macron in Brussels on Thursday, and the two men shared a handshake for the ages.

Trump is notorious for giving awkwardly long and overly forceful handshakes (except for that one time with German Chancellor Angela Merkel), and it seems Macron wanted to send him a message that he will not be messed with.

Their knuckles "turned white," their "jaws clenched," and their "faces tightened" during the death grip they shared, according to the Washington Post.

Trump loosened his grip at one point, but Macron held on for one last squeeze.

This was handshake diplomacy at its finest.

As Philip Rucker, a reporter for The Washington Post who witnessed this epic handshake, put it, "If relationships were defined by how two people shake hands, then the one between the newly elected presidents of the United States and France is going to be rather fierce."

According to Rucker, the handshake lasted approximately six seconds.

"It is my great honor to be with the newly elected president of France, who ran an incredible campaign and had a tremendous victory," Trump said as he sat with Macron, "All over the world they're talking about it."

He congratulated Macron on his victory and said "Great job."

Macron said the two leaders had a great deal to discuss, including "the fight against terrorism, the economy, climate and energy."

The young French leader added, "I am very happy to be able to change many things together."

It will be interesting to see how Trump and Macron work together, given they have starkly different perspectives on an array of issues.

Macron is reportedly eager to convince Trump, who's expressed skepticism climate change is manmade and has referred to it as a "hoax," to stick with the 2015 Paris Agreement -- a global pact to combat climate change.

Both Trump and Macron are in Brussels for a NATO summit, and will then head to Sicily, Italy for the G7 summit that also includes Germany, Britain, Italy, Japan and Canada.

After the two leaders met, they reportedly had veal filet and Belgian chocolate mousse for lunch, which sounds like a nice way to recover from their bone-crushing first encounter.

Citations: s Trump and French President Macron get to know each other with a fierce handshake (The Washington Post), Trump, Macron engage in a little handshake diplomacy (Reuters)