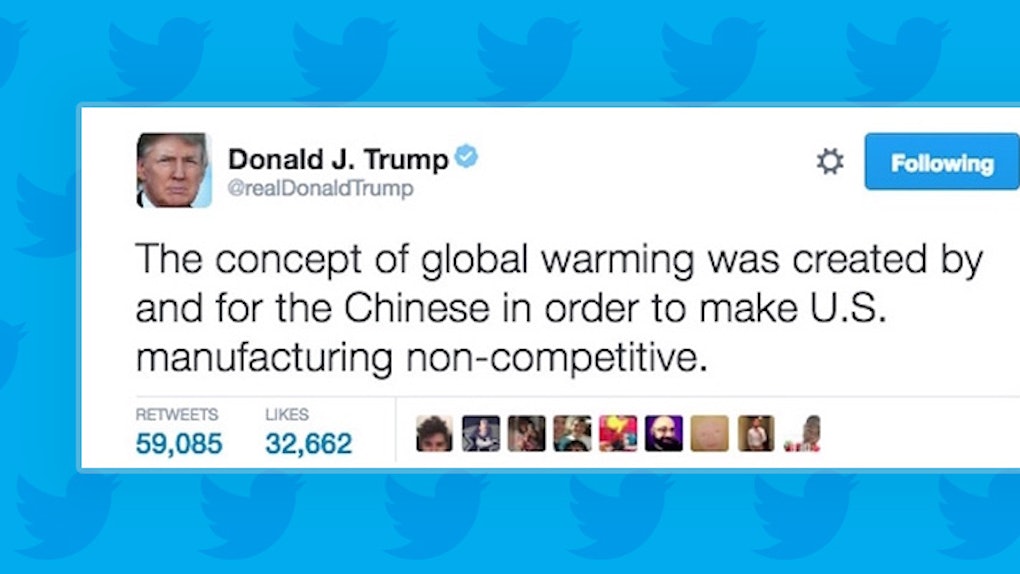 During the first presidential debate on Monday night, Hillary Clinton called out Donald Trump for calling climate change a "hoax."

But the Republican presidential nominee lied and said he "never said that."

Donald thinks [climate change is] a hoax perpetuated by the Chinese.

I did not say that.

But, here's the thing, he actually tweeted that exact claim back in November 2012.

This is what you call a receipt.

Actually, Trump has described climate change as a hoax or lie multiple times on Twitter.

The real estate mogul has even referred to climate change and the science surrounding it as "bullshit."

Twitter is not letting him hear the end of this, and a lot of people are fact-checking Trump with his own tweet.

In the past, Trump has really only expressed concern about climate change when it threatened one of his businesses.

There were some rumors that Trump deleted the tweet he's getting called out for, but that doesn't seem to be the case.

With that said, he might want to consider it.

Climate change is real, it's happening and it's a product of human activities. We can either recognize this or face the devastating consequences.

Trump's economic plans could have a devastating impact on the environment, as they involve eliminating the Clean Power Plan, which aims to curb greenhouse gas emissions from power sources.

It would also eliminate the Waters of the United States rule, which aims to protect Americans from water pollution.

Trump just visited Flint, Michigan, which continues to struggle from a man-made disaster that poisoned its water supply, but he doesn't seem to care about the health of our environment or the impact this has on people's lives.