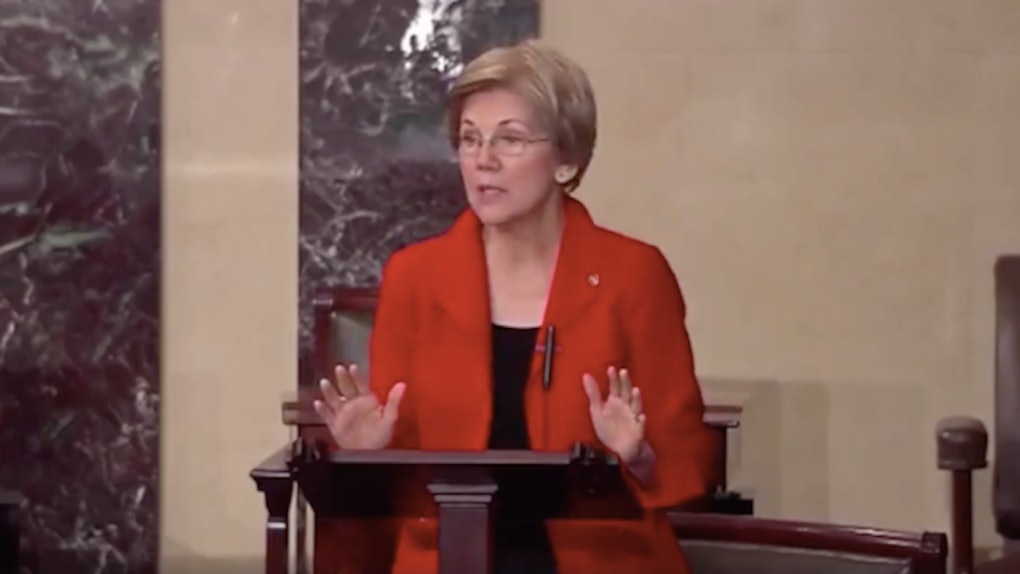 Senator Elizabeth Warren tried to read a letter by Coretta Scott King on the Senate floor during a debate on Attorney General nominee, Senator Jeff Sessions.

Senate Majority Leader Mitch McConnell literally shut her up, along with a vote approved by his fellow Republicans in the Senate.

They didn't want the widow's words heard on Tuesday night.

But because of their attempts to silence Warren, King's words against Sessions were made even louder.

Warren attempted to read the letter as part of a debate about Sessions.

The Democrats are trying to block the senator's nomination to Attorney General.

King, the widow of the famous civil rights leader, wrote a scathing letter to the Senate slamming Sessions's record on civil rights in 1986.

This letter was part of the arguments used to block his nomination as a federal judge in the '80s.

The Senate Republicans stopped Warren from reading the letter.

The senator has impugned the motives and conduct of our colleague from Alabama, as warned by the chair.

He said that she was breaking Rule XIX, an obscure bureaucratic rule that says senators can't be mean to other senators, basically. Because Sessions is a senator, McConnell decided this rule applied.

The Senate then moved to a vote to decide if Warren would be allowed to read the letter. A 49 to 43 vote, anchored by Republicans, approved McConnell's decision that she could not read it.

But the Republicans forgot one big thing: This is the age of social media.

Senators have more platforms than just the Senate floor from which to speak.

As this happened, #LetLizSpeak started trending on social media, led by Senate Democrats. Word quickly spread that Warren had been silenced.

These debates have been going on for weeks, largely under-discussed outside of wonky circles. Cory Booker and other Democratic senators have made passionate appeals against Sessions, but none have been as loudly heard as Warren's silencing.

Had McConnell just let her speak, it's likely very few people outside of Capitol Hill would've even known she had read King's letter.

By Wednesday morning, the video had been viewed nearly six million times.

Seems like McConnell didn't do such a great job keeping the letter quiet.

By trying to silence Warren and King's words, McConnell got them more attention -- and created a rallying cry.

Back on the Senate floor, McConnell defended his actions. He said,

Soon enough, #ShePersisted started trending on Twitter, complete with historical references to women who made change.

Despite the noise being made, it's seemingly unlikely at this point that Sessions will be blocked as Attorney General.

On Tuesday, the Senate voted in Betsy DeVos as secretary of Education, in the tightest vote of all time for a confirmation. Vice President Mike Pence had to break the tie.

Two Republicans voted against DeVos, but opponents couldn't get one more Republican to swing the vote against her. With this in the background, the Democrats' work against Sessions seems futile.