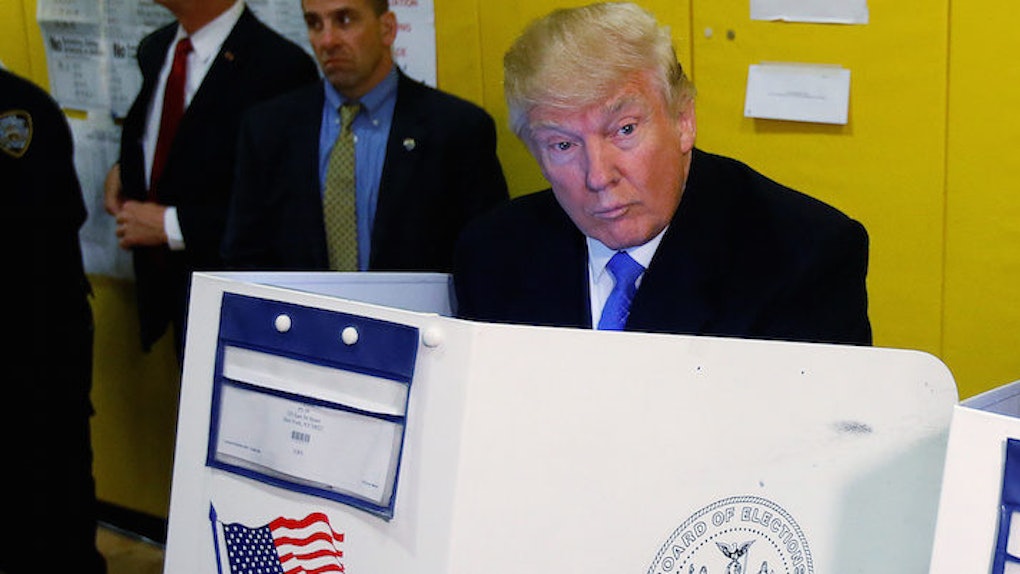 On Tuesday, Donald Trump showed up to his polling place in New York City to vote for himself and was met with a chorus of boos.

The Big Apple really knows how to make a guy feel welcome.

The booing aptly sums up how a lot of people feel about Trump, his campaign and this election in general.

Apparently, Trump also got booed when he left.

People are already trolling Trump about it, and it's beautiful.

Trump also looked a little suspicious as he watched his wife vote. Was he worried she'd go for his opponent, Hillary Clinton?

Meanwhile, Clinton was met with cheers at her polling place in Chappaqua, NY.

It also appears Eric Trump, the Republican presidential nominee's son, might've broken the law by taking a photo of his ballot.

In New York, it's against the law to take photos of your ballot (this includes selfies).

Eric Trump tweeted a photo of his ballot.

New York is not unique in terms of barring photos at polling places. Many states have these laws in place in order to prevent voter fraud.

The concern is photos make paid votes more likely, given the only way you could really prove you voted the way you were paid to do is with a photo.

It's somewhat ironic Trump's son violated a law that's in place because of concerns of voter fraud, given the real estate mogul has been arguing voter fraud is a massive problem in the US for weeks (it's not).

So, it's safe to say the Trump family didn't have the best time voting today.

Maybe it's a sign of what will ultimately happen?