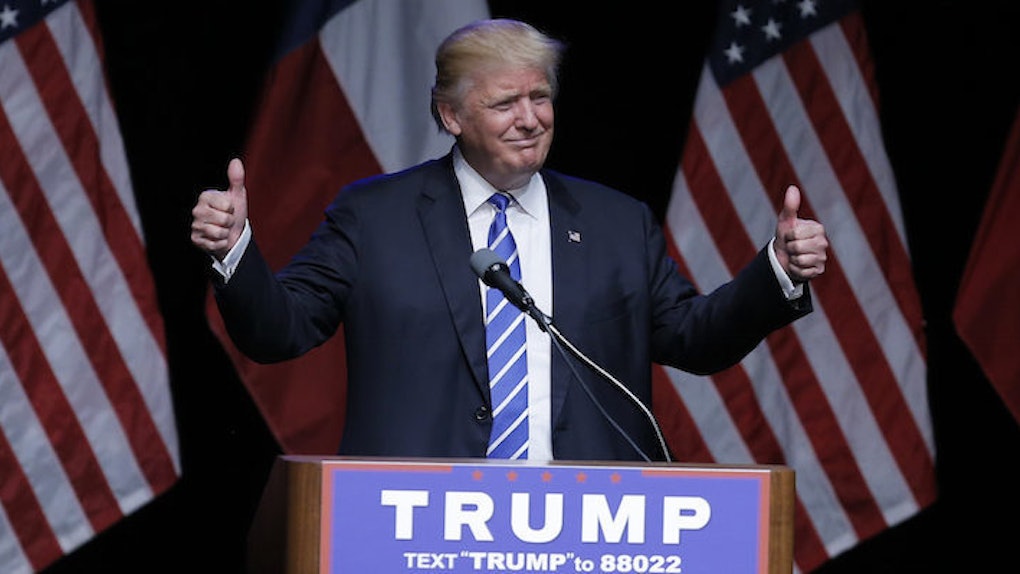 The bromance between Donald Trump and Russian President Vladimir Putin continued on Friday at the Russian Economic Forum in St. Petersburg, Russia.

Back in December, Putin stated,

[Trump] is a bright personality, a talented person, no doubt about it. It is not up to us to appraise his positive sides, it is up to the U.S. voters. but, as we can see, he is an absolute leader in the presidential race. He is saying that he wants to move to a different level of relations with Russia, to a closer, deeper one. How can we not welcome that? Of course, we welcome that.

In response to these comments, Trump said,

It is always a great honor to be so nicely complimented by a man so highly respected within his own country and beyond. I have always felt that Russia and the United States should be able to work well with each other towards defeating terrorism and restoring world peace, not to mention trade and all of the other benefits derived from mutual respect.

On Friday, Putin reaffirmed his praise for Trump, once again describing him as a "bright" person, while also reiterating his appreciation for the real estate mogul's desire to strengthen US-Russia relations.

Trump doesn't seem to care about Putin's authoritarian tendencies or his abysmal record on gay rights (even though Trump claims to be "much better for the gays"), as he's very amenable to flattery.

It seems it won't be long until these guys are doing shirtless calendars together.

[Trump] is a bright personality, a talented person, no doubt about it.

Normally, a bromance, or mutual admiration between two men, is kind of adorable. In the hyper-masculine world we live in, most men are afraid to express fondness for one another, which is why it's pretty enjoyable to witness an unabashed bromance.

But when it comes to Trump and Putin, two individuals who aren't afraid to champion regressive policies when it suits them, it's very disconcerting to think they could both be leaders of major countries at the same time. That definitely ruins the adorable-factor of their brotherly love.

But here's why this bromance, however vomit-inducing, actually makes sense.

Trump and Putin are not fans of criticism.

It's no secret Trump throws a Twitter tantrum anytime someone criticizes him, and also recently caused uproar by revoking The Washington Post's press credentials for writing an article he didn't like.

While Trump has arguably been more accessible to the press than other candidates, such as Hillary Clinton, statements he's made regarding libel laws and other issues related to freedom of the press are unsettling.

Meanwhile, people who criticize Putin have a habit of ending up imprisoned or dead, especially journalists.

Trump and Putin are incredibly insecure about their manhood.

Trump is an incredibly sensitive person who gets especially defensive when it comes to appearing virile. When Senator Marco Rubio made fun of the size of Trump's hands, the New York billionaire assured everyone there was no problem with the size of his, well, you get the picture.

Putin, like Trump, also works hard to appear like a macho man, and rides horses shirtless to prove it.

In terms of image, to Putin's credit, he seems to have accepted that he's balding, as opposed to whatever is going on with Trump's hair.

Trump and Putin both hate Obama.

The one thing that really brings Trump and Putin together is a strong disdain for President Obama.

Trump loves to suggest the president is a Muslim from Kenya. Correspondingly, Putin loves to characterize Obama as a weak and hypocritical leader. Although, Putin did recently say he thinks the president is a "decent" and "very responsible man." Still, Putin and Obama have definitely had some pretty epic staring contests, highlighting their mutual animosity.

It's pretty safe to say if Trump gets elected, he and Putin will spend a lot of time talking smack about President Obama.