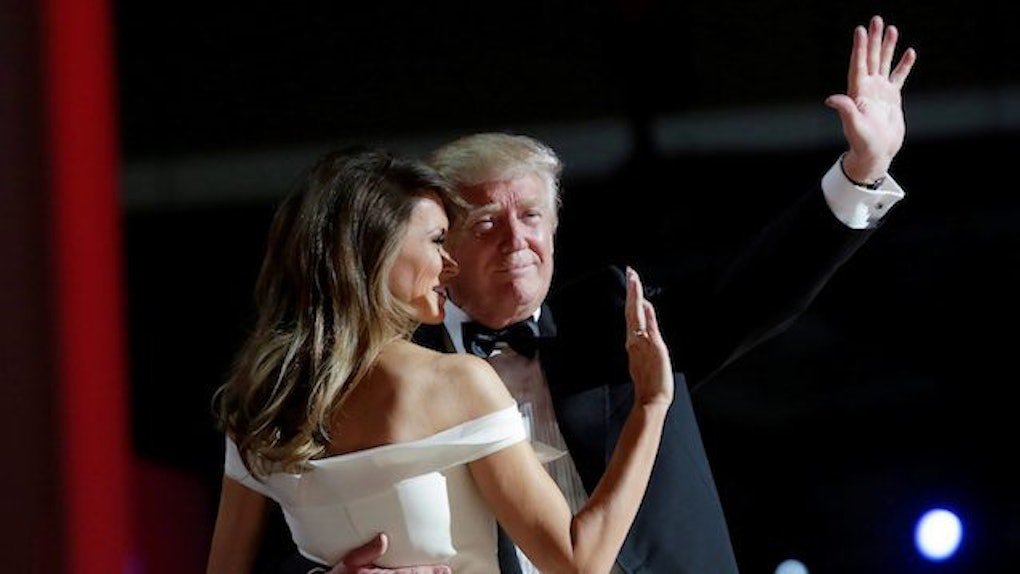 Well, it happened. A 12-year-old was inaugurated as president of the United States.

And after that, he went to a glorified sock hop, took his lady's waist and swayed around awkwardly for four minutes until the song finally ended.

Yes, last night, January 20, Donald Trump and Melania Trump took to the stage at the Liberty Ball in Washington to have their first dance as president and first lady of the United States.

Now, I'm not one to boast any dance skills whatsoever. I'm just saying, Donald and Melania look like every middle-school couple who tries to dance, but just moves their feet in a circle and doesn't even look at the person they're dancing with.

At one point, Trump even decided the first dance was prime time to start fist bumping, which was probably a signal for the song "Shots" to start playing (because all of us — even Trump — probably needed a few). ~So relatable.~

Basically, there was a lot more pointing and waving than there was dancing.

But the minute Mike Pence and his wife joined Trump and Melania on stage, that was when the party really started.

In the video, Donald Trump can be seen grabbing Mike Pence's shoulder, while he's still trying to dance with Melania.

It was like when your best friend also gets a girl on the dance floor at the sock hop, and you're excited because you're secretly not leaving that much room for Jesus.

ANYWAY, according to Mail Online, the performer covering the Frank Sinatra classic even missed his cue at one point, maybe because he was cringing so hard watching this all go down.

And of course, some people said what we were all thinking: THIS DANCE AIN'T GOT NOTHIN' ON BARACK AND MICHELLE.

Everyone was also astounded by the pretty, uh, fitting (unfortunately) opening line in the song...

Some people were predicting how awkward the first dance was going to be before it even started.

But some of us were just asking the real questions.

Dancing isn't easy, especially when you have so many people watching you. But hopefully Donald can graduate to a high school dance sometime soon, at least for Melania's sake.

Citations: 'The most awkward first dance ever?' Donald Trump and Melania are mocked for 'bizarre' performance to Frank Sinatra's My Way at Inaugural Ball (The Daily Mail)