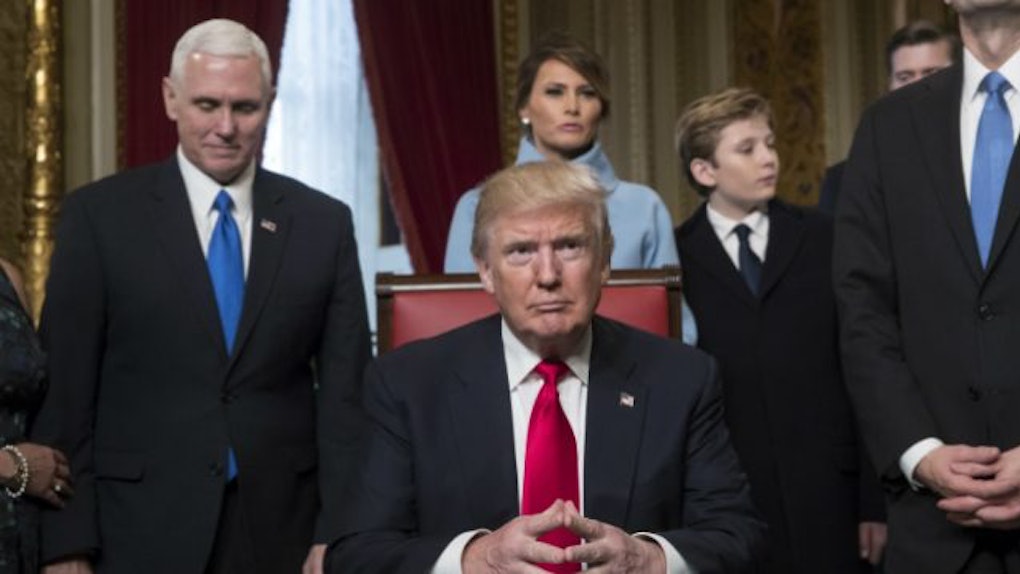 11 Snaps Trump Will Send Now That He's On Snapchat

Facebook has been overrun with parents and religious aunts who live in Arizona who share memes and food videos.

Instagram is full of models and protein shake sponsored posts.

But Twitter is home to a reality TV star turned President.

President Donald Trump not only was sworn in as the 45th President of the United States today -- he also joined Snapchat.

Trump, who stuck with Twitter during his campaign season, while Bernie Sanders joined Snapchat (though he did call it "Snapshot" in his tweet, because he is a cool grandpa), sent out his first two snaps while on his way to the White House in his heavily armored car.

Which, same, if I was in a fancy car that could protect me from bullets I would totally snap it.

That said, we all know what Snapchat is for, and we can expect our President to use it as such.

Like every red blooded American, Trump will absolutely take advantage of filters, selfies and nudes that disappear after seven seconds.

So, feel free to follow Donald Trump on Snapchat, but be forewarned, dear reader, for you will be bound to receive a number of Snaps from your new President at 3AM.

President Trump will remind you of all the fun we've had during his campaign.

And he'll remind his constituents of the morals he was elected for.

He will reach to close the gap between millennials, the LGBTQ and the Republican party.

He will keep the citizens updated with what he does with his time while he is in office.

He will make America great again, as promised, but now as a cute deer.

What can you expect from Tump on Snapchat at 3AM? pic.twitter.com/Tee4CriWL4 — Hope Schreiber (@HopeSchreiber) January 20, 2017

Rumors will be dispelled.

He will continue to confront fake news.

He will post beautiful throwback photos of his wife.

He will show how much of a family man he truly is.

Maybe he will document his sons taking over his business.

He will introduce us to other politicians and their stance on many issues.

It will be a very interesting four years.