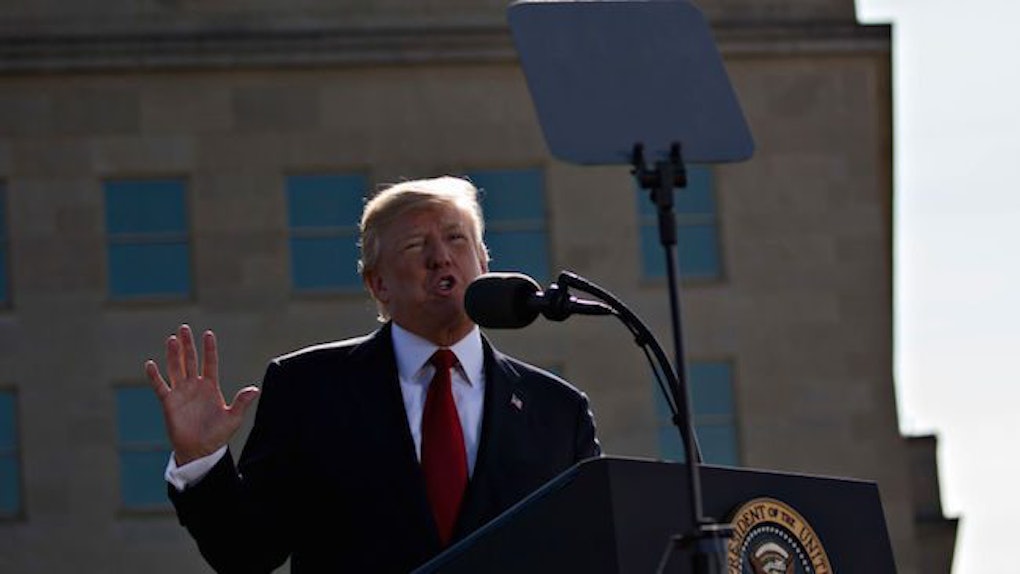 How Did Trump Commemorate 9/11? He Spoke At The Pentagon

After a hectic weekend already heavy with mourning following a series of natural disasters, the nation had another tragedy in mind. On Monday morning, President Donald Trump commemorated the anniversary of the 9/11 terrorist attacks with a moment of silence and a speech. Monday, Sept. 11, marked 16 years since the coordinated hijacking of four consumer airplanes aiming for national landmarks crashed, leaving about 3,000 dead and another 6,000 injured, with individuals from 57 countries.

At 8:46 a.m., the time when the first plane crashed into the World Trade Center, President Trump and First Lady Melania led a moment of silence on the White House lawn. At the Pentagon, the site of one of the other three plane crashes that day, President Trump gave a speech in observance of the attack. The speech read in part,

For the families with us on this anniversary, we know that not a single day goes by when you don't think about the loved ones stolen from your life.  Today, our entire nation grieves with you and with every family of those 2,977 innocent souls who were murdered by terrorists 16 years ago.

His remarks were echoed by Donald J. Trump for President, Inc., the president's official campaign organization, which released a statement on the anniversary as well. In it, Executive Director Michael S. Glassner was quoted saying,

President Trump and many of us in the campaign headquarters in New York City still remember 9-11 as if it just happened. We join all Americans to pause and reflect in prayer and mournful remembrance today. We also join the President in drawing from the memories of this day to inspire and motivate us to ensure that a 9-11 never occurs on our soil again and to confront the evils that persist to destroy our freedoms.

As of 2 p.m. ET, the president had not yet tweeted any commemoration or acknowledgement of the 16-year anniversary. His wife, though, did, sharing a photo from the moment of silence held this morning at the White House.

Former President Barack Obama, as well, shared a message in honor of the day.

But some were critical of Trump's former responses to the tragic day.

The New York native drew especially sharp criticism for discussing the height of his building immediately after the wreckage.

Regardless of what he'd said before, President Trump's speech on Monday seemed uncharacteristically eloquent, though it tread a bit heavy on the sensational rhetoric for my taste. A sampler:

American forces are relentlessly pursuing and destroying the enemies of all civilized people, ensuring -- and these are horrible, horrible enemies -- enemies like we've never seen before. ... We are making plain to these savage killers that there is no dark corner beyond our reach ...

Compare Trump's speech to the one former President Obama gave on the 15th anniversary in 2016, and you'll notice a comparable absence of the words "evil," "barbaric," "savage," or "enemies" in the latter. Many news reports, as well, latched onto the extreme, cloaked-threat terms the president used in his address: "horrible, horrible enemies," for example, "enemies like we've never seen before," and "vanquished enemies." (Really, was all that necessary?)

Certainly, this seemed to be a dramatic shift from the Trump who spoke of the Charlottesville attack last month. Looking at both remarks side by side, most telling was where the "evil" lied: for 9/11, the "terrorists" were "savage killers" promoting evil; for Charlottesville, it was "racism," which was "evil," and its purveyors were merely "criminals and thugs." (At what point does a group of people take ownership of the evil they create? But hey, maybe I'm reading into it.)

In any case, it was only the first of President Trump's first addresses marking the tragedy. And on this day, in whatever form it comes, honoring the victims -- and heroes -- is what's most important.