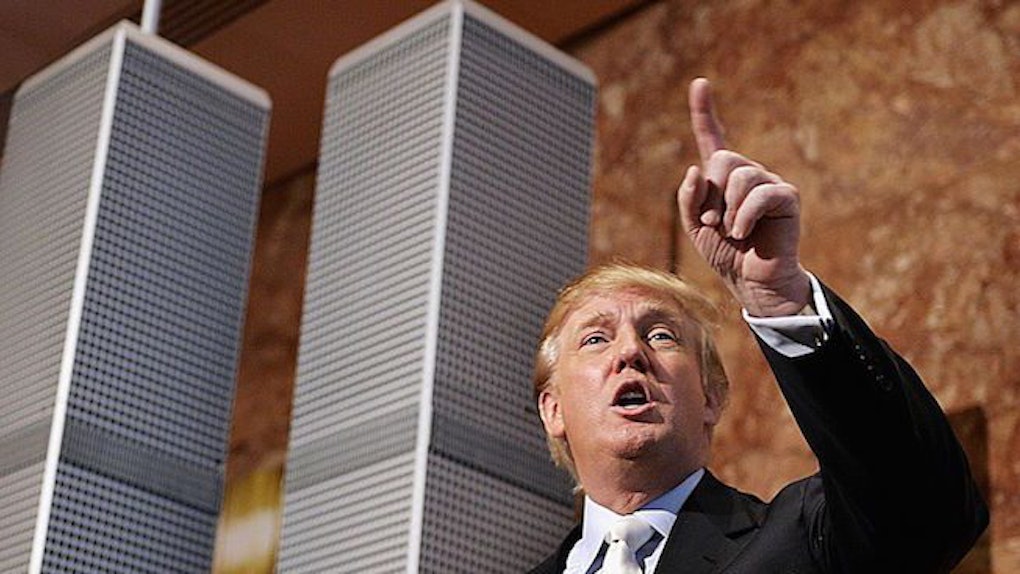 Where Was Trump On 9/11? In New York & Doing Interviews

As the nation commemorates the 16th anniversary of the Sept. 11, 2001 attacks, people everywhere are sharing their memories of where they were on that historic day. This is especially relevant for people who were in or around New York City, Washington D.C., and Somerset County, Pennsylvania, when the attacks happened. One of those people happened to be President Donald Trump. Trump was in New York City on 9/11 -- and taking interviews.

This was a big topic of conversation last year during the election, as people compared the 9/11 experiences of Trump and Hillary Clinton. Some people falsely reported that Trump was in Chicago on Sept. 11, 2001, but that story has been proven very much not true. The reality is that Trump, a veritable icon of New York, was, in fact, in the city when the Twin Towers were struck that Tuesday morning 16 years ago.

During the election last year, Politico reported out the whereabouts of Clinton and Trump on that day. According to that report, Trump was in his Fifth Avenue Trump Tower when the attacks happened. First, he saw the attacks on television, and then he saw it right from looking out his windows. (The Fifth Avenue Trump Tower is in Midtown, about four miles away from where the Twin Towers stood.)

"We saw it out the window. I was sitting in his office," Trump's attorney and an executive vice president of the Trump Organization, George Ross, told Politico. He said there was "unbelief" in the office.

"I saw the whole thing,” Trump later told Howard Stern, according to Politico. “I mean, specifically, I have two windows that are focused on the building."

Then, Trump ended up doing a 10-minute interview on-air with local New Jersey/New York news station WWOR. It is this interview that ends up getting a lot of attention from critics when the topic of 9/11 comes up. That's because in the course of the 10-minute talk with reporter Alan Marcus, Trump talked about the size of his downtown building 40 Wall Street. Trump bought that building in 1995, characteristically renaming it "The Trump Building," although the actual ownership is a bit of a real estate mess, the Real Deal reported.

With the Twin Towers falling, Trump thought about his building.

So, yes, for a moment there on 9/11, Trump comforted himself by thinking of one of his favorite topics: size, and being bigger than everyone else.

Two days after the attack, Trump was at Ground Zero, the site of the fallen towers, wearing a black suit, white shirt, and red tie, according to Politico. Trump actually factors into my own family's 9/11 story, oddly enough. My uncle works in construction and had an office by the Twin Towers that was used as a triage site during the attacks. So in the days after Sept. 11, 2001, my uncle was given a jacket and helmet and walked around Ground Zero.

There was dust and smoke everywhere. And then, out of the smoke, my uncle's story goes, there emerged Donald Trump in a suit, amid the workers in gear and the chaotic sprawl of response efforts. My uncle thought to himself that of course Donald Trump, that New York real estate icon, was present for this devastating New York moment.

In the years after 9/11, Trump made a lot of wacky statements about the attacks and the buildings. But the fact remains that Trump was there.