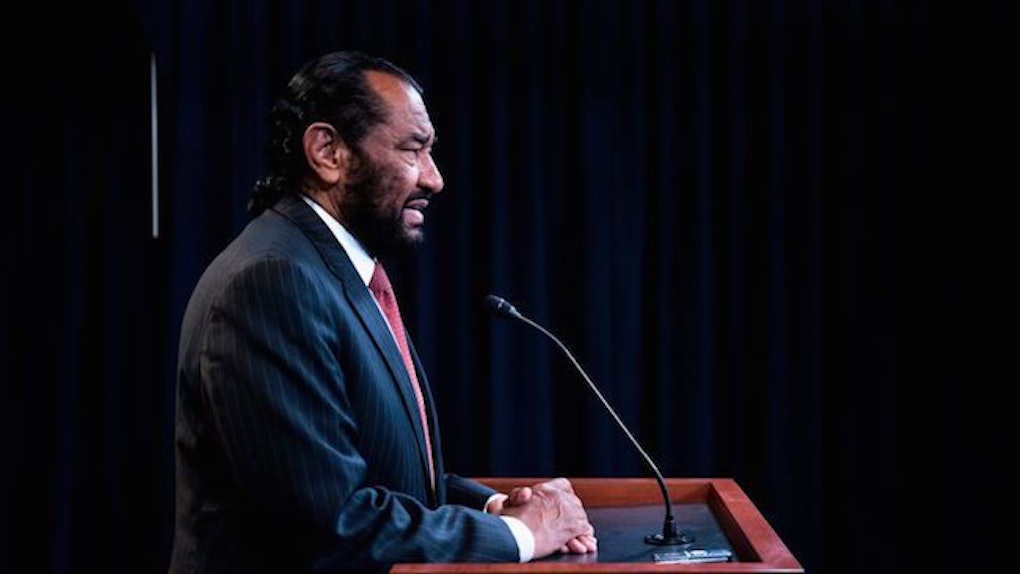 When Can Trump Be Impeached? Rep. Al Green Is Pushing For A Start Next Week

Impeachment isn't exactly a new idea, even for this administration. Already, people from all corners of the country -- Congress members included -- have hinted at getting that ball rolling before. But now, the question of when President Donald Trump might be impeached just got a lot more real, as Representative Al Green, Democrat of Texas, announced on Tuesday, Sept. 26, his plan to do just that.

On Tuesday, Green announced in the House chamber that he intends to file a resolution that will force a vote next week. He said,

I will stand here in the well of the Congress, and I will call for the impeachment of the president of the United States of America.

This isn't the first time the Texan has made such an announcement. In May, Green called for Trump's impeachment on the Senate floor, later receiving death threats for doing so.

In June, Green had stated his intention to begin drafting articles for impeachment, according to NBC. The primary reason he gave was Trump's firing of former FBI Director James Comey, which would fall under the category of obstruction of justice.

At the time, Green threatened to pull the trigger and force a vote if Trump also fired the new investigator Robert Mueller, which didn't happen. Then in July, Green signed onto a resolution by Rep. Brad Sherman (D-CA) on the same grounds of obstruction of justice.

But now, the reasons Green is calling for impeachment are different. A member of the Congressional Black Caucus, he cited the president's response over the weekend to the players who opted to protest during the national anthem at NFL games. In his Tuesday remarks, Green said,

I rise today as a proud American. A person who believes in his country, who salutes the flag and says the Pledge of Allegiance and sings the national anthem. I rise today to make comments that I never though I'd have to make in the well of the House of Congress. I rise today to defend, denounce, and announce. I rise today to defend any son who is called the son of a dog because he engaged in peaceful protest. This is a level of indecency that is unbecoming of the presidency. ... My heart tells me that I must do something. I denounce the comments that were made, and I rise to announce that on next week, I will bring a privileged resolution before the Congress of the United States of America.

It's not clear whether the grounds of obstruction of justice after firing Comey will still be on the table when Green brings his resolution next week.

Numerous scholars and experts before have laid out the articles for impeachment, like Georgetown University Law professor Phillip Carter in an op-ed for Slate.

The process for impeachment is complicated, but Green's statement on Tuesday shows it's the farthest along we've seen the process go so far in this administration.

First, a member of the House must draft the articles for impeachment laying out what specific crimes they are charging the president with having committed and under which categories they fall. After a member of the House (anyone but a speaker or leader) brings forth an impeachment resolution, they have two working days to bring it to a vote, The Hill reports. Next, the House votes on whether or not to try the case. (This whole part in the House is the actual impeachment.) Next comes the trial. With a majority of votes from the House, the Senate hears the case, with a Supreme Court justice acting as judge and members of the House as prosecution.

Currently, the GOP holds the majority of the House, so if any impeachment resolution is brought, it would need to support from a fair number of Republicans to move forward.

It's likely that the Republicans will reject Green's privileged resolution, but he can still force a vote, The Hill reports. It's not clear which day the resolution will be introduced.