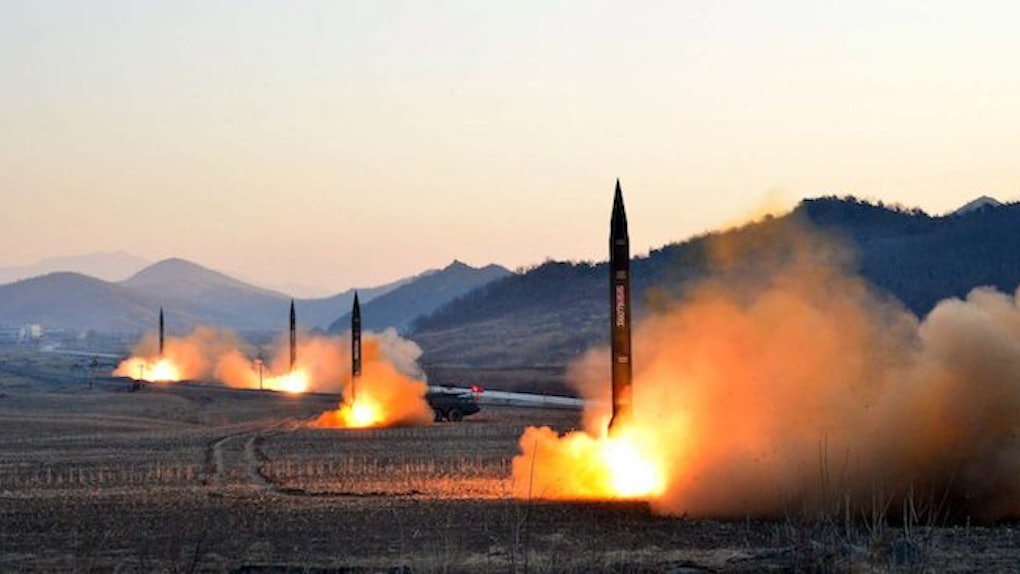 How Far Can North Korean Missiles Go? A New Test Just Fired A Missile Over Japan

If you were hoping the recent lack of North Korean news meant tensions were easing up... well, there goes that. The Pentagon confirmed on Aug. 28 that North Korea fired a missile over Japan, according to The Associated Press. It's another mark of the scary amount of progress that the country has made in developing a far-reaching weapon.

South Korea's Joint Chiefs released a statement saying that North Korea "fired an unidentified projectile," which flew to the east of the Korean Peninsula and over the Japanese island of Hokkaido. The missile managed to make it 1677 miles and hit a maximum height of 341 miles before dropping. According to Japanese officials, the weapon broke into three parts, and did not cause any damage. This is the first time that North Korea has successfully fired a missile over Japan since 1998.

Japanese Prime Minister Shinzo Abe told reporters that the government was working to gain as much insight into the launch as possible, per CNN. He added that North Korea is posing a “an unprecedented, serious, grave threat” and actions must be taken immediately.

We have lodged a firm protest to North Korea. We have requested an urgent meeting of the U.N. Security Council. Under the strong Japan-U.S. alliance, we will take all the measures to confirm people's safety.

North Korea's sudden willingness to launch a weapon over Japan might not bode well for US-Japanese relations, either.

David Wright, co-director of the Global Security Program at the Union of Concerned Scientists, told CNN,

This will make it more difficult for the U.S. to get Japanese support for diplomacy, unfortunately, at exactly the time when the situation is heating up.

This testing comes just days after North Korea launched three ballistic missiles, and a few weeks after sending out an intercontinental ballistic missile. The latter ended up flying for 45 minutes and landed in the Sea of Japan. According to  Wright, if the missile's trajectory had been flatter it would have had the ability to reach the United States, going as far as Los Angeles, Denver and Chicago, with the potential to reach New York and Boston.

It's another troubling move in the recent relations between the U.S. and North Korea.

In the past few weeks, the U.S. and North Korea have exchanged a series of blustery threats. On Aug. 8, President Donald Trump declared that the United States would unleash “fire and fury” if North Korea continued with its missile testing. The president also added that the country could expect "power the likes of which this world has never seen before.”

Shortly after, North Korea threatened to attack Guam, a American territory in the Western Pacific, with missiles. In a statement released by North Korea's state media, per CNN, the country's leader blamed Trump for escalating issues. He said,

Trump is driving the situation on the Korean peninsula to the brink of a nuclear war, making such outcries as “the U.S. will not rule out a war against the DPRK [Democratic People's Republic of Korea].”

Meanwhile, Trump has suggested that North Korea's leader Kim Jong-Un essentially was too bored with his life, and needed another hobby.

Here's hoping that while we await more news on North Korea, Trump keeps any and all aggressive thoughts about the country's leader to himself.