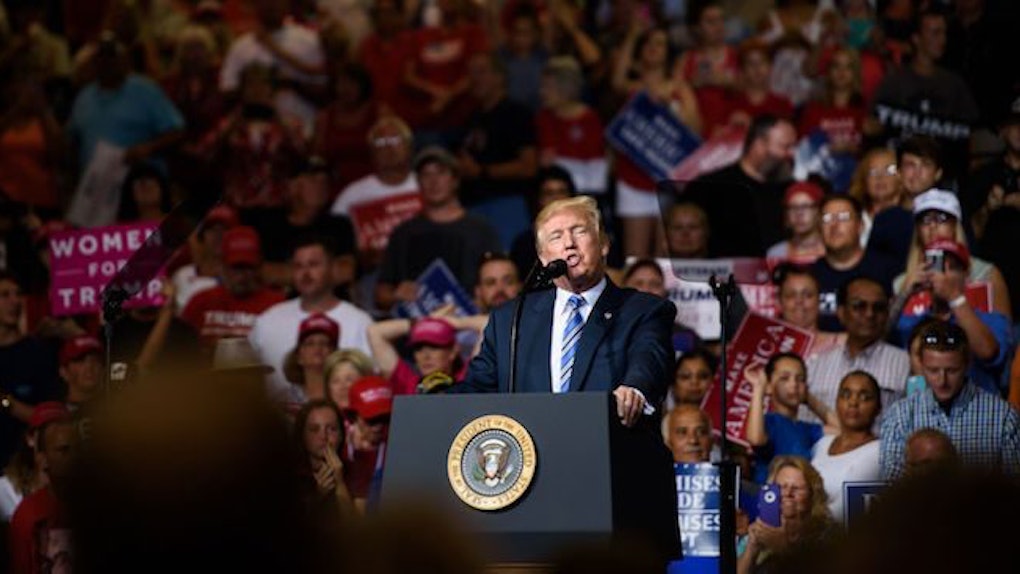 Every single time a president opens his or her mouth, it carries a lot of weight. This is especially true when it comes to global affairs. But President Donald Trump doesn't seem to fully grasp this concept. Trump's "fire and fury" threat in response to North Korea's evolving nuclear program has many experts saying that he sound a lot like, well, North Korea.

Tuesday, Aug. 8, after it was reported North Korea had successfully produced missile-ready nuclear weapons, Trump said, "North Korea best not make any more threats to the United States. They will be met with fire and the fury like the world has never seen." Many viewed this as a threat of nuclear war from Trump, which alarmed people across the U.S. and beyond.

After Trump's remarks, North Korea said it was "carefully examining" a plan to launch a strike against the U.S. territory of Guam. This just goes to show how quickly things can escalate with North Korea, which has been an enemy of the U.S. for decades.

In the past, most presidents seemed to understand they should lean toward moderation while responding to North Korea's inflammatory rhetoric and actions, according to Julie Hirschfeld Davis at The New York Times. Trump, however, is not like most presidents.

Speaking on Trump's rhetoric toward North Korea, former CIA analyst Bruce Klingner told BBC 4 Radio Today, "It seems to be language written by the same speechwriters for Kim Jong-Un. The language is very bombastic, it's over the top -- I don't think it's helpful."

Peter Feaver, who served as an adviser on President George W. Bush's National Security Council staff, told Davis of The New York Times Trump's rhetoric was more "jingoistic" or nationalistic than what he's heard from past presidents, adding, "It borrows a little bit from the tone of the North Koreans."

Senator Benjamin L. Cardin of Maryland, the top Democrat on the Foreign Relations Committee, went a bit further. Cardin released a statement that said in part,

President Trump's comments were not helpful and once again show that he lacks the temperament and judgement to deal with the serious crisis the United States confronts. We should not be engaging in the same kind of blustery and provocative statements as North Korea about nuclear war.

As you can see, a number of people with intricate knowledge of U.S. foreign policy and national security feel Trump's response to North Korea was exceptionally inappropriate -- and they have a point.

There's a danger in overreacting to North Korea.

Trump's response to North Korea was arguably the epitome of how a president should not react to threats from the reclusive communist nation. In other words, there's a strong case to be made Trump overreacted. Experts seem to agree this is precisely what North Korea wants because it exaggerates the danger it poses militarily and keeps it relevant.

While speaking with Gerard Baker of The Wall Street Journal in 2013, former Secretary of State Henry Kissinger warned against overreacting to every little thing North Korea says and does. At the time, Kissinger said,

This is probably the biggest foreign policy crisis Trump has encountered thus far in his presidency. Hopefully, he will learn from this experience and be more careful with his words in the future. Based on what we know about Trump, however, it's hard to be particularly optimistic about him changing in this regard.

This doesn't just impact the U.S. and North Korea.

It goes without saying that nuclear war is a terrifying prospect. During moments like this, both Americans and the wider world likely hope whoever is in charge is carefully weighing all of the factors at hand before making any type of response. Based on how Trump responded yesterday, it's hard to believe he gave the situation much thought at all.

North Korea is an incredibly volatile nation, where the scars of the Korean War are still visible and animosity toward the U.S. is a point of national pride. While North Korea's ability to strike mainland U.S. cities is still open to debate, we do know it poses a direct threat to many key U.S. allies in the region, particularly South Korea and Japan. Any escalation of hostilities between the U.S. and North Korea also puts millions of others in the region in danger.

There's also the fact any conflict between the U.S. and North Korea would almost undoubtedly involve China, which is North Korea's top trading partner and the most powerful player in the region by far. Accordingly, the U.S. has to tread very carefully when it's dealing with North Korea, as the consequences of an armed conflict with it would be catastrophic.