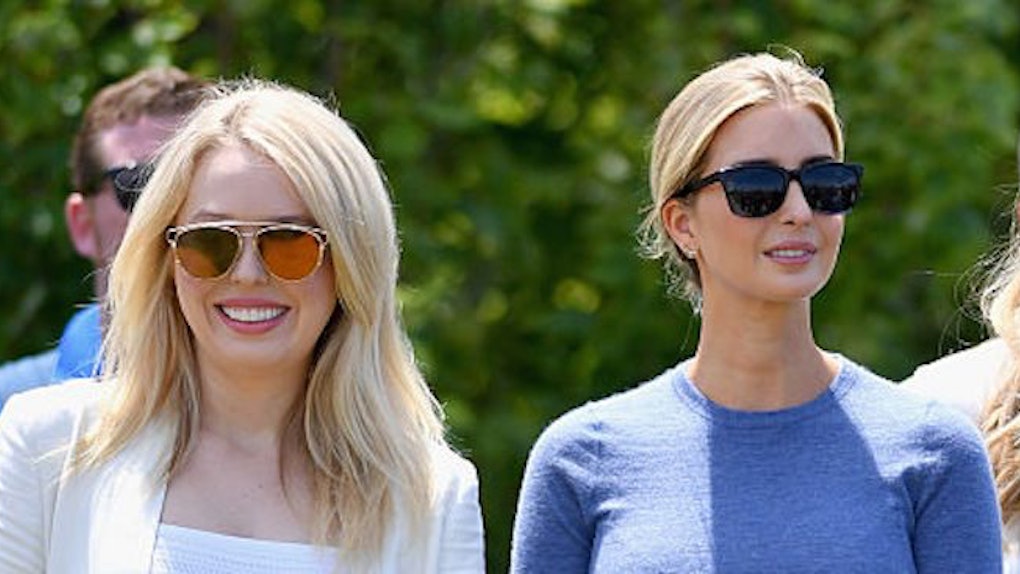 In the old days, holidays were few and far between. Now, however, Easter, Thanksgiving, and Christmas are joined by America's unofficial holidays celebrating everything from ice cream and beer to pets and sisters. Unless you looked at social media, you probably didn't realize that Aug. 6 marks National Sisters Day, but Ivanka Trump tweeted a photo that serves as a little reminder just in case you didn't get the memo.

"Love these ladies. #HappyNationalSistersDay," she tweeted (along with the beloved dancer emojis).

Ivanka is featured in a black and white photo with half-sister Tiffany and sister-in-laws Vanessa and Lara. It's safe to say if people didn't know these four women, they could all be mistaken for actual sisters, though Tiffany and Ivanka seem to sport the most similarities.

Regardless of looks, these ladies all have been under the microscope since their father's (or father-in-law's) inauguration in January.

As of late, it's been reported that Ivanka is brushing up on her reading and using Eleanor Roosevelt's biography as "guidance" and "inspiration," so it looks as though she's attempting to really make an impact within her father's administration.

Meanwhile, Tiffany is one to stay out of the limelight. She and her boyfriend were recently traveling throughout Europe before she gears up to start law school at Georgetown this fall.

Lara (Eric's wife) is following Ivanka's footsteps by getting involved in the administration, and attempting to bring Donald Trump supporters "real news" via videos on a Facebook Live show. Vanessa Trump, Donald Jr.'s wife, is perhaps the most unknown of the four women and doesn't appear to be taking an active role in Trump's administration as of yet.

As per usual, the first daughter's tweet caused quite a few reactions.

Some commented on the women's similarities.

But there were also plenty of positive tweets.

So #HappyNationalSistersDay. Even family photos aren't safe from politics.