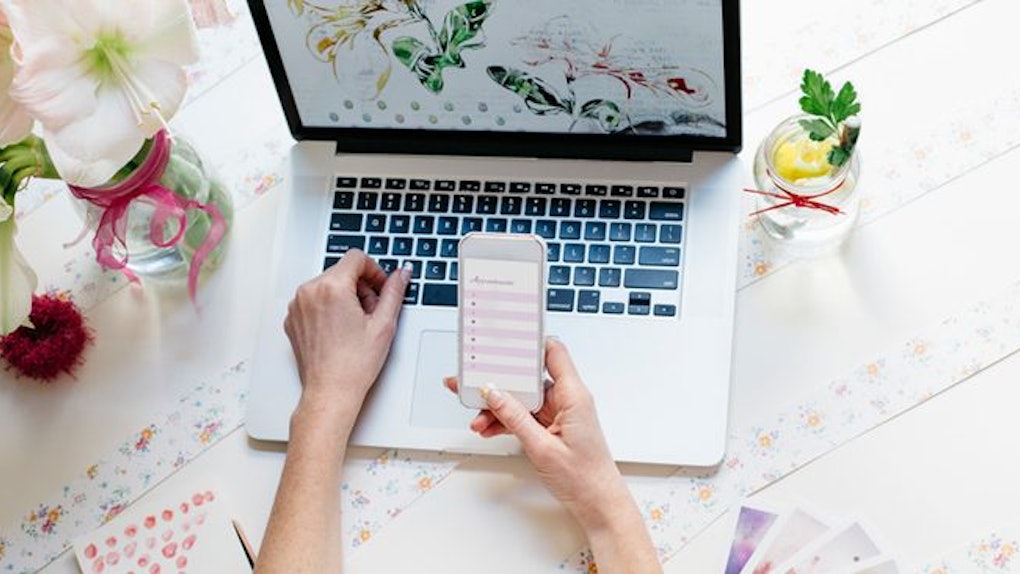 How Does iPhone 8 Wireless Charging Work? Here's What You Need To Know

The highly-anticipated wait for the iPhone 8 has finally come to a close, because today, September 12, is the day where all of our hopes and questions have finally been answered. Hallelujah. We now have major clarity on the latest and greatest in the Apple sphere. People hit up the Steve Jobs Theater in Cupertino, California to get the lowdown on the iPhone 8, and it's safe to say I have hardcore FOMO and wish I was there to hear the scoop in person. Get ready for the grand finale, iPhone lovers, because Apple's chief executive officer Tim Cook made the new model's debut, and it's safe to say everyone is freaking the f*ck out. You may be feeling a tad stumped and overwhelmed AF in front of your computer screen at the moment wondering, how does iPhone 8 wireless charging work, and to be quite honest, you're certainly not alone.

Let me rewind a bit. First off, yes, you heard that right... you don't need a charger for the iPhone 8. If you're a traditional kind of a chick, and currently experiencing all of the bittersweet feels about parting with your charging cord, I can totally relate. This iPhone 8 news is pretty exciting stuff, which I'm all about, but having an iPhone without a legit charger?! IDK IF I CAN DIG IT, APPLE. Even when the iPhone 7 came out and it was time for my upgrade, I cried a tad in the corner when I heard it didn't have an actual headphone jack. But, I digress. If you're the type of person who loses your charger on the regular, or it's literally almost dead and hanging on by the smallest wire ever, the wireless charger sitch is probably music to your very ears.

People, obviously, took to Twitter to share their brutally honest thoughts and feels about the wireless charging, and many users don't seem to be all too here for it.

One person, Steven Bartlett, wrote, "Wireless charging is a step backward. If my phone is laid flat, I can't use it. With a cable, it charges and I can pick it up." Another person replied to the tweet, saying, "I totally agree with this. Can't stand the idea of having to put a phone down to charge. Mine is charging right now, and I can still use it!"

Wireless charging is a step backward. If my phone is laid flat, I can't use it. With a cable, it charges and I can pick it up. #AppleEvent — Steven Bartlett (@SteveBartlettSC) September 12, 2017

I totally see where Bartlett is coming from... especially if you're a commuter who heads into the city for work on the train, you can't really use your phone while it's chilling there charging. The struggle is all too real. Another Twitter user pointed out a bit of hilarious irony in the entire situation, tweeting, "THIS IS NOT WIRELESS CHARGING YOU STILL PLUG SOMETHING IN" (peep the arrows on the picture). Truth, Jarett Wieselman.

THIS IS NOT WIRELESS CHARGING YOU STILL PLUG SOMETHING IN pic.twitter.com/IPQqPHzwBc — Jarett Wieselman (@JarettSays) September 12, 2017

This person is just plain old skeptical about the price tag that comes along with the iPhone X, which, as mentioned before, will also have the wireless charger. The user tweeted, "iPhone X is f*cking gorgeous and I for sure want it, but if the iPhone 8 has wireless charging too..... Not sure about that $999 price tag."

iPhone X is fucking gorgeous and I for sure want it, but if the iPhone 8 has wireless charging too..... Not sure about that $999 price tag — Ego, Living Planet (@SkinderDinder) September 12, 2017