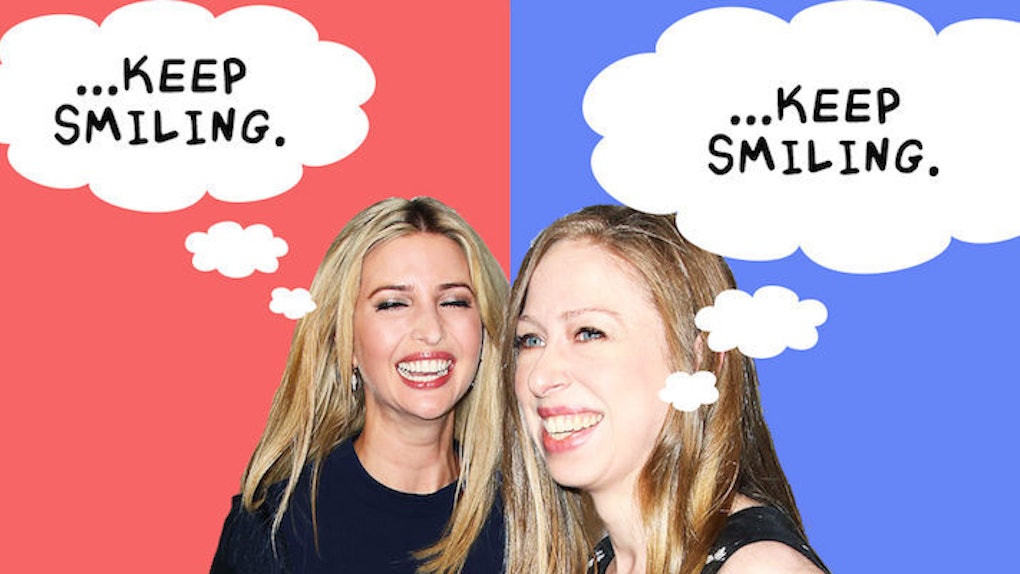 Chelsea Clinton, daughter of Hillary and Bill, will be introducing her mother tonight at the DNC, just as Ivanka introduced her father at the RNC last week.

What many people don't know is that Chelsea and Ivanka have actually been friends for years.

And according to Chelsea Clinton, she and Ivanka Trump have supposedly remained friends, even though their parents are currently at each other's throats politically.

During an interview with Matt Lauer on the "Today" show, when asked if she is currently still friends with Ivanka she said “absolutely” but that she was “disturbed” by Trump's “bigoted rhetoric.” Personally, I suggest you take that "absolutely" with a Trump Tower-sized grain of salt.

As Ivanka put it in her interview with People magazine, “We are [friendly],” but admitted, “There's certainly tremendous intensity around both of our lives right now.” Ivanka and Chelsea's friendship is a lesson in expert level public passive aggression.

As a mom, what I found so disturbing were the things that were being said on a national stage, literally on the stage and off the stage around the convention about women, about minorities, about Muslims, about immigrants.

Ivanka, however still contends that “our friendship has never been about politics.” Honestly, I find it hard to believe that they can keep that part of their lives separate. When everyone in the world is watching your parents try to destroy each other on national television, you're not going out for drinks to "catch up."

Although, it's not surprising that Ivanka and Chelsea became friends in the first place, seeing as their parents, before Donald Trump's political aspirations began taking off, had been friendly for years.

Plus, Chelsea and Ivanka are nearly the same age (Chelsea is 36, Ivanka is 34), both are new mothers (Ivanka has three children, Chelsea two) and both have been thrust into the public eye from an early age. Ivanka says they last saw each other to meet each other's most recent child, both of whom were born in the last four months.

Donald and Melania Trump even invited Bill and Hillary to their wedding.

And here is Donald Trump in 2012 praising Hillary and expressing excitement for her to run for president in 2016.

His tone changed drastically in March when he announced his presidential bid, and he told People magazine, “No we're really not [friendly] anymore. I was friendly with her when I was a businessperson because it was to my advantage to be friendly.”

He also has said she's the “worst secretary of state in the history of the US” Let me quickly remind you that Hillary was secretary of state between 2009 and 2013, and the video above, in which he expresses his admiration for her, is from 2012.

Chelsea also called out Ivanka during an interview with Glamour recently, when she was asked what she thought of Ivanka's assertion, during her RNC speech, that her father would help secure equal pay for women and affordable childcare for all.

Chelsea said, simply, "How would your father do that?"

Given it's not something that he has spoken about, there are no policies on any of those fronts that you just mentioned on his website — not last week, not this week. So I think the "how" question is super important. In politics as it is in life.

So, despite Chelsea's assertion that they are "absolutely" still friends, considering the fact that both women are standing firmly by their parents' actions, I call "bullshit" with a capital "SHIT."