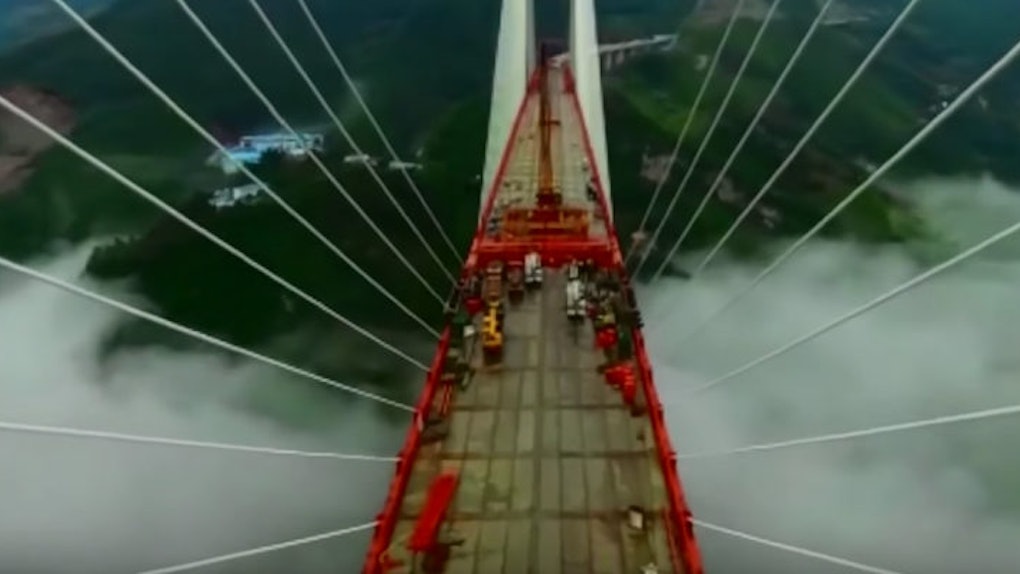 Just because you can build it, doesn't necessarily mean you should.

Like, I could have done without seeing the longest, highest glass bridge in the world, with people just casually walking across it and looking Death in the eye and saying,

Now, the highest bridge in the world has officially opened for traffic.

China's Beipanjiang Bridge is straight-up INSIDE OF A CLOUD, and to that I say, "NO THANK YOU, PLEASE."

This GIF alone is making me want to crawl inside a tornado shelter beneath the ground. How low can I go to get away from this?

At 1,854 feet above a river, the bridge has connected the mountain provinces Yunnan and Guizhou. Hopefully, they get along otherwise this is going to be super awkward.

The bridge has cut travel times by as much as three quarters. And that makes a lot of cents. (Yes, I realize time isn't measured with cents -- it's been a long week, OK? Stick with me. We can get to the end of this together.)

Instead of a four-hour drive, a truck driver said he could now make it in just an hour.

China also boasts the second and third highest bridges in the world: the Sidu River Bridge and the Puli bridge.

The bridge, which is the equivalent of a 200-story building above the water, has four lanes for traffic.

While the Millau Viaduct, a cable-stayed bridge over the Tarn River Valley in southern France, is still the tallest bridge at 1,125.33 feet, China still has eight other bridges on the top 10 highest bridges.

The tallest bridge has the tallest structure, and the highest is the distance from the valley floor.

Citations: China has built the world's highest bridge and it's surrounded by clouds (Metro)