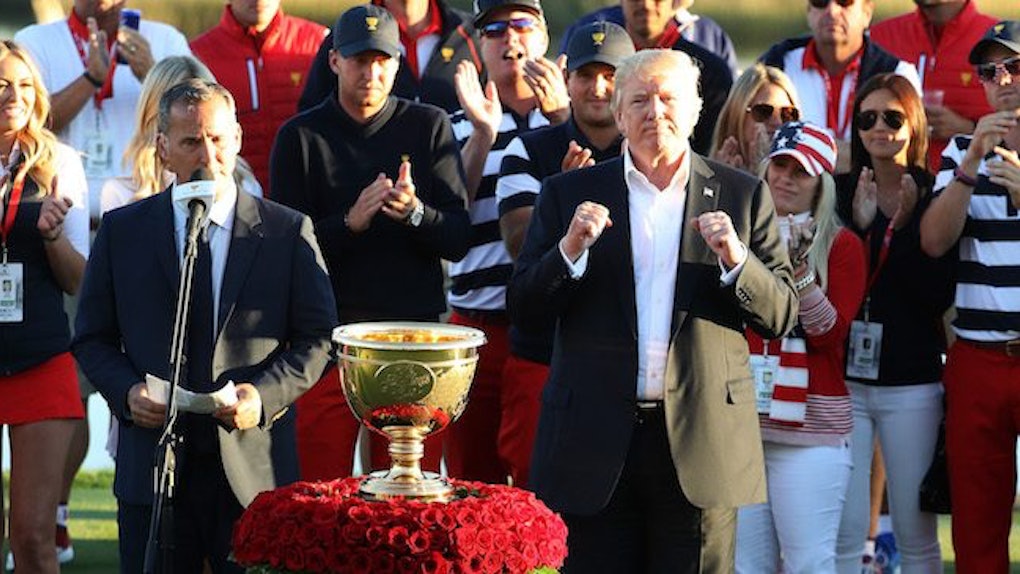 Donald Trump Dedicated A Golf Trophy To Puerto Rico Hurricane Victims, & What Was He Thinking?

Donald Trump's response to the crisis in Puerto Rico has, uh, left a lot to be desired. In the week and a half since the island was decimated by Hurricane Maria on Sept. 20, his most notable statements about the devastated U.S. territory have been to victim blame Puerto Rico for its debt and pick a fight with one of the most prominent leaders on the island. And now, in a jaw-droppingly tone-deaf gesture, Trump dedicated a golf trophy to hurricane victims in Puerto Rico on Oct. 1.

Trump spent the weekend of Sept. 30 at his own golf club in Bedminster, NJ, but was at the Liberty National Golf Club on Sunday afternoon to award the President's Cup trophy — the first time the award has been handed out by a sitting president, according to NJ.com. As he awarded the trophy to the victorious U.S. team, he spoke about the disaster in Puerto Rico, as well as hurricane-ravaged Florida and Texas. He said,

On behalf of all of the people of Texas and all of the people of - if you look today and see what's happening, how horrible it is, though we have it under really great control in Puerto Rico. And the people of Florida, who have really suffered over this last short period of time with the hurricanes, I want to just remember them and we're going to dedicate this trophy to all of those people that went through so much.

That's nice enough, worthy of some polite golf applause, I suppose. Until you remember that Trump himself has been under heavy criticism for heading to a golf resort during a time when millions of American citizens are reportedly without electricity, reliable drinking water, or communication in a disaster zone.

The federal response to the hurricane destruction in Puerto Rico has been criticized as weak, particularly after similar disasters in Texas and Florida.

First responders say that far more aid is needed for the island of 3.4 million. Retired Lt. Gen. Russel Honore, who led disaster recovery efforts in New Orleans after 2005's Hurricane Katrina, noted to NPR that 20,000 federal troops participated in Katrina recovery — in Puerto Rico on Thursday, there were only about 2,200. And Vox points out that Trump could be pushing Congress to authorize an aid package to speed up recovery.

But instead, Trump spent the morning on Sunday picking a Twitter feud with San Juan mayor Carmen Yulín Cruz, after she refuted Trump's claims that Hurricane Maria recovery efforts were "incredible" and "successful."

In a news conference on Sept. 29, Cruz blasted the federal response to the hurricane that left 90 percent of homes in Puerto Rico damaged. "We are dying, and you are killing us with the inefficiency and the bureaucracy," she said. "I cannot fathom the thought that the greatest nation in the world cannot figure out the logistics for a small island," she said in a choked voice.

Trump, in response, tweeted from his golf resort that Cruz had "poor leadership ability" and said that she had been told by Democrats to be "nasty" to him.

For many on Twitter, the fact that Trump would dedicate a golf trophy to people who were pleading with his government for help was just adding insult to injury.

More than half of the territory's residents have no access to drinking water, according to the U.S. Federal Emergency Management Agency (FEMA), and 95 percent of the island is still without power. Beyond electricity and drinking water, many residents lack the ability to use phones or access food, medicine, or fuel, and destroyed roads in more remote areas mean that some towns are entirely cut off, per Vox. Reports have called the damage "apocalyptic."

Mayor Cruz, who is herself living in a shelter after her home was destroyed, said that residents will likely be without power for the next six to eight months as recovery efforts continue, according to the BBC.

So — there are quite a few things that Puerto Rico would likely appreciate more than some congratulatory speeches over a golf tournament trophy.

In the meantime, if you want to contribute to Puerto Rico recovery efforts, Elite Daily has put together guides on how you can help. You can find out more here, as well as learn how to donate food, how to donate clothes, and how to support animal rescue efforts.