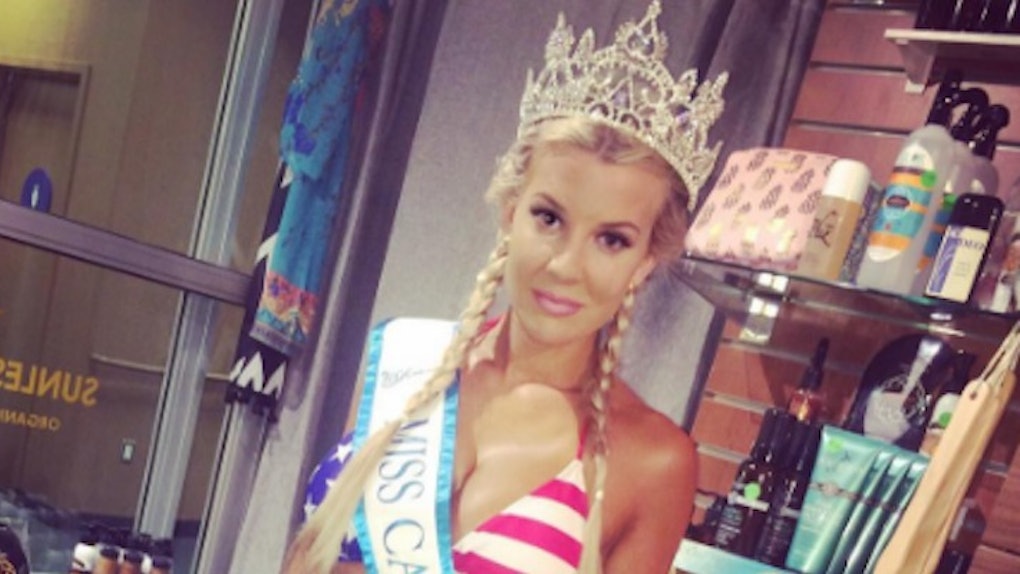 Who Is Baylee Curran, The Woman Accusing Chris Brown Of Assault?

Tuesday a 911 call came from outside Chris Brown's residence in Los Angeles, and he was investigated by the LAPD for allegedly threatening a woman with a gun.

Brown was then arrested and charged with assault with a deadly weapon, but has since bailed himself out of jail. But who is the woman who called 911?

Baylee Curran is a singer and Miss California Regional 2016.

Right after the incident with Brown, Curran told the story on TMZ live, where she reported that the singer pulled a gun on her after she admired his friend's diamond jewelry.

I did not pick it up. I did not try to take it [...] I don't know if it was his friend who kind of triggered Chris, he said don't go near the diamonds started calling me names, he said 'get the eff outside go back outside,' that's when Chris went off and said, 'what did I tell you girls,' and then pulled out the gun and said 'get the eff out of here.'"

According to Curran, she and a friend were hanging out in Brown's hot tub for a few hours before this all went down. She says he had previously kicked out four other girls.

In another interview on Extra, Curran's story was slightly different. She said she and a business partner were going to talk to Brown about future projects and the visit was a "go-see" for a music video.

Apparently, as she was leaving on Tuesday around 3 am, Brown's friend wouldn't give her her phone back unless she signed a non-disclosure agreement. She said she then ran down the street and called the police.

After Curran called, the LAPD had Brown's house surrounded for 11 hours while they obtained a search warrant.

Brown came out of his house around 2 pm. Police say he and his friends have been cooperative.

Later Tuesday, Curran posted this clip on Instagram, where she says,

Do you all honestly think I wanted this? And I caused this? If somebody put a gun to your head, what would you do? Call the police?

This was her response to fans accusing her of pulling this as a publicity stunt.

According to Brown, Curran and her friend were "uninvited," and he was sleeping when all of this occurred.

Brown's fans are flooding Curran's Instagram posts with hate and saying her stories don't match up.

Citations: CHRIS BROWN Alleged Victim HE PULLED GUN AFTER ARGUMENT OVER JEWELRY (TMZ), Chris Brown is led away after being arrested on suspicion of assault with a deadly weapon following 11-hour standoff at his $4m mansion where he 'pointed a gun at beauty queen's head' (Daily Mail)