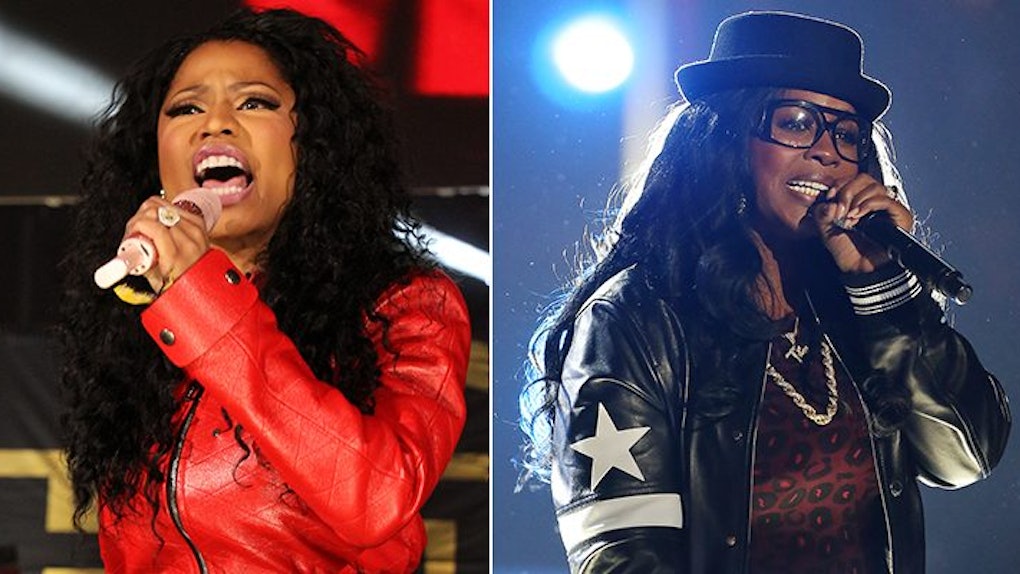 If you weren't up late on Thursday night, then surely you noticed the big rap news by Friday morning.

Yes, Nicki Minaj finally responded to Remy Ma's diss track, with a record titled "No Frauds." Because of that response, the subplots that first developed when this rap beef started a couple of weeks ago are back in the limelight.

You know the ones I'm talking about:

"How will Nicki comeback?"

"Did Remy Ma finish her from the start?"

Those conversations are once again en vogue on Twitter, and they are definitely entertaining, too.

But there's one topic I sincerely hope doesn't comeback with all the rest. It's a topic that's pretty ridiculous, given the industry we're talking.

That topic is the idea that Nicki Minaj and Remy Ma rap battling means they are tearing each other down as women.

From what I've gathered, the people who share this thought have a range of beliefs that begin somewhere around "everyone entertained by this beef encourages women bashing," and ends near "we can't say Black Lives Matter if we applaud two black artists coming at each other."

Take actor Kofi Siriboe, for instance, who had this to say on the Nicki-Remy beef:

And to that statement, I have a simple, seven-letter: Um, yes. TF?

First off let's dispense of this notion that any one group of people needs to behave absolutely perfectly to have the right to ask for their humanity to respected. That's trash.

Secondly, if being entertained and engaged in a genuinely hilarious pop cultural subject is considered "support," then hell yeah I'm supporting the Remy-Nicki beef.

Also, the next time it's time to fight for women or black lives, literally last thing I'll be thinking about is how I laughed at a couple memes about two rappers.

If people can't respect Black Lives Matter or any women's march because of damn rap beef, that speaks more to their lack of integrity than anything else.

I mean, you can say they're women-bashing, I guess. And, of course, I can see how there's a heightened sensitivity to the idea of encouraging slander of women (given how poorly society treats women in general).

But what Remy Ma and Nicki Minaj are doing is actually rapper-bashing, which is, you know, kind of what rappers do.

Nobody was out here crying for Meek Mill when he was getting dragged all over the floor by Drake.

Nobody was crying for 50 Cent or Ja Rule when they were going at back in the day, and there definitely wasn't anyone crying for Jay Z or Nas.

We expect rappers to go at if, and we expect it to get nasty.

If that means talking about plastic surgery, dragging skeletons out the closet and making empty-but-sonically-pleasing threats, then so be it.

That's just how the game goes, and just because the players have long hair and curves this time around doesn't mean the rules should change.