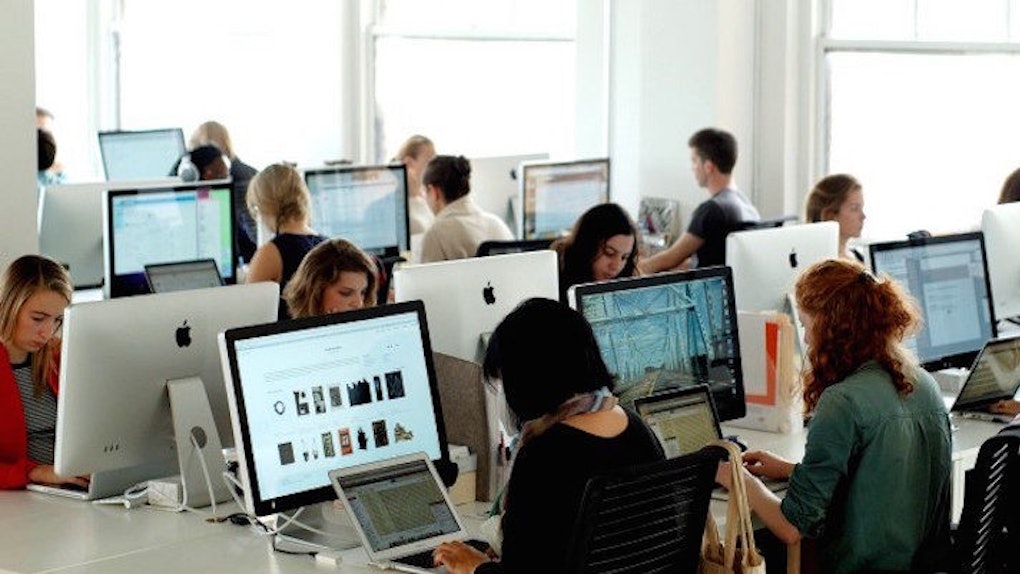 4 Ways This Generation Could Bring Big Change To Corporate America

We're known as the hipsters of the 21st century, shamelessly fighting for our right to love, live and work.

We let our hair grow long. We get creative with flowers. We fully embrace the benefits of plant medicine. We have absolutely zero f*cks to give.

We're Generation-Y, and we're changing the rules society has worked so hard to push on us.

Although we fight for the right to be ourselves, our attitude toward life is a double-edged sword.

As the generation of Baby Boomers is getting (extremely) close to the retirement age, their jobs must be filled by modern, tech-savvy individuals who can not only run a company, but also care for it.

Generation-Y is the next generation in line for the Baby Boomers' corporate positions, as we grew up with technology, quickly adapting to the never-ending changes in the tech world.

We're quick to find solutions and can create big changes when we put our hearts and heads together. Unfortunately, we have zero f*cks to give.

1. We'd rather be free than in a stuffy cubicle.

We believe in traveling the world, backpacking through Europe and escaping to a secluded island somewhere far away.

We want to express ourselves as freely as possible, and if that means having a sleeve tattoo, we're not going to stay "clean" because the boss said so.

Negative Outcome: Not all of us have this view on life, but there is still going to be a shortage in Generation-Y job seekers when the Baby Boomers leave for retirement.

We'd rather take a part-time job while traveling the world than sit in a cubicle for 10 years. If we don't find a way to provide for ourselves and family for the long-term, our financial future can be at stake.

Positive Outcome: We're the entrepreneurial generation. We're so set on not living a life of cubicle hours, we're going to do anything to escape that fate.

We start companies, online and offline, to ensure our freedom, bringing more jobs to the economy as we do it.

2. We were raised without fear.

Our parents' and grandparents' generations were raised in fear-driven environments, as family discipline was (way) different than it is today.

There was a hierarchy in families that needed to be respected, no matter what. A loose burp at the table wasn't a laughable matter, as it is in some homes today.

If our parents burped at the table, a hand hit their head before they could even utter the word "sorry."

Our generation, and the ones after us, were raised and will be raised in more amicable environments.

Our parents aren't our superiors; they're our friends. We're not scared of them, which lead us to grow up in a very freeing environment.

Two weeks without TV? Sure. I'll find a way to watch TV anyway.

Negative Outcome: This no-fear environment led us to live a life where we're completely unaware of consequences.

We text and drive, even though it's completely dangerous. We're not scared to voice our opinions, even when we need to shut up.

We have fully embraced the laissez-faire attitude, even when we have to be responsible.

If not tamed, our no-fear attitude can crash the companies we manage.

Positive Outcome: We're not scared to go after what we want. When we set our hearts to something, we are focused and forget all about obstacles, consequences or threats.

When leading a company, it's often the way to go. There needs to be a balance in this no-fear attitude, though, in order for it to work well.

3. We're not big fans of conglomerates.

Thanks to the Internet, we're more aware of the dangers of tobacco, highly-processed foods and over-conservative thinking.

With all the information thrown at us every day, often uncovering the despicable actions of large conglomerates, it's safe to say we're not going to fight for a position in one of those big companies.

We judge people who work for those large conglomerates, paying workers a laughable salary and profiting from people's suffering.

We prefer socially-active companies that not only take good actions, but promote them. We'll gladly give up the prestige if it means sleeping soundly at night.

Negative Outcome: Conglomerates exist for a reason. Although we may not be fans of them, someone must manage them in order for whatever balance they created in society to remain.

We're the generation that can make a change in those corporations, by slowly implementing our ideology into the system.

We fight loudly against them, but it might be time to change our tactics. They're obviously not listening.

Someone needs to take the manager's position once he or she retires. It better be our generation that makes that social change.

Positive Outcome: If no one wants to work for the conglomerates, they'll stop having so much power.

We might be able to create a change in the world by subtly promoting a more social-friendly corporation, instead of one hungry for money.

4. We believe more in happiness than we do in financial security.

Our parents worked hard to give us the comfort we had growing up, and although we're extremely thankful for everything they've done for us, we don't want to end up like them.

We don't want to sacrifice our happiness, social lives, wellbeing and relationships for a secure paycheck.

We'd rather invest in our happiness than our careers, which is why we'll often opt out of the norm when it comes to career path.

Succeeding at life isn't reaching the top of the corporate ladder with a check in our mouth, it's being able to smile at our present life.

Negative Outcome: We're not too keen on joining the career force, so we'll delay it as much as possible.

If we're not ones to think outside the box, our financial future can be at risk. Some companies can also crash, creating economic problems, as our generation refuses to enter the corporate world.

Positive Outcome: We invest in experiences, which will actually make us happy, even if our life is not filled with riches.

People say we're the biggest generation after the Baby Boomers. It's time we start acting like it.

Do you think our generation has what it takes to lead corporations forward?